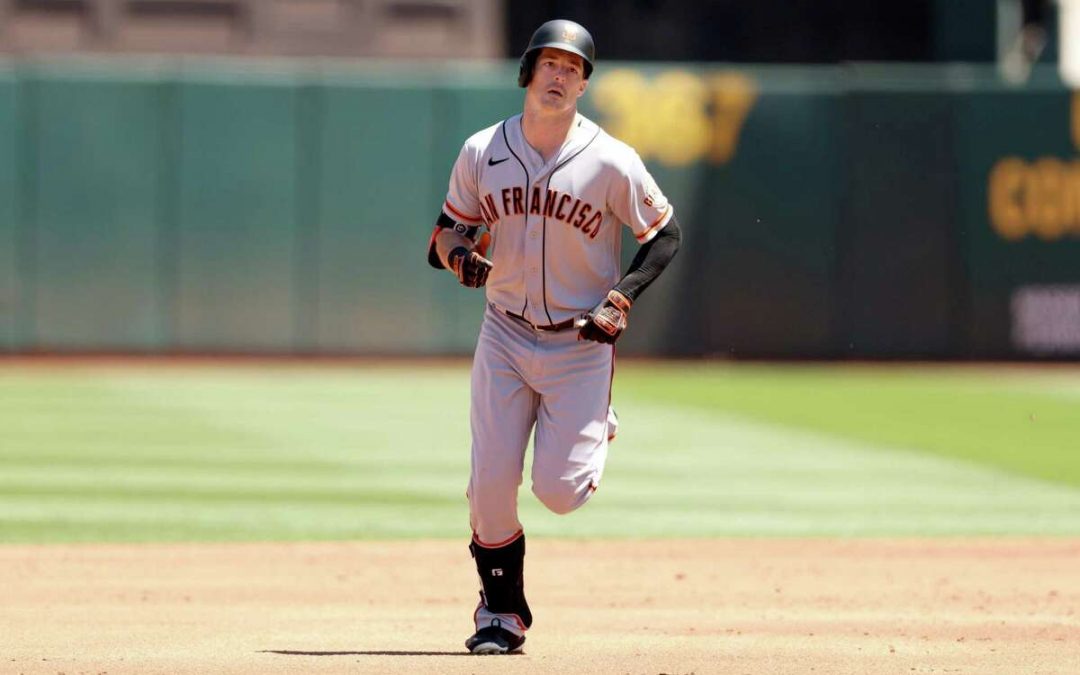 Look, I have friends who are, sadly, A’s fans. I go to Berkeley and Oakland often. I dig the jazz scene. I dig the bookshops along Telegraph. But I am a San Franciscan through and through so I hate the A’s. I hate it when the A’s beat the Giants. This weekend felt good.

Hey, when you just got your ass kicked by the Dodgers on your own turf you have to take the small victories as they come. Bay Bridge Champions? Yes, dammit! The battle between the A’s and Giants actually has a long and interesting history dating back to the early 1900s. The Oaklanders hold a 72-68 advantage in regular season games but the Giants have won three of the last four Bay Bridge Series trophies.

The Giants swept their two-game series in Oakland with most of their full squad back. Remember how much different, how less potent and how defensively compromised this Giants team is without Belt and Crawford and Longoria. Over the Weekend Belt and Crawford rejoined the team and the results were immediate.

The Giants clinched the Bay Bridge Trophy in long ball fashion with Yaz going deep twice and Thairo Estrada hitting a home run as well in their 6-4 win in Oakland. Yaz went 2-4 and drove in three runs on the day. He now has 11 homers on the season. His first dinger came in the top of the third and went out to right center at a distance of 409 feet.

Like a good neighbor, Yastrzemski is there 🙋‍♂️ pic.twitter.com/Fcgs17bv2I

The Estrada homer came in the top of the sixth inning with the Giants winning 2-1.

The second Yaz blast came in the top of the 8th inning with Brandon Crawford on base in a 4-2 game.

It gave the Giants an important four-run cushion as the Giants pen had a few leaks in the seventh and eighth innings, making the game a close one. Dominic Leone, in particular, had a rough inning in the top of the eighth.

Let’s not forget the difficulties even the great Giants teams of the recent past had against the Oakland Athletics.

BCraw had two hits and looked great at shortstop in his return from the Injured List.

Logan Webb threw seven strong innings allowing only two runs on four hits with five strikeouts and three walks. He also earned the win, his tenth, in the process. Webb is now 10-5 with a 3.17 ERA. He needed this win after a rough stretch. The Athletics are the cure for what ailed Logan and the Giants.

The Bay Bridge Series is ours 🏆 pic.twitter.com/hsbkIaVt0c

The Giants throttled the Oakland Athletics 7-3 Saturday thanks to another sterling start from Carlos Rodon and home runs from J. D. Davis, Joey Bart and LaMont Wade Jr. This was the game that looked very 2021-ish with all the Giant homers and the beautiful starting pitching. Rodon would win his tenth game of the year. So on back-to-back days, Rodon and Webb reach ten wins. That makes for a nice weekend in my book, good for at least one extra celebratory Bloody Mary.

Here is the Davis homer. It was officially recorded as a 437 foot long ball. 437 My EYE! That ball went at least 460 feet if it went an inch. F-juyK you Athletics scorekeepers!

Joey Bart continues his resurgence with two hits and has raised his batting average to .211 after it was far below the Interstate for the better part of the season. Keep it going Joey.

And the Wade homer, because it’s Monday:

Hol’ up, Wade a minute pic.twitter.com/Oa7EgVc16N

Rodon ended up pitching 5 1/3 innings and allowing only one run on 98 pitches. Yes, that’s a lot of pitches for 5 plus innings, particularly when you only allow one run on five hits with zero walks. But the story goes much deeper. Home plate umpire Phil Cuzzi had one of the worst games you will ever see from a Major League ump. His balls and strikes calls were hideous, giving him a score of around 90% accuracy for the game. That is very bad. His calls also added .62 runs for the Athletics. Think he has a problem with the Giants? Let’s remember he was the man in blue who tossed Gabe Kapler and Jarlin Garcia last week when there were hot emotions in that terrible Dodger series in San Francisco. Just saying…

With a three-game series coming up starting tonight in San Diego. The Giants needed these two weekend wins in Oakland. The boys righted their ship and face a Padres team that was humbled by the Dodgers in LA over the weekend, getting swept in three games and getting outscored and out-pitched by a ton. Juan Soto has a lower batting average than Wilmer Flores. Put that in your San Francisco sourdough and bake it.

So, the Giants are nearly at full strength now and it makes them an infinitely better team, at leas a .500 club by my measure. We shall see what the week holds but let’s not forget it has been a weird week for the Giants, who made tiny, nonplussing moves at the deadline and decided not to deal Pederson or Rodon, Slater or any other asset they had. Frankly, as Dr. Lefty mentioned, I think Zaidi decided too late in the game to put Rodon on the block and it cost him. Had the Chief of Giantsland made it clear to executives on other teams that Rodon was available for the right price, say in early July, it is likely the offers would have been better, opt out clause or not. It cost the Giants and now it looks like this organization is stuck in idle while the Padres and the Dodgers pile on the talent and load up their farm teams with awesome draft picks.

Speaking of opt out clauses, can the Giants just stop with them? No player should have that type of leverage over a team, particularly in a short contract like Rodon’s (two years with an opt out after one season after 110 innings pitched, which he reached recently). It was claimed by many baseball pundits that the opt out clause was a deal-breaker in potential trade talks. If so, then the Giants made a big mistake with the contract.