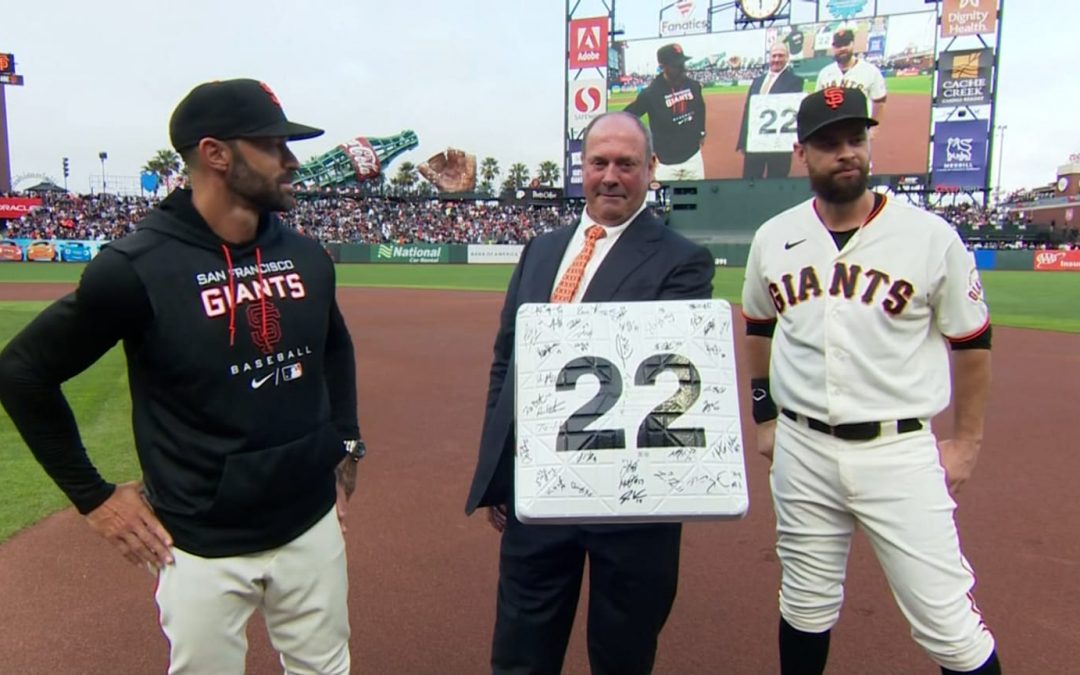 “I am Will the Thrill Clark. I am part of San Francisco. And I am forever a Giant.” 👏 pic.twitter.com/EmgusRTpVd

And now his #22 hangs in the rafters at @OracleParkSF pic.twitter.com/MmT13dnsAy

A Happy Will Clark Day Indeed

Saturday was Will Clark Day. As we all know the ceremony was delayed for two years due to Covid-19. The Giants made it a fantastic ceremony and Will the Thrill’s speech was equally sensational.

Dr. Lefty wrote a beautiful tribute to Will Clark and included her personal recollections as a fan. It needs to be read by every Giants fan.

Here is Will Clark’s Retirement Ceremony from Saturday:

Here is a Will Clark Tribute video narrated by Mike Krukow:

Here is a fun Will Clark Highlight Video:

My favorite Will Clark memories include his amazing sweet swing. His ability to go the other way with power and his overall classy, graceful and hardass approach to playing baseball. Watch that speech! He still has it!

Oh, and the Giants Won!

On Saturday to celebrate Will Clark Day the Giants had to win and they did. They beat the Cubbies 5-4 propelled by back-to-back home runs by Luis Gonzalez and Joey Bart. It was a banner day at the yard until the Giants coughed up three runs in the ninth on just more horrid infield defense. We will get to that subject in my Black Monday Wrap© below.

In the game the Giants managed only seven hits and struck out ten times but they got the runs they needed and the pitchers did their job. Jakob Junis (quietly have a very good year) started this bullpen game and pitched four innings of shutout baseball and allowed five hits while striking out four and walking one. He was on. In the process he lowered his ERA to 2.78 and threw 73 pitches, up about ten from his previous outing. If the Giants can get him to 85 in the next start he can hopefully go five or six innings.

Junis was relieved by Tyler Rogers who pitched two excellent shutout innings. He struck out three and did not allow a hit. This may have been his best outing of the season.

Jarlin Garcia and Marte followed with Garcia allowing a run in the 7th, the first for the Cubs. The difficulties began in the ninth when the Giants could not make basic plays like fielding slow rollers and turning a double play with Wilmer Flores at second. Each non-play cost them a run and made the game interesting until Camilo Doval earned the save by getting Ian Happ to ground out to second. He represented the tying run at the time as the Cubs were rallying and had a runner on base. It was a nervy ninth but the lads came through.

Since you’ve been Gonzooo, I can breathe for the first time 🎶 pic.twitter.com/KbJWbU8HUE

Carlos the Magnificent is back. After two starts that were not as bad as the numbers (due mostly to horrible defense behind him) Carlos Rodon pitches a seven-inning gem in last night’s primetime 4-0 win over the Cubs. He was simply magnificent, mixing fastballs up and away with heaters in to both righties and lefties.

He allowed two hits and struck out ten in the outing and was basically untouchable except for three hard hit balls that were caught in the outfield. Neither play was routine, especially the home-run robbing catch at the left field wall by Luis Gonzalez. That ball was hit off the bat of Christopher Morel who was leading off the game at the time. It was a huge play and one that earned a standing ovation from both Rodon and the Fans. It may have been the play of the game and it certainly helped set the tempo.

The next time you ever hear defense does not matter in baseball just show them that play.

Once gain the Giants had more strikeout (11) than hits (9) but because of the big hits by Austin Wynns and Jason Vosler, and Rodon’s shutdown performance, the game was never in doubt once the Giants put together their four-run fourth inning.

One note about the game: Thairo Estrada was hit in the head with a fastball and was removed from the game after the at bat. The pitch appeared to hit him on the ear flap and Gabe Kapler reported that the Giants will run a full diagnostic for a concussion. Come back soon Thairo!

The Giants made a trade with the Cubs yesterday:

It’s always peachy writing after two wins. The win yesterday gives the Giants  3 of 4 from the Cubs in San Francisco after the boys had lost seven in a row coming out of the All Star Break. With a win on Will Clark Day, the Giants have now won on Buster Posey Day and Will the Thrill’s day. Let’s honor every Giant player from 2010, 2012 and 2014 for each home game the rest of the season. You never know. It might work.

But seriously, the Giants are now 51 and 51 and at the level of respectability. They are four games behind in the Wild Card Standings. You never know. Now with the trade deadline tomorrow we will see how Farhan Zaidi feels about this team but let me tell you how Johnny Black feels: Sell baby!

With the Luis Castillo trade the Giants should get a very good haul for Rodon. if not, they have to throw a pile of money at him and keep him. Letting him walk away is not an option the Giants can afford to take.

They have other fungible assets not named Logan Webb and they should build on them, utilize them to get better defensively and more athletic. The Giants are in desperate need for youth and players who can actually play their position. Want to see what I mean, just watch the highlights from Saturday night’s game in the top of the ninth when the Cubs scored three runs on plays that simply have to be made by a Major League Baseball team. Wilmer Flores should never play anywhere in the field again, other than first base in an emergency situation. He is no second baseman. When I critique analytics and the over-emphasis, myopic devotion to alternate stats on the offensive side of baseball you will understand why once you see those highlights. Granted, in 2021 the Giants platooning and depth did their job to marvelous effects. The 2022 year club: Don’t ask. To use the injuries of Evan Longoria, Brandon Belt and Brandon Crawford as excuses when you know their ages and the chronic issues with Belt’s knee and Longoria’s everything, you are simply not paying attention and planning well.

I could go on about the outfield, the decline of LaMonte Wade Jr.. Desclafani’s injuries, and so on but that would be a downer. Yes, the Giants are “in it” at four games behind for the Wild Card hunt but really, should you really make long term decisions, big decisions based on that hope? Or would it be more prudent to plan for 2023, 24 and so on? I believe August 2, 2022 may be the single most important day in the Zaidi era. If he whiffs on it, he will not last two more seasons. If he succeeds, the tide may turn for the better.