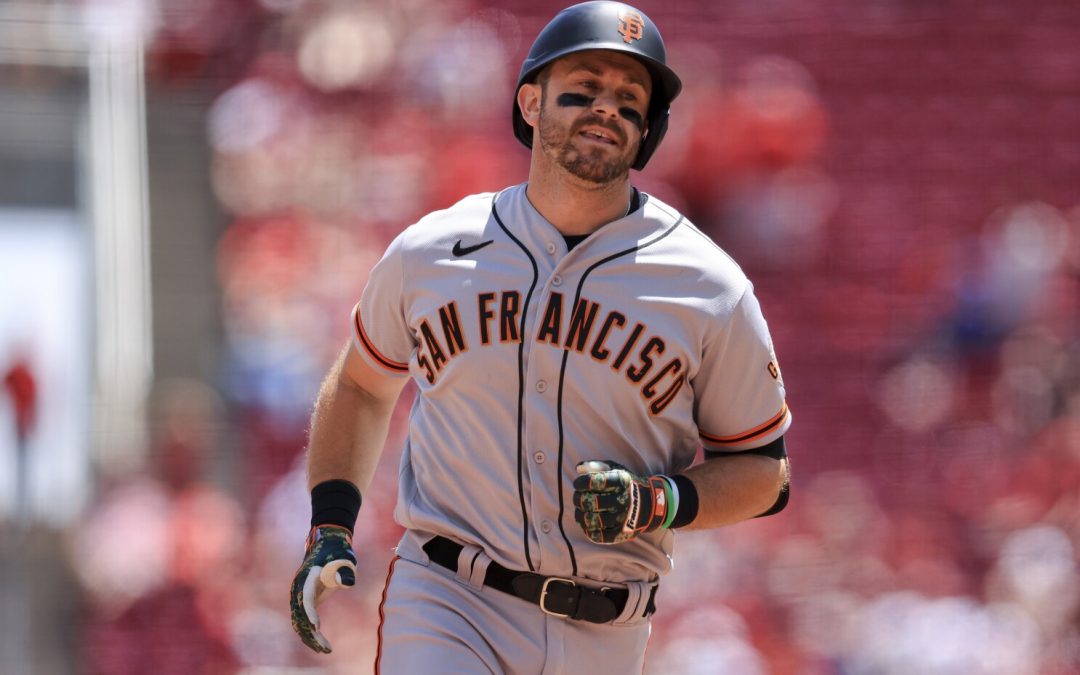 Good Morning Giants fans… Well, What a weekend it’s been! Where do I start?

In his series preview post on Friday Greek Giant wrote that losing 2 of 3 games to the Reds would be “the end of the world.” I hesitate to think of getting swept…. It turns out this Reds team is not the same one that started out 3-22. They have learned to win a few of late and have the second best record in the league behind only the Dodgers of Los Angeles, and they are playing the Giants like its 2012…

Since the weird weekend in Cincinnati saw the Giants scuffle but end on a positive note. Let’s start with Sunday’s game.

Yesterday’s thrilling 6-4 win over the Reds made sure the Giants were not swept against the worst team in baseball, and, to this point, one of the worst ever. Evan Longoria hit a huuuuuuuge three-run home run in what turned out to be a six-run top of the eighth inning in a game that saw the Giants no hit through 6 2/3 innings by Red right-hander Tyler Mahle who was throwing darts and putting up zeroes in alarming fashion, so much so that until the eighth inning this game had “series sweep clincher” written all over it.

Since there was an early start Dave Fleming kept remind us listeners that it was likely the Giants were operating on California time: in other words, their bats and their bodies were still asleep. Thank God for that eighth inning that saw them wake up just in time. The magical eighth began with a one-out LaStella double and a two-out walk to Wilmer Flores. Joc Pederson singled to shallow center to get the Giants on the board. Longoria followed with his bomb to make the game 4-2 Giants. The homer came on a 3-2 pitch. the 3-1 pitch was called a strike after Longoria thought it was ball and was about to head to first with a walk. What a turn of events!

Longo for the lead 👏 pic.twitter.com/0WYHZrm3TP

As you can see by the video, the home run came on a fastball off Art Warren and down and in the middle of the plate. The ball was smoked and gave life to a Giants team that was more or less catatonic after losing the first two games of the series, both in bewildering fashion.

“It’s good to feel some success in a big situation. I felt like that was something that the team definitely needed. … The last three days, it seemed like we were kind of waiting for somebody to get a big hit. I was obviously happy to be the guy to come through in that situation.”

This homer almost wasn’t because Evan Longoria was nearly ejected from the game earlier in the day. He was getting frustrated with balls and strikes calls and had a few words with home plate. The most egregious example was leading off the top of the fifth and with a 3-2 count Longo took a slider low. It looked like a ball and Longoria thought so too as he was making his way to first. Unfortunately the Ump rung him up like a seventies yellow telephone with a crinkly twisted cord. The Giant third baseman was NOOOOOOt happy.

“I think what was most impressive for me about the day for Longo was how he stayed composed when there were several calls made on him that could have gone the other way. I personally find it admirable for people to be strong-minded through those situations and not let those things get the best of them. Stay focused, stay locked in, and then deliver like Longo did.”

The top of the eighth inning was not over for the Giants however as Brandon Crawford walked and Thairos Estrada singled, putting two on. Luis Gonzalez followed with a two-run double to left to make the game 6-2.

The double by Gonazalez was a thing of beauty: an opposite field liner down the left field line that had a “patented by Will Clark” feel to it. It was beautiful. Luis Gonzalez may be this year’s LaMonte Wade Jr. He is a find. He has been invaluable.

It turns out those were crucial runs as the Reds would score two in the bottom of the ninth inning to make a game of it.

Those runs came courtesy of a two-run homer off the bat of Almora Jr. and was served up by Camilo Doval.

Alex Cobb pitched a superb game going six innings allowing only two runs, the first of which came on a seeing eye grounder through the hole in the left side of the infield. He recorded eight strikeouts against three walks and four hits. His fastball and his slider were both outstanding. The Giants lost Saturday’s game 3-2 after out-hitting the Reds 12-5. With two outs in the top of the ninth Wilmer Flores rocketed a single to right field with Joey Bart on second base. Bart, getting the green light, as he should, was thrown out by about 15 feet by Red right fielder Aristides Aquino, who fielded the ball cleanly on one hope and fired an accurate throw. His play was clinically brilliant and one cannot fault the Giants or Bart. It was not their day.

Here is Giant Manager Gabe Kapler on the decision to send Bart:

“It’s a tough call, but we and I completely support the decision. You have to make the outfielder make that throw. It’s hard to get two hits in a row, and there’s a chance it could be offline.”

The Reds got their runs in the bottom of the first inning when Kyle “I love to face the Giants” Farmer hit a three-run homer to left center off Alex Wood. The pitch was down and in and in Farmer’s wheelhouse, a “fastball” cruising in around 90 mph… Suddenly it was 3-zip Cincy and you could hear Giants nation collectively sigh “oh boy!”

Longoria hit a home run in the top of the sixth but the Giants left 11 men on for the day. It was rough and tumble game that harkened back to the mean and lean Giants-Reds games of 2010-2013.

The National Anthem and the Disappearing Giants

Soooooo, it could not be a weekend wrap without covering an underlying issue that emerged on Friday when Gabe Kapler stayed in the clubhouse during the playing of the National Anthem. The Giants Manager’s decision was a protest against the direction of the country, or something along those lines (the actual quote goes “Until I feel better about the direction of the country”, which was presumably in response to the recent mass shootings in Buffalo and rural Texas.

“I just don’t plan on coming out for the anthem going forward. Until I feel like there’s — until I feel better about the direction of our country. So that’ll the be step. I don’t expect it to move the needle necessarily, but it’s just something that I feel strongly enough about to take that step. The rest of what I wrote, I think explains that.”

Hmmmm… Where to begin? First, let’s take this from the perspective of Giants fans: The Manager is not just the field manager but also the symbolic leader of the team. His decisions, his words, and his actions carry a lot of weight, more than say, Joc Pederson’s or the Batboy’s. It’s just the way it is.

As a Giants fan I find it hard to make the relationship between political protest and the Giants. I just do not see how his action is appropriate and how it does not detract and distract from the Giants trying to win baseball games. It strikes me as a bit egotistical, the Manager making a political statement of exceptionally abstract proportions. I get the intent. I am sure Kapler is a nice guy. I am sure we agree on the issues at hand and on most of the divisive crazyiness we call American politics today. It’s just, It’s just that… welllllll He is in uniform. He is representing the team. Sooooo I don’t like it. It seems a bit opportunistic and empty, a bit of a grandstanding gesture.

Yesterday, the Giants as a team did not take the field for the National Anthem….

This has been your Weekend Wrap.