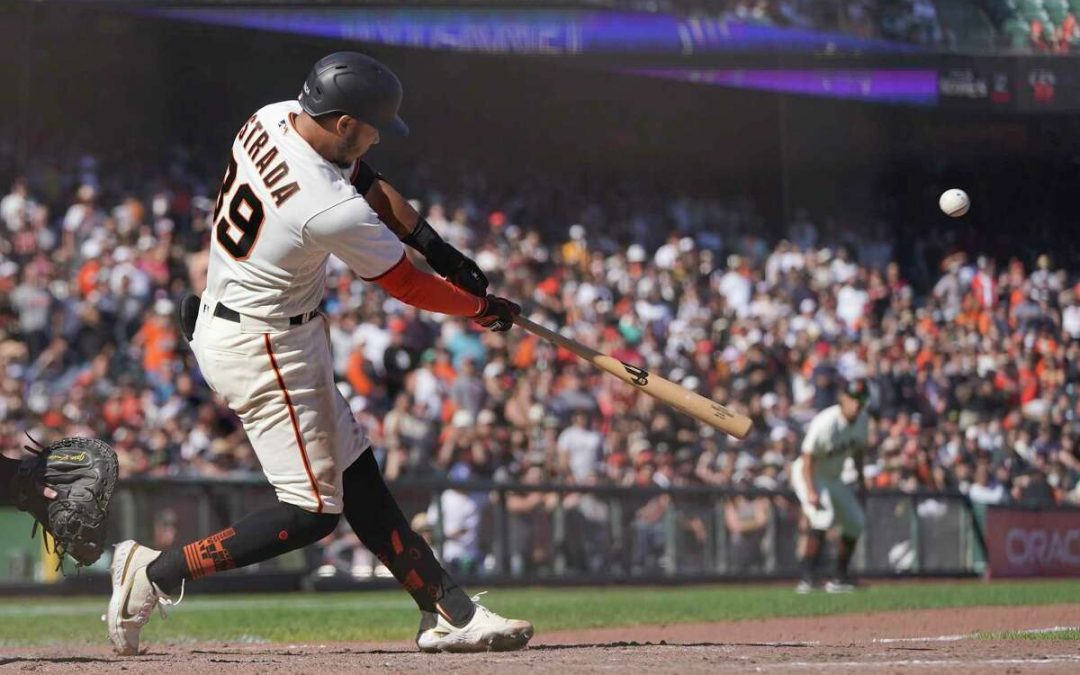 The Giants are back at .500 thanks to a thrilling, come-from-behind, grab victory form the jaws of defeat type 8-7 win yesterday to sweep the Pirates. Thairo Estrada’s two-run home run with one out in the bottom of the ninth inning and the Giants trailing 7-6 was the difference-maker and put an exclamation point on what was a celebratory weekend. On Saturday the San Francisco Giants Baseball Club Limited honored the 2012 World Series Championship team. It was the tenth anniversary celebration that had been postponed two years ago because of the pandemic.

On this bright, beautiful, and raucous Sunday the hometown fans got to witness a crazy, back and forth game. It was one of the most insane, agonizing and shocking wins of the 2022 season.

To be honest, this was also an ugly game with the Pirates and Giants making enough blunders on the field to field to write a manual on how not to play baseball. But hell, sometimes that happens and even when the Pirates gifted runs to the Giants the Giants bullpen did their best to return the favor in the form of hittable pitches to players like Brian Reynolds and co.

The Giants blew a five to zip lead after the Pittsburghers scored three in the top of the fifth and three in the top of the seventh to take a momentary 6-5 lead until the Giants plated a run in the bottom of the seventh to make it a 6-6 game heading into the dramatic ninth inning in which Pittsburgh scored a run on an Evan Longoria throwing error in their frame setting the stage for Estrada’s heroics.

Wilmer Flores went 3-4 in the game.

LaMont Wade Jr. hit a three-run homer in the bottom of the second inning.

Here is Estrada on his game-winner:

“I enjoyed every minute of it. As soon as I made contact, I knew it was gone.”

Alex Wood pitches six innings and threw 101 pitches giving up three runs. Not bad for your number three starter. But John Brebbia did not retire a batter in his outing, allowing three runs. It was ugly.

FIRE IN THE HOLE 💣 pic.twitter.com/NPGoiUHnoQ

Saturday was a banner day as well as the Giants began the evening with a celebration of the 2012 World Series Championship team. Bruce Bochy was there. So was Marco Scutaro. Ryan Vogelsong made an appearance and the boys had smiles all around. It was grand.

The 2-0 win came courtesy of one Logan Webb, who pitched eight shutout innings and earned his eleventh win of the year on the day after Carlos Rodon earned his eleventh victory. I like how those two operate. The Giants were aided by a strong hustle play by Logan Webb as well when he fielded a slow roller near the first base line and ran and dove to tag the base just before the runner. It was quite theatrical and it worked.

LaMonte Wade hit a solo homer. The Giants had four hits on the day but Tyler Beede, the former Giants number 1 pick, was bested by Webb.

Joc Pederson’s RBI double in the first inning got the Giants scoring started on a day when the pitching was superb all the way around.

LaMonte to the Landing ☄️ pic.twitter.com/7YHDHcH4nZ

I Love This Photo

The boys are back 🏆 pic.twitter.com/8etPRRKuUW

Let’s start the wrap by linking to Dr. Lefty’s wonderful reminiscence of the 2012 World Series Championship team and their phenomenal, unbelievable, wholly improbable season and postseason. It is a must read.

This was a good weekend for our boys. The three-game sweep of the lowly Pirates means the Giants are now at .500, as I noted earlier, and back in the Wild Card talk. Don’t look now but the Phillies are surging and the National League has legitimate Wild Card contenders in the Braves (The Mets own the NL East this year), the Phillies, the Brewers or Cardinals, and the Padres. Where are the Giants, you ask? Well, do you think they are a legitimate contender for the 2022 postseason, I ask you? Before we answer the question let’s remember that there are still 48 games to play for our favorite baseball team. It could happen. I will not write it won’t happen. It’s just that with four teams ahead of the Giants four three Wild Card spots, the odds are slim. It’s a shame in a way because Rodon and Webb are having standout seasons and would make a formidable 1-2 punch in October.

Let’s get back to the present: Joey Bart is back after a minor ankle injury. Evan Longoria is back, BCraw and BB9 are back too. This means the Giants are playing more or less at full strength. With LaMonte Wade Jr. catching fire now who knows? Maybe the Giants go on a 15-20 roll or something close enough to catapult them above the Phillies and the Brewers. I’ve seen weirder things happen.

But let’s be honest about one thing: I would argue that the most disappointing element of this Giants team this year has been the bullpen. Yes, the defense is historic proportions bad. Yes, the hitting has seen major cold streaks (I’m looking at you Joc.) But, the middle relief has just been abysmal. If the Giants have any hope of sniffing a postseason berth those hurlers will have to perform better.

But, hey, at least the Giants didn’t sign Fernando Tatis, Jr to the longest contract in Major League history. LOL

Ok, I finally did it. I am an old-school guy but I did break down and get an official Johnny Black Twitter account per GG’s pleading. You can follow me and I will be grateful. On my page you will see random tidbits about the Giants and my fandom. Happy Monday.