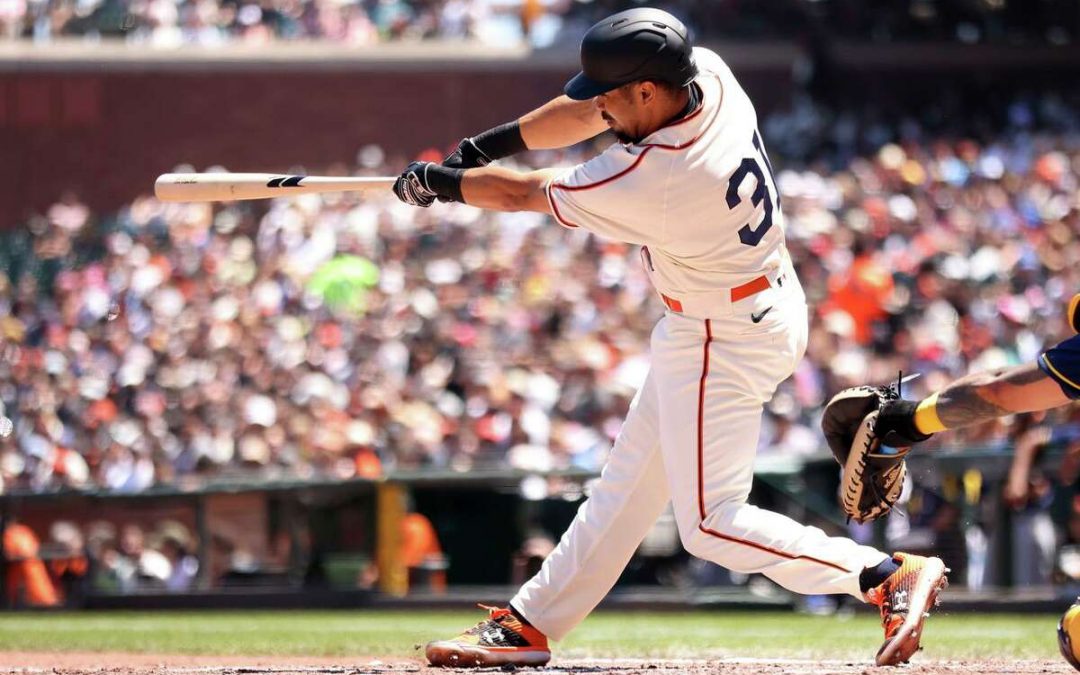 What a weekend ladies and gentlemen! This is the second week in a row I get to write about the Giants after two weekend wins. Plus, we have the first round of the MLB Draft to discuss and the Giants chose a very interesting two-player who may be the steal of the draft. Let’s start with yesterday’s 9-5 workman-like win over the Brewers to win the series, three games to one, and to head into the All Star Break with two straight series wins and five wins in seven games.

Thins were not looking so bright when Wily Adames of the Brewers, their best player, hit a 424 foot home run in the first off Logan Webb. But, the Giants would bounce right back with a run of their own in the bottom of the first when Wilmer Flores, Mr. Clutch, hit a sacrifice fly to tie the game and square things up for Logan Webb who found his rhythm and mojo starting with the top of the second. The Giants then exploded for a five-run bottom of the third after Brandon Belt singled in a run in the bottom of the second to give the Giants their 2-1 lead.

With two outs in the bottom of the third the Joc Pederson hit an RBI double off the bricks in right that drove in Wilmer Flores, who singled earlier in the inning, and advanced Evan Longoria to third. With two outs Joey Bart showed tremendous hustle and good speed in hitting an infield single that drove in a run and kept the inning alive. The hustle extended the inning for LaMonte Wade Jr. who would hit a three-run splash homer to give the Giants a 7-1 lead. The homer came off a curveball off Alexander, a righty.

Gabe Kapler played matchups aggressively in this game knowing that the Brewers were going with a bullpen pitching staff from inning one. In fact Kapler should be given credit for starting Wade and Joc both against a lefty starter that was only going to pitch an inning or two. It was a big offensive explosion that came at the perfect time.

In the bottom of the sixth inning Brandon Belt hit a two-run homer, his eighth of the year, giving the Giants a 9-1 lead. Belt went 2-4 as the PH and DH in the game and drove in three in the process. It was a great game by the Captain.

That ball was BELTed 🚀 pic.twitter.com/sWFGGQohiN

Kapler made the right line up moves in this game and his sluggers came through on a sunny day that saw a good crowd of around 35,000 fans cheer the home town boys to their 48th win of the season against 43 losses. The Giants are moving up in the standings and they need to because the Cardinals, the Phillies and the Padres along with the Braves are all fighting for three Wild Card spots with the Giants.

Logan Webb would pitch six innings in all and allow two runs in his outing. He was able to throw an effective fastball along with his sinker. In one at bat in particular, Mike Krukow astutely noted that Webb began threw a high fastball just above the letters to get the strike out against Rowdy Tellez. The rising fastball is a key pitch when precisely located and in concert with the offspeed pitches. Webb looked good on this day and the bullpen, despite allowing three runs was able to hold the lead in the ninth with Doval coming in to seal the win.

Today is African American Heritage Day at @OracleParkSF. The #SFGiants will wear the Sea Lions uniforms for today’s game in honor of the storied Negro Leagues team that played in San Francisco during the 1946 season. pic.twitter.com/PmpAZDIdty

Yesterday the Giants celebrated African American Heritage Day with a win and while wearing the San Francisco Sea Lions Jerseys of yore, 1946. You may note that the jerseys have a bear on them and there isn’t a sea lion to be seen. Well, that’s because the Sea Lions purchase the jerseys from a semi-pro team back in the day called the San Francisco Cubs. Interesting story.

Balk Offs, you either hate them or love them. Back in the day, in 2016, Santiago Casillas had a season from hell as the Giants closer. In one game in San Diego he fell off the rubber to balk in a run in the bottom of the tenth inning right before the All Star Break, and send the Giants reeling to a disappointing season.

Well, Saturday night the Giants won a game thanks to a balk off by the Brewers and their pitcher, Jandel Gustav who committed his with the bases loaded in the bottom of the eighth on a flinch that was basically textbook according to the umpires but that was not a balk according to the Brewers.

The 2-1 Giants win gave them momentum heading into the final game of the series on Sunday.

Dominic Leone got the save when he struck out Kolten Wong looking to end the game. Alex Cobb pitched perhaps his best game as a Giant, going 7 1/3 innings allowing only four hits and one run that was unearned. He struck out four and did not walk anyone. He was simply superb and a key part of the tight game as Brewers starter Eric Lauer was also excellent in his seven innings of work that saw him allow one run as well.

Darrin Ruf homered in the bottom of the sixth, a sharp drive to left, and the Giants escaped with a win against one of the teams they will fight against for a Wild Card spot.

Giants First and Second Round Draft Picks of 2022

With the 30th pick in the draft the Giants selected Reggie Crawford, a first baseman with power and a starting pitcher who hits triple digits with his fastball. The University of Connecticut star is coming off Tommy John surgery and this may explain why he was passed over by the other 29 teams. Scouts are high on him.

With the 30th pick in the @MLBDraft, the #SFGiants have selected 1B/LHP Reggie Crawford out of @UConnBSB pic.twitter.com/OGfvHSdQQO

The Giants chose Carson Whisenhunt, a lefty pitcher, for their second round pick. He too has a super high ceiling despite missing time due to a substance suspension for using an illegal substance. Many scouts think he should have gone in the first round.

With the 66th pick in the @MLBDraft, the #SFGiants have selected LHP Carson Whisenhunt out of @ECUBaseball pic.twitter.com/H1N6sY58wV

You can see the full list of first round draft picks here.

Just when I was ready to call the Giants sellers they start winning games on me. This turnaround may have saved their season but to be sure, one thing it showed me was the importance of a fourth solid starting pitcher in Alex Cobb and some pop in the line up when Wade is healthy and hitting. There are still many questions about the team’s infield defense, the fifth starter (though Junis is expected to take that role) and the health of players like Brandon Crawford and Evan Longoria, two guys for whom it can best be charitably said are having “off years.”

One more thing: The play of Joey Bart since his return to the Bigs has been big. I mean, really big. He is hitting. He is catching well. He is throwing runners out and he is fulfilling the role Bobby Evans and Brian Sabean envisioned when they drafted him. If he can be a serviceable MLB catcher the rest of the way the Giants will be in much better position to challenge for a postseason berth. Get this team into the postseason with Carlos Rodon and Logan Webb as your 1-2 punch and you just never know. If guys like Yaz and Wade continue to hit bombs and Bart performs well…

In short, it is hard to predict just how good or bad this team will be the rest of the way. The question is, should the Giants sell high on Rodon or look for another bullpen arm at the trade deadline?

As Dr. Lefty said: This is a really weird team.