Weekend Wrap: Giants Not Done YET! 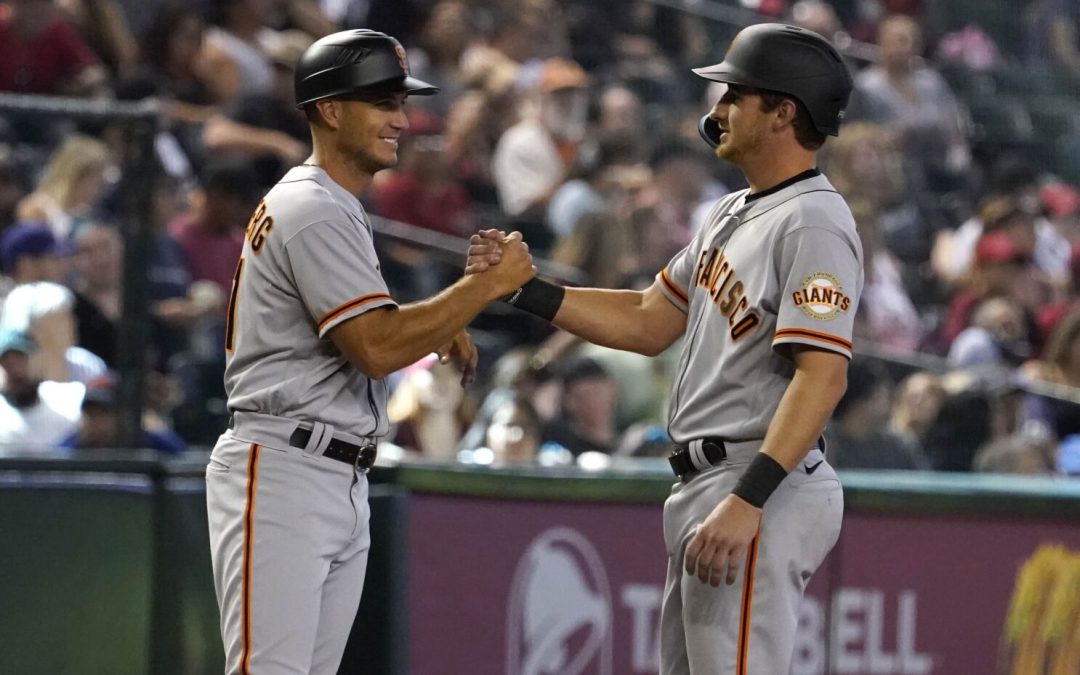 Last week was fun. The Giants won 6 of 7 to inch towards .500  with a record of 75-78 after this weekend, and bounce back from a rough three months. September will be the Giants first winning month since April. Way to go Boys. Ok, I could be a curmudgeon and say it’s too little too late but hell, I need some positives on this Sunday morning and the truth is the Giants are not yet mathematically eliminated from the Wild Card. This past weekend the Giants took two of three from the DBacks in Phoenix. It was an interesting series.

Arizona starting pitcher Drey Jameson is the real deal, folks. He has a great fastball, the nerve to throw off-speed pitches in unpredictable moments, and the command to paint black with all pitches. He would end up going 5 1/3 innings allowing five mostly harmless hits as he shutout the Giants.

The DBacks took the lead on an RBI double in the bottom of the fifth inning by Peyton Smith. The runner on first scored when LaMonte Wade Jr. made the slightest of bobbles when the sizzler one-hopped the wall and caromed hard to his left. Wade tried to grab the ball in mid-air with his barehand but he dropped it. That little drop gave the runner about three or four more steps which made the difference on the play and allowed the run to score. Crawford’s laserbeam relay would have had him if he gets the ball one or two seconds earlier. The ball was then correctly cut off to prevent the batter from reaching third on the play. It was an interesting play and it was the way the scoring got started.

That hit came off Jakob Junis who pitched 5 1/3 innings and allowed one run. He came in relief of Scott Alexander and Jaslin Garcia, two relievers who pitched one inning and one and two-thirds innings respectively. Again, I fail to see the logic of using relievers like this when the Giants could be auditioning starting pitchers for next season. I know, I get it that it forces the DBacks to play matchups or not, depending on their stance when you pitch a lefty or righty for one inning and switch but this strategy fails when you account for unnecessary stress on the bullpen and the failure to develop quality starting pitching. At any rate, Junis again was the hero of the pitching staff on this day and he deservedly got the win to go 5-6.

The Giants won the game because they finally broke through in the top of the eighth inning. With the bases jammed and Evan Longoria up with one out the third-baseman hit a screamer liner to single to left that majestically soared past the infield and landed just in front of the left fielder.

It scored two runs and gave the Giants a momentary 2-1 lead. That single came off former Giant Reyes Moronta. The Diamondbacks answered with a run in the bottom of the eighth inning to tie the game setting the stage for the top of the ninth inning where J. D. Davis sent a ball into the right center field seats and on vacation, to quote Jon Miller. That homer was a thing of beauty and gave the Giants the lead for good. That homer gave Davis his third career four-hit game. More please, Mr. J.D.

Mind if we join the pool party? ⚾️💦 pic.twitter.com/4ldaCNfpsp

Next year I want to see J. D. Davis get 300-400 at bats. The guy has a knack for big hits against both lefties and righties. If he can play a capable third he would be a good combo or backup for David Villar, who in my opinion, should be the Giants starter at the hot corner next year. It’s time for youth. It’s time for Longoria to retire.

The Diamondbacks and their Manager Torey Lovullo announced yesterday that Madison Bumgarner will not pitch for the remainder of the season.

Bumgarner finishes 2022 with a 7-15 record, a 4.88 ERA in 30 starts, and a 1.437 WHIP. The 33-year-old left-hander has two years remaining on a five-year, $85 million contract he signed in 2020 after 11 seasons with the Giants that included three World Series titles. The reason for the move is “”He’s perfectly healthy. We just have some younger arms that we want to get a look at.”

Age catches up even on the Mighty Bumgarner. Those of us who wanted him to stay with the Giants were only thinking emotionally. Farhan Zaidi knew what he was doing.

The Giants were Merrill Kelly’d again on Saturday. The powerful DBack starting pitcher won his third game of the season against the Giants. He now has an ERA of 1.53 in five starts against San Francisco. Ownage is Ownage. The final was 5-2 but this was Kelly’s game. Alex Cobb gave up a five-spot in the bottom of the fourth and that was your game. He pitched great otherwise. One bright spot was Yaz who had two hits and a homer. Vosler had a ribeye. That was that. The loss broke the Giants five-game winning streak.

As usual, Dr. Lefty had a great column again on Saturday. Her emphasis on finishing strong is superb. Her overview of the weirdness of Shelby Miller pitching for the Giants is funny. The Giants have nine games left in the season and need a record of 6-3 to finish at .500, the line of respectability in Major League Baseball. One wonders at the lost opportunity of not pitching more youngsters to start games but that’s water under the bridge. Strangely enough, the Giants are not yet eliminated from the postseason, thanks to their excellent week. It would take some serious weirdness for the Giants to sneak in. My guess is they would need to go 8-1 or 9-0 to finish the regular season and hope the Brewers lose eight or nine in a row. It could happen so it is not right to finish off the Giants script for 2022 just yet. Kudos to the team for fighting to the end and to Gabe (I never met a bullpen game I didn’t love) Kapler for keeping the team focused in September when all appeared lost.

The Giants finish the season this way: three at home against the Rockies, three against the DBacks at home and three in San Diego. Never say “never.”