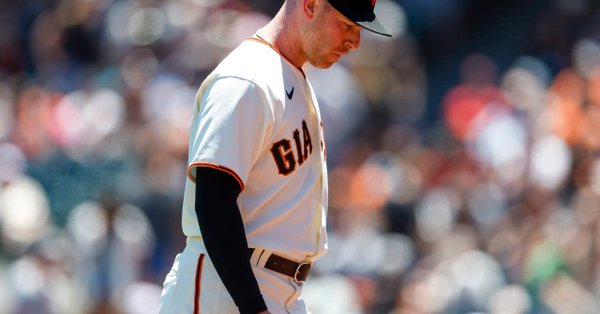 My first words this Monday should be Happy Independence Day everyone! Let’s celebrate our great nation and remember all the beautiful things about the home of the brave and the land of the free.

Now Back to baseball.

Greek Giant wrote in his White Sox-Giants Series Preview that the White Sox were underachieving this season with a record of 35-39 (before they swept the Giants). Well, yes. But, let me tell you something, the White Sox team I just saw outplayed the Giants in every facet of the game. They pitched mostly well. They can hit. They can run the bases and the can beat teams with power and speed. In yesterday’s debacle they had 17 hits, none of which left the park. You do not see that every day. After their three-game sweep of our boys, the White Sox look like a serious contender again. Our Giants?… well, let’s just say that this weekend qualifies as “off the rails” bad. The bottom out of the box awful. The season is falling apart. The Giants, with the sweep, are now 40-37 and closer to the last place Diamondbacks than the first place Dodgers. I see no help on the horizon either.

Things got so bad, so boring and so desperate during yesterday’s 13-4 loss to the White Sox that the CSNBA crew decided to spend a few minutes with the cameras on a poor, unsuspecting dad of about 58 eating popcorn. He was wearing an orange Giant creamsicke cap. He was trying to enjoy a day at the ballpark with his son, also on camera. It was during the third or fourth inning and both Krukow and Kuiper were perplexed at first then picked up the pace with their play-by-play and color commentary:

Kuip: He’s reaching the bottom of the box. He’s looking in deep, with a mix of regret and sadness.
Krukow: I hate that feeling.
Kuip: I love ballpark popcorn.
Krukow: Dad’s really into it.

This was during the ballgame with the Giants down 3-0 and showing no signs of fight or life and it was more interesting than the ball club on the field. It was thaaaat bad.

I see no reason to explore yesterday’s game or to analyze it in great detail. If you did not watch the game and you came to this post to get an idea of how bad it was just re-read my words above.

There was a bases-clearing double at some point, probably the fourth or fifth inning that made the game a blowout. On that hit, an opposite-field line drive smash by Sheets down the left field line, Joc Pederson failed to cleanly pick up the ball. He dropped it once then threw to the cutoff man, Giant shortstop Donovan Walton fielded the throw and then dropped it. Both drops meant the runner on first could score. There was no error charged but it showed how bad the Giants energy is. They cannot even make the routine catch and throw anymore. Their defense is, in general, a total disaster and an example of what happens when you build a team on scrap-heap pickups examining solely swing to miss rates, chase rates, barrel rates and forgetting that in baseball, everyone except the goddamn DH has to play the field and run the bases.

I think I am going to make today’s column about the major problems I see with the Giants.

This is my biggest issue with Farhan Zaidi’s approach to building the Giants Major League roster so far. He has found contributors at the plate. He and the Giants coaching staff have been able to squeeze gold from over-the-hill players or players on the downside of their careers for a season or two but the defense always suffers: Donnie Barrels, Wilmer Flores, Darrin Ruf, Joc Pederson, I could go on and on. In Zaidi’s offense-first analytics style the defense is an afterthought and you cannot win games in this philosophy in San Francisco. It might have worked for the magical 2021 season but the gig is up. I am tired of seeing innings extended, See problem 4, by bad defense. Zaidi’s acquisitions show a tendency to emphasize hitting over all other aspects of the game and display an American League bias and philosophy that says you need to out-score your opponents to win. But this is the National League. This is Willie Mays Field. Without a team that can make the plays from a ground-ball inducing pitching staff or cover the outfield then you have way too many long innings, too many extra base runners, too many runs not prevented. I am tired of seeing Logan Webb, Alex Cobb, Carlos Rodon and other pitchers pushed to throw another 10-12 pitches after a miscue, essentially losing an inning of their outings in the process.

The Giants have committed the unforgivable sin of being both bad and boring. They have no legitimate stars with the possible exception of Logan Webb. They have no young blood on the horizon flying in to save the day and electrify the fans in the future anywhere near AAA. The philosophy of platooning means hot hitters get pinch hit for or benched for inferior and/or inexperienced players, depending on matchups. It’s a disgrace. It should not happen.

If I am ownership the first thing I tell Zaidi i this: Draft a star and develop him. Then, when said star is on the team or about ready to join the club, trade or sign another star.

Which brings me to Problem 3. When your incapable of thinking beyond the pages of your matchups and analytics book in a baseball game or over the course of a season then you are going to lose fans. If a player does not play every day or if Joc Pederson, leading the Giants by a mile in every important hitting category, gets pinch hit for by Austin Slater in the fifth inning because of a pitching change, then it’s hard for a fan to stay invested in such player and such team. It’s a major mistake from the point of view of both playing baseball and building a fan base. I, and most sane people, would prefer to see Pederson stay in the game and face that new lefty. Even if he strikes out, his bat should stay in the game for later innings. He is the Giant MVP of 2022. In no world is it ok to pinch hit for him. I do not care what his history against a pitcher is. I do not care what the numbers say. Let him hit!

If your approach to managing and developing a starting rotation means your pitchers are lifted after five innings and say, 90 pitches then again, it’s hard to care about the starter. It’s hard to stay invested in the drama and evolution of his performance. If your approach to pitching means a journeyman reliever is warming up every inning and you use six and seven pitchers for a nine inning game, your fans are going to tune out. The game of baseball will suffer if the role and performance of the starting pitcher is diminished so much that you literally prefer to start a middle reliever every fifth day. It’s a joke!

I do not blame Zaidi and Kapler solely for this mess. The issue is the manipulation of pitching rosters and 26-man rosters. The exploitation and god awful joke of Injured list management has made a mockery of the art of pitching. Throw in the use of the DH that eliminates the need for pinch-hitters and double-switches and you have a stale form of baseball. This is a problem that goes deeper than the Giants, admittedly, but it is contributing to the degradation of the game.

The Giants are being run like a mid-market team. There was an interesting thread in the comments this past weekend about how spending money is no guarantee of winning and that is true. But the reality is unless you are in the top ten of payroll expenditure you have no chance of sniffing the World Series in today’s MLB game. The Rays of 2020 were an exception. Only the mismanagement of a critical pitching decision, see Problem 4, by their Manager prevented them from getting to game 7.

The Giants are 13th in payroll and declined to add any big names or big contracts in the offseason that might have made a big difference on this year’s team. My position, after this weekend, is that Zaidi actually made the right move because this Giants team is going nowhere with Belt, Crawford, Longoria all regressing and the AAAA players and castoffs pooping their pants at crucial moments on the field when it comes to making routine and semi-routine plays, both in the outfield and the infield though the infield by far is the biggest problem.

It’s beginning to look more and more that the smart move would be for Zaidi to trade his best bargaining chips like Rodon, Longoria, Pederson and maybe even Yaz before the deadline in return for young pitching prospects and at least one top right handed hitting prospect in AA or higher. There are other assets the Giants have in the bullpen for a contender and i think the return would be worth considering. If Zaidi makes the mistake of trading for a big name hitter at the deadline and sends away good prospects from the farm than he is more delusional than even the most diehard Giants fan.

Get ready for a rebuild Giants fans. Do not be fooled by the 107-win magical season. It was just a weird phenomenon, like a tornado or finding a $100 bill in. your laundry. It does not happen often and you cannot use it as the basis upon which to judge this year’s team.

Sorry to be such a downer but you are on Together We’re Giants because you care and you want an honest, and cogent, thoughtful analysis of your San Francisco Giants not the company line or some fan drunk on happy thoughts and hope.