Weekend Wrap: Giants Win Series in Pittsburgh But Get Suwinski’d In the Process 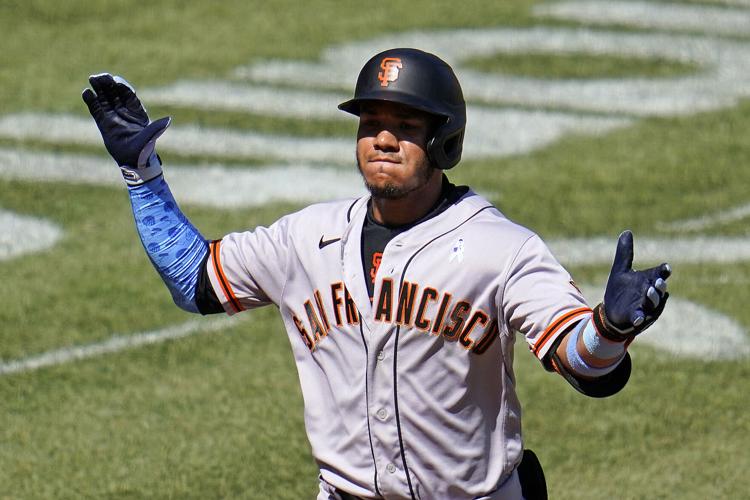 Suwinski’d: Verb, the phenomenon of giving up three homers in a game to a player who coming into the game had 8 career long balls.

Yesterday the Giants lost 4-3 when Jack Suwinski hit his third homer of the game in the bottom of the ninth inning right after the Giants tied it with dramatic homer by Thairo Estrada. The Suwinski homer came off Tyler Rogers in a gigantic mismatch that anyone could see at the moment. It came off Rogers’ third pitch of the inning and added to his ERA to make it a gaudy 5.34. 2022 has not been kind to Tyler. It could be the league has figured out a way to sink his submarine ball into the seats.

Why, oh WHY did the Giants pitch to Suwinski in this situation? There is ZERO excuse for it. NONE! The guy has two homers in his previous three at bats and looks like Babe Ruth at the plate. He’s got the swagger. He’s got the bat shake that screams: “just try to pitch to me”. His comfort and confidence were oozing into my living room like a bad David Cronenberg movie from the 1980s. It was so palpable I could smell it. If Suwinski had three more at bats (with the game going into extras let’s say) he would have hit three more homers and become the first Big Leaguer to hit six in a game. He was that good yesterday.

After he hit his second dinger I told myself the Giants would be nuts if they did gave him anything near the plate to hit. He should have been given the Barry Bonds treatment.

Some games require immediate adjustment to orthodoxy and analytics consulting. This was one of them. Unfortunately Gabe Kapler and his staff did not make the adjustment needed and the Giants paid for it.

To be fair, the Giants had a rough day at the plate again and were basically handcuffed the entire game after the first inning. In the top of the first the Giants scored two runs when Luis Gonalez reached base on an error, Yaz walked and Wilmer did too. Joc Pederson hit a two-run single and the rout was on…until it wasn’t. After Pederson’s hit there were two on, two runs in and nobody out. But Brandon Belt hit into a double play to kill the rally. Estrada would then reach base on an HBP but Tommy LaStella struck out and Pirates starting pitcher Mitch Keller lived to pitch another five innings.

This was critical to the game. The Giants had Keller on the ropes and let him escape the inning with only two runs allowed. Keller would then go on to pitch five shutout innings after the first, allowing only two more hits and no runs. He was excellent and the Giants had no answer until the Pirates bullpen came into the game. In all the Giants managed only four hits for the game and had many quiet at bats. They looked like they may have partied a bit too much the night before in the Strip District.

Here is Joc’s RBI single. It’s an excellent example of beating the shift:

For his part, Alex Cobb was good enough except for those inconvenient home runs he allowed to Park and Suwinski. The former Ray would pitch four innings in total and was mostly effective despite having significant issues with his command. There were many pitches where Giants catcher Austin Wynns set his target in one position and Cobb’s pitch would deviate by at least 12 inches. Cobb had his stuff but the layoff from a stint in the IL showed its effects. There’s no other way to say it: Cobb was rusty.

I just love first inning runs, especially homers. When Wilmer Flores yanked an outside corner fastball from Jose Quintana into the left field seats to start the scoring for the Giants in the top of the first in Saturday’s afternoon game it just felt right, like a cushy old chair or a nice cold Anchor Steam. It turns out it was the beginning of a seven-run barrage for the boys from San Francisco. The Giants would end up winning a see-saw game 7-5 after falling behind 4-2.

Darrin Ruf hit an RBI single that drove in Curt Casali from second base in the top of the third inning. Casali runs like Cecil Fielder if Fielder were carrying a piano and having a lunch break at the same time… It was hard to watch but he made it. Austin Slater smashed a laser beam home run over the center field wall off a quervy ball from Quintanta. Slater’s inside out approach generated a beautiful torque on a ball that never reached a cruising altitude of greater than 20 feet. It was impressive and an example of Slater’s power when he is right and he was sooo right on that at bat. The home run was the Giants answer after they fell behind 4-2. It made the game 4-3. It was a key hit in the game because the Pirates were not in quit mode on this beautiful Saturday afternoon.

The Giants tied the score on an RBI single drilled up the middle off the bat of Brandon Crawford in the top of the sixth inning. Later in the inning, with the bases jammed and one out Yaz would drive in a run on a sac fly to center. It gave the Giants a 5-4 lead. In the top of the seventh inning Luis Gonazlez doubled in a run with a hit to right center that split the gap. It came on a curveball and was a gorgeous example of swinging with your arms when fooled on the pitch. Even off balance Gonzalez can generate some pop with the lumber.

In the top of the ninth inning Brandon Crawford rifled a double down the right field line on a curveball. It was smoked and at 108 MPH, was the hardest hit ball of the game. It was hit so hard that the runner on second had to hustle home, so fast did the ball come off the wall and to the Pirate right fielder.

The Giants hitting attack deserves kudos for scoring consistently and never letting up in the game. On the day the Giants had ten hits and walked more times, nine, than they struck out, eight.

Alex Wood would get the win despite a shaky outing that saw him give up four runs on six hits in 5 1/3 innings. Brebbia, Rogers, Mcgee, Leone and Doval would pitch the remaining three and two thirds innings with only Leone allowing a run. Doval earned his 11th save of the season pitching a clean inning and recording two strikeouts in the process.

The loss put a damper on a successful weekend because the Giants won Friday and Saturday’s game to take the series in Pittsburgh for the first time in six seasons. With yesterday’s loss the Giants fall to 37-28 and are now 3 games behind the Dodgers. The Padres and Dodgers are duking it out for first while suffering serious injuries to key players. So this has been a good week for the Giants who made up a couple games in the standings.

All in all it has been a good week for the Giants. I recommend Dr. Lefty’s column from Saturday. It’s got a terrific breakdown of how good the pitching has been so far in June.

What’s Up With Evan Longoria?

So we need to talk about Evan Longoria. The veteran third baseman has had a very weird Giants career, cursed with many injuries, nearly none of which have been his fault. He has suffered broken bones from a HBP in Miami. He collided with Brandon Crawford trying to field a ball. He has suffered setbacks from the recoveries and he has played very limited baseball since returning from the IL this year. It appears the Giants are either babying him, so he can recover 100% or they are relegating him to a platoon role. Yesterday, for example, he did not start but recored a pinch-hitting appearance in which he grounded into a double play that saw Brandon Crawford get called out for runner’s interference. He is now batting .207 and sometimes appears a bit foggy in his at bats. Could Longoria be deadline trade bait?