Weekend Wrap: Is It Over for the Giants? 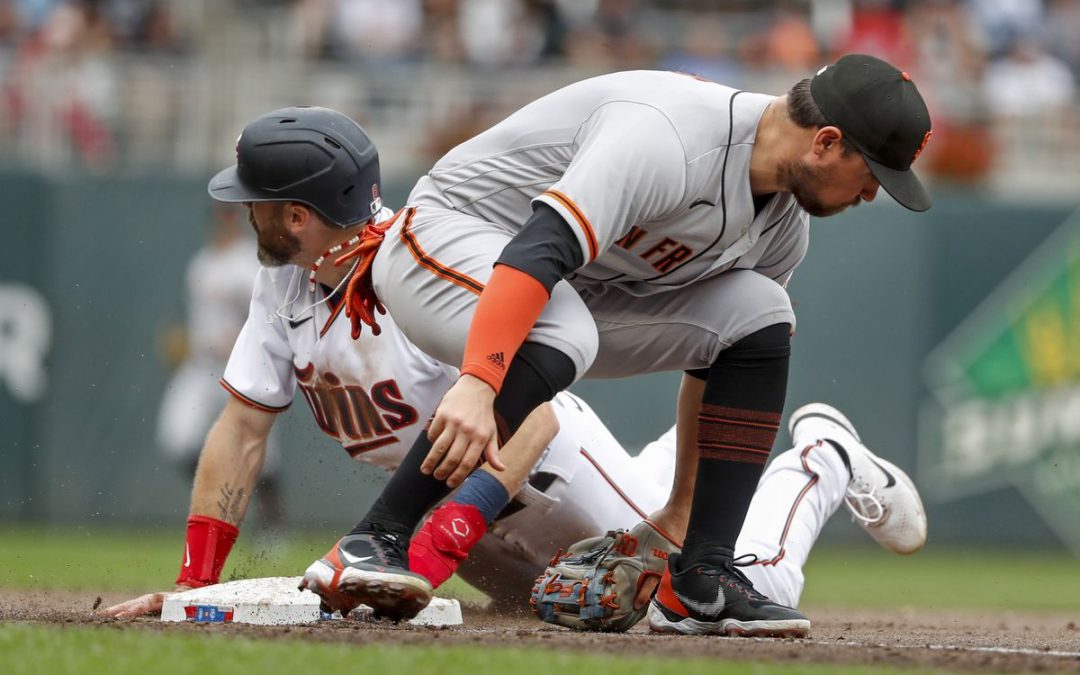 The nice thing about delaying my Weekend Wrap is that I do not have to go into detail about the crappy games the Giants played this weekend. So, I will give you the official “Johnny Black phones it in analysis©.

Oh man. So I go away for a week and this is what happens? The Giants stink again?

The Giants just got swept unceremoniously in Minneapolis by a Twins team that had been reeling. The Giants split two games to a terrible Detroit team and lost two of three in Denver to a bad Rockies team. Let me see… Let’s do the math… (Types numbers into official Johnny Black calculator. Adds a few ratios, cogents, cosigns and signs, sighs and more sighs..) The sum total: The Giants are sinking like a stone in the NL West.  That’s a 2-6 road trip if you are keeping score at home. That ain’t good, boys and girls.

One of the stories of the road trip is the lack of runs scored. Have a look at the total runs on a per game basis, courtesy of Alex Pavlovic:

With yesterday’s loss the Giants are now 61-65, two games ahead of the Diamondbacks for fourth place in the division. I won’t get into the Wild Card standings. Because… Please… does anyone really think this team has a legitimate shot at a postseason berth?

(Clutch Up raises hand). Ok, Clutch, I admire your fortitude and loyalty.

The Giants got waxed, 8-3. That’s all you need to know. They had leads of 1-0, 2-1, and even tied the game at 3-3 in the top of the fifth inning. But in the bottom of the fifth inning the Twins scored five and that was the game. Jakob Junis gave up six runs and nine hits in 4 1/3 innings and suddenly the Giants pitching made the Twins look like their loaded with Kent Hrbek, Kirby Puckett, and Harmon Killebrew. Bummer of a game, boys.

At least LaMonte Wade Jr. made a nice play.

Here is the play by play sequence for the bottom of the ninth in Saturday’s 3-2 loss in ten innings. Read no further thank “Kepler Walked.” That’s all you need to know. Doval takes the hill after the Giants get an insurance run in the top of the ninth. He walks the leadoff batter and it gets worse from there. For all the hand-wringing about Dominic Leone, that bottom of the ninth is the key to this loss in Johnny Black’s book.

For the second straight game in Minneapolis, the Giants managed a meagre sum of four hits in the game. Three of those knocks came in the top of the ninth! That they scored two runs should be considered something of a miracle, considering. The fact is, this is not a great Twins pitching staff but on Friday and Saturday the Giants made them like like the 1970 Orioles.

When the Giants are not homering, they’re not winning many ballgames, ladies and gents.

Alex Cobb went five innings and shut out the Twins with seven strikeouts. However he needed ninety-nine pitches to get those five zeroes on the board. This meant the bullpen was needed and it did its job until the ninth and tenth innings. I would rather not get into the tenth inning.

Oh… and if Austin Slater does not get picked off in the top of the fifth inning the Giants get another run on Joey Bart’s double. It’s that kind of season for the Giants.

In a good example of piggybacking on the Giants legacy the Mets retired Willie Mays’ number this weekend.

This is a good play from a Flying Squirrel:

Play of the year! https://t.co/4PqXbEiQR3

Baggarly just wrote  a great story about Vaun Brown. I love this. Expect to see him in a Giants uni next year.

Vaun Brown didn’t hit a homer in high school. He was a non-prospect when the pandemic wiped out his senior year of college. But determination and a series of cosmic connections led him to the Giants. And now he’s the best out-of-nowhere story in the game. https://t.co/ndZWirjzjL

I’m trying here, ladies and gents. I mean, really, I am trying to make this post interesting and relevant but what else is there to say about the 2022 Giants squad that has not already been said? Let’s start with Farhan Zaidi. This is his team, not Gabe Kaplers. Zaidi enters next year in the final season of his contract. Does he deserve an extension? Well,,, There’s 2021 alright but 2019 and 2020 were not so hit, quite frankly. 2022 is not looking good either. There’s an old saying where I come from in Mendocino: “Never give the Chicken his scrambled eggs before the bacon.”

Translation: You don’t reward someone on hope when what you have seen is not worthy of reward. I don’t buy and never bought that lame duck business. Either you know what you have in a GM and VP after four seasons or there is something wrong with your evaluation and fealty/lack thereof. The Giants will have an interesting offseason from ownership’s perspective. I don’t lay 2022 on Kapler, though I am not fully aligned with his analytics, platoonish philosophy of baseball. Make no mistake, Zaidi calls the shots, from how to platoon players to building a roster and developing and drafting, Right now the verdict is looking bleak.

About that 2020 pandemic excuse I’ve got one thing to say: “Plllleeeeeeze”. Every other team had a pandemic too. It’s not affecting the Dodger farm system. The Cardinals are thriving and bringing up young bucks by the bucket-ful. No

If the Giants don’t get to the postseason this year than it’s time for ownership to re-think everything and NOT extend Zaidi. If, by some great turn of fortune the Giants have a fine 2023 and get to, let’s say the NLCS, and the farm produces players that contribute to that run, then, by all means, extend away. But if not, then NO.

Playing out 2022 means let’s see what we have down in the farm. I am tired of AAAA players. I am tired of Mariners re-treads. Let’s see some moves by ownership that saw “We want to win.” Sign Carlos Rodon and get me a Trea Turner in free agency and then I am on board the Zaidi train for the ride. Let’s see how urgent FZ gets without an extension. Does he go big or go home? Or, does he stay the conservative risk-averse course?