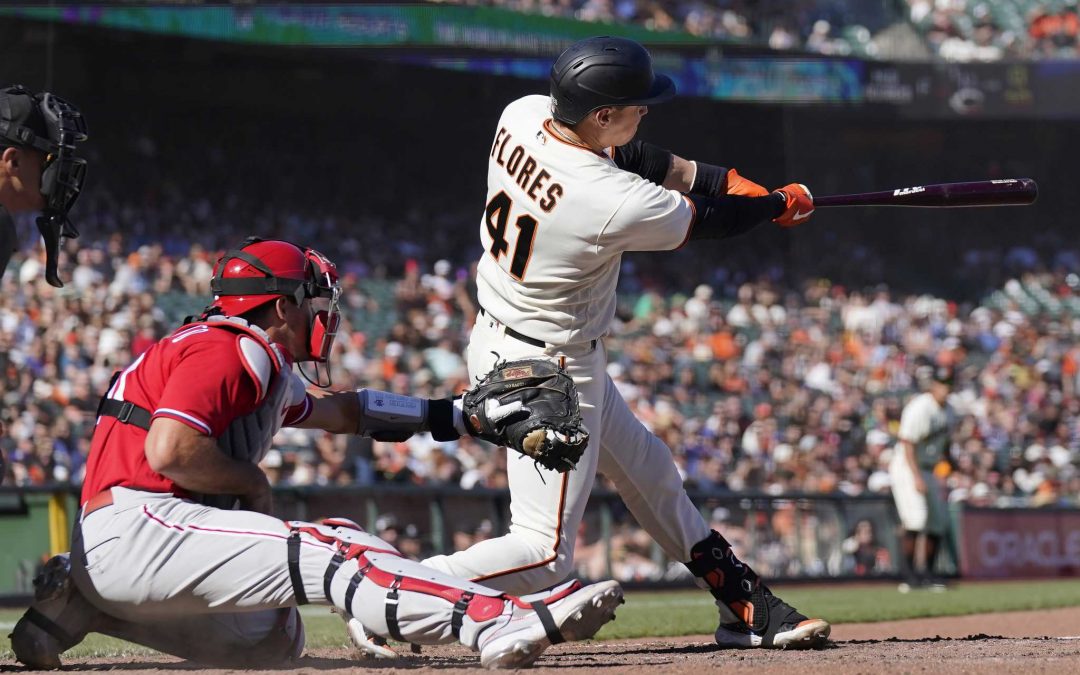 I just cannot figure out this Giants team. Just when I was ready to make the next season and the Minor Leagues the focus of today’s Weekend Wrap the Giants trash my plans with an impressive sweep of a strong Philadelphia Phillies ball club.

Who’d a thunk it? I did not see this coming. Did you?

So this is what a good team looks like: even when your pen blows a three-run lead in the eighth inning (looking at you Brebbia) one of your slugs slugs a two-run, game-ending home run in the bottom of the ninth. Blown lead? No problemo.

Wilmer “Flower Power” Flores hit is 17th homer in grand fashion by absolutely obliterating a curveball. The home run was hit faster than the television cameras and required a few looks from above the stadium to be captures. That’s how hard it was hit. The top spin liner sailed just over the left field wall and inside the foul pole to give the Giants a three-game sweep of a Philadelphia Phillies team that was probably licking its chops when it came to town on Friday.

From the Journal of the Wil

Nope. Not this time Philly Phans.

The Giants were ready. Yesterday’s story begins with Carlos Rodon who pitches six marvelous shutout innings recording ten strikeouts and allowing only five hits with two walks. His genius was evident throughout, particularly in the top of the fifth inning with he escaped from a bases-loaded jam with no damage thanks to a strikeout. Rodon would have won his 13th game of the year were it not for John Brebbia’s three-run eighth inning but since the Giants came back to win we will not dwell on poor John.

With his outing Rodon reached 200 strikeouts in a season for the first time. He finished with 201 and there is plenty of baseball left to play. He also recorded his ninth double digit strikeout game of the year, tying Jason Schmidt and Timmy for the club record. Rodon will break it in his next start. Print it.

Never tell him the odds.

It’s nice to see Gabe Kapler offer a pleasant quote after a game for a change.

The winning rally went like this: Bryce Johnson, who recorded his BIg League Knock and ribeye earlier in the game, drew a leadoff walk in the Giants ninth. David Robertson struck out the next two Giants before Wilmer’s heroics.

The Phils answered with Realmuto’s three-run dinger in the eighth. This is just too good a hitting attack to quash for an entire weekend. But Camilo Doval earned the win in the ninth inning with a scoreless frame and the crowd of 41,000 plus went home happy, or at least most of them anyway because as always there was a decent contingent of Phillies fans. They, along with the Cubs, Mets and Bums always bring along a noisy group of followers that contaminate the peace and tranquility of the hallowed grounds Greek Giant calls “Willie Mays Field.” It is nice to send them home disappointed.

After a mid-summer cold-streak hibernation from hitting Joc Pederson is back on fire. He drove in three runs including a bases-loaded walk to break a tie in the sixth inning.That walk came after Brad Hand had Pederson in an 0-2 count. The Phillies had trouble finding the zone again one day after issuing ten walks on Friday.

Pederson’s walk and run made the game 5-4 and gave the Giants their second win of the weekend. Earlier in the game Joc hit a two-run single.  On Friday he homered and drove in five runs. Nice going.

Camilo Doval pitched a rare four-out save that was made possible only because the Giants had lost so many games and had won by a big margin the night before. So that meant Camilo was well-rested. That’s one thing about losing streaks: You never have to worry about over-working your closer.

Alex Wood on the Shelf

Something is up with Alex Wood. The results have been terrible in his past four or five starts. It turns out he has a shoulder issue which could be serious.

He was placed on the 15-day injured list Saturday. ESPN reports the following:

Wood’s ailment is an impingement in his throwing shoulder, which has been acknowledged as an issue for weeks. Kapler said the ballclub’s hierarchy will use the next five to seven days to determine whether starting Wood again this season is sensible. “Alex knows his body very well,” Kapler told reporters. “He knows when it’s time to really hit the gas pedal and to push himself, and I think he had a good feel for this thing all the way through. Right now, I don’t think he can push through for this next start. It doesn’t mean that he won’t be ready at some point this season to continue to pitch for us.”

I think it might be time to let Alex walk off into the offseason sunset. Don’t let him pitch anymore. Make sure the shoulder heals and does not need surgery. See what some young arms from down on the farm can do. That’s what Johnny Black says.

The Giants are now 64 -68, a measly 27.5 games behind the Dodgers. It turns out the Giants did not like the looks of fourth place after a brief two-day stay there. Ok, I can buy that. The question is what does the last month of the season mean for this team? What are its objectives? How should management approach the final 30 games?

There is a lot of Internet chatter about the 2023 club looking much like the 2022 club. I don’t buy it, necessarily. If it is true get ready for another ninety-loss season, ladies and gents. This will be the most important off-season of Farhan Zaidi’s reign. He will live or die as Giant Head Kahuna based on the results of the 2023 club, the moves this offseason, and the progression of the farm system next year, including the draft. Right now if we take an objective look at the four Zaidi drafts the results are less than mind-blowing and we are seeing many players taken below the Giants who are already making strides as impact players in The Show.

The way I see it, this season is more than about a disappointing won-loss record. It’s about the health and well-being of the Giants brand and franchise.

Are the fans excited or optimistic about the future?

Are their young stars in AAA and AA in the making? Mmmmaybe, though there have been injuries and regressions.

Have the Dodgers and Padres surpassed the Giants in big league talent? You bet.

What will happen with Brandon Belt? Will he retire or elect for knee surgery and attempt a comeback?

What will Zaidi do with Rodon? Will he be re-signed to a longer term contract or will the lefty ace elect to opt out and take the money and run to the Yankees or Red Sox?

There are so many questions facing this team and this franchise that I think this offseason will be full of story lines and dramatic twists and turns enough to fill an Avengers movie.