Winning Ugly in the Desert 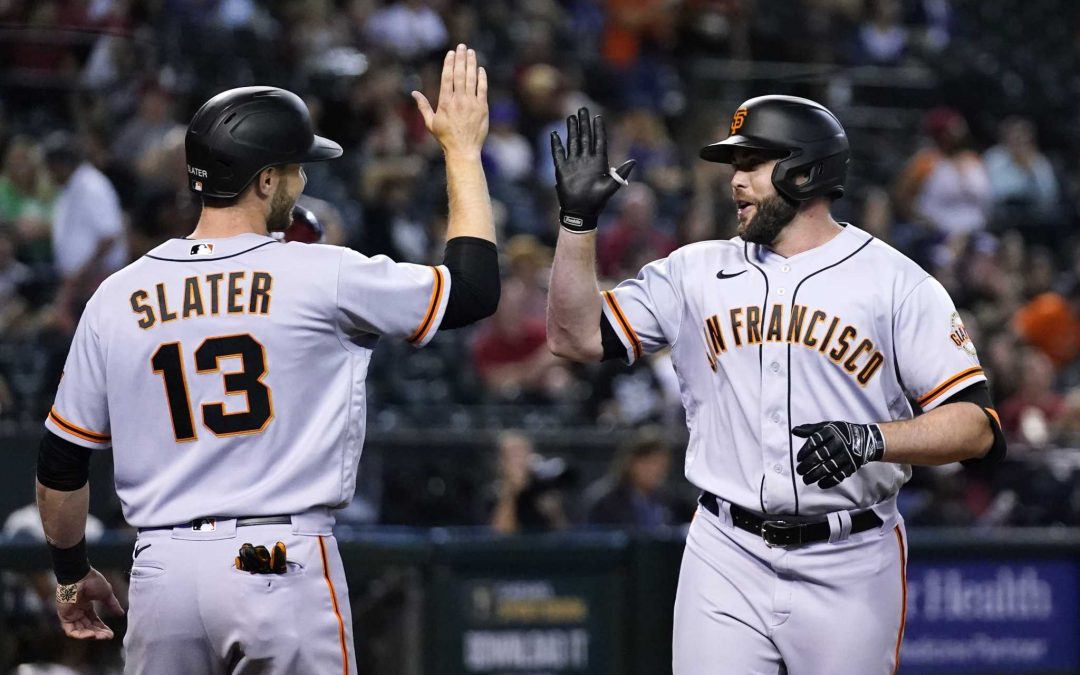 A win is a win is a win… Last night in Phoenix the Giants broke their five game losing streak with a victory that could be best described as, well…. ugly.

The 7-5 win was one of the more dramatic games this year with the Giants coming from behind after trailing 4-0 early. There were more sloppy plays and non-plays in the infield. There was a very rough Camilo Doval outing and there was Sam Long on the bump to close out the game. Yes, Sam Long.

But I’m getting ahead of myself.

The Giants used pinch hit appearances by Austin Slater and Darrin Ruf to great effect last night as Gabe Kapler pulled all the right levers and pushed all the right Analytics buttons.

Let’s start with the two-run eighth inning and the three-run ninth. The Giants displayed their grit in this game and started with bloops and blasts. Darrin Ruf hit a rocket of a two-run home run in the 8th frame as a pinch hitter after Austin Slater reached on a pinch hit bunt single. Ruff’s blast was a thing of beauty and a reminder of the bat speed and pop the big righty is capable of when he is on. The Ruf blast was the first pinch hit homer for the Giants this season after they lead the universe last. year.

The homer came off Diamondbacks reliever Mantiply and it silenced the crowd at Randy Johnson Park in a hurry. It would tie the game at four runs apiece.

In the top of the ninth inning the Giants rallied to take the lead when Yaz lead off by getting hit by a pitch. Wilmer Flores then singled to center and suddenly we’re in business. Brandon Crawford beat out a potential double play ball. It was close and it was a key play in the inning and the game. Austin Slater then laced a double down the right field line in classic Austin Slater style.

It scored two runs to give the San Francisco Giants Baseball Club Limited the lead for the first time in the game. Austin Wynns then added an insurance run with a sacrifice fly to make it 7-4 but the Arizona club was not finished.

Joey Bart Is Back

Joey Bart, yes, that Joey Bart, hit what looked like a home run to get the Giants on the baord in the top of the fifth. Upon umpire review the hit was ruled a double as a fan reached over the fence in left center to catch the ball before it left the park. Nevertheless it was big as it scored a run to get the Giants scoring started. No doubt it was one of Bart’s bigger hits of this season.

I dig Camilo Doval. I really do but last night’s outing that saw him walk three batters and allow a run only to be yanked in favor of Sam Long shows just how raw the big hurler is. It seems he has issues with command on his fastball and sometimes favors the slider a bit much. Doval is Exhibit A in the difference between a hurler and a pitcher. Right now he is closer to the former than the latter. I’m hoping the Giants season him and give him the right mental approach to get to master the art of pitching soon since his arm is something else. I think a change up is in order for Camilo.

Speaking of Sam Long, yes, he was called upon to close out the game over Jake McGee and quite frankly, it was the right call given McGee’s struggles this. year. The Giants needed this win in a bad way and there was no room to mess around. Long would strike out Luplow to end the game on a superb curve ball.

In fact, Gabe Kapler was a bit defensive when asked about the choice of Sam Long over McGee. It goes to show you the Giants Manager is a human too and it shows how much he cares about his team.

Well, once again an infielder failed to make a play that needs to be made when Tommy LaStella whiffed on a short hop from a grounder to his left. It resulted in a run. The Doval outing was just..well, you get the idea. The Giants got a decent but not sterling outing from Alex Cobb who again was victimized by the defense. In all the Giants scored seven runs only five hits so their bats are not exactly heating up.