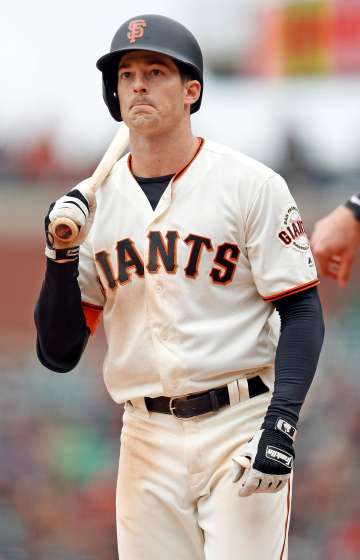 Mike Yastrzemski would have come up as the tying run if home plate umpire Rob Drake hadn’t taken the bat out of Austin Slater’s hand and ended the Giants’ season.

Last Sunday, just a few hours before the final game of the 2020 regular season, I posted a column called “Keep Hope Alive.” I really thought the Giants were going to pull it off, have a winning (or at least even .500) record, and sneak into the playoffs. Six days later, I’m still both surprised and pleased that they were relevant until the very last pitch (%^#@& Rob Drake) and deeply disappointed that they fell short.

And in a nutshell, that expresses how I feel about the Giants right now–their immediate past and future: surprised, pleased–and disappointed. Let’s talk a bit about what it all means.

The Giants finished 29-31 in their 60-game season. Two games under .500, and if just a couple more things had gone right…but let’s put that into perspective. 29-31 is a .483 winning percentage, and in a 162-game season, that’s a record of 78-84, or one more win than last year’s 77-85 record. Considered that way, it was a slight but not huge improvement. It also seems likely that in a longer season, the team would have fallen back in W-L record and in the standings. The pitching (more on this later) was leaking oil at 60 games.

The Giants did finish with a +2 run differential and were the only team in the majors to have a positive run differential and miss the playoffs. (I digress, but I believe the Giants would have put up a better fight than the unworthy, backed-into-the-playoffs Milwaukee Brewers, who never spent a second over .500 this season but somehow stole the Giants’ postseason spot. In fact, four NL Central teams made the playoffs and none made it out of the first round, going a combined 1-8 against their opponents. This shows how a weak division ended up hosing the Giants. Yeah, I’m a little bitter about this.)

This is the area where I’m surprised and pleased. The 2019 Giants were a weak offensive team, and that’s putting it politely: They were 27th in MLB in batting average and 28th in OPS and runs scored. That’s–how shall I put this?–BAD.

So then Big Boss Farhan Zaidi (his actual title is too long and I get bored typing it out) went out after last season and signed a bunch of free agents to fix the offense, and…wait, what? He only signed one-dimensional journeyman Wilmer Flores and 87-year-old Hunter Pence–and then DFA’d Pence before August was over? Oh, and I guess he signed Pablo Sandoval (also DFA’d before the season ended) and Darin Ruf to minor league deals, but that’s not much of a fix, when you think about how far they had to go.

Instead, the Giants doubled down on the talent they had–breakout 2019 rookie Mike Yastrzemski, talented-but-fragile spark plug Alex Dickerson, career minor leaguer Donovan Solano, expensive-but-underperforming veterans Brandon Belt, Brandon Crawford, and Evan Longoria, and rookie Mauricio Dubon, who was also successfully converted from a middle infielder to a surprisingly good center fielder. And darned if they didn’t get more–a lot more–out of what they already had, and Flores contributed too, leading the team in home runs with 12.

How much better was the Giants’ offense? They ended up fifth in the majors in batting average, sixth in OPS, and eighth in runs scored. That is a huge improvement–especially when you remember that it was almost exactly the same team as last year except without Buster Posey. On an individual level, Belt became the first Giants since Barry Bonds to finish with over a 1.000 OPS (minimum 100 at-bats), three others had OPS over .900, and three more had OPS over .800. Brandon Crawford had the best year of his career at the plate, even better than when he won a Silver Slugger in 2015.

As noted in a postseason article by Andrew Baggarly, credit has to go to the trio of new young hitting coaches (Donnie Ecker, Justin Viele, and Dustin Lind) and the manager who hired them (Gabe Kapler). Credit also has to go to the players, especially the pricey veterans, for buying in and trying new things. You know who else was impressed? Buster Posey, watching from his couch. After the season ended, Kapler called Posey for his thoughts, and reported this (also from Baggarly’s article):

“He had high praise particularly for our hitting coaches and was impressed by our ability to score runs and string big innings together, and specifically called out the work Donnie, Justin and Dustin did in the cage going back to spring training. I know he’s excited to work with those guys going forward.”

Posey has seen a lot of offensive ineptitude and some pretty ineffective hitting coaches in his career, so this is a good report.

This is where I’m both disappointed about the season that just ended and concerned for the future. First of all, it’s obviously a bummer that Johnny Cueto had the worst season of his career and that Jeff Samardzija, who had a solid 2019 season, wasn’t healthy enough to contribute at all. It’s also a bummer that Drew Smyly, who was extremely good in a small sample, missed much of the season with a flukey finger injury. None of that is Zaidi’s fault or Kapler’s, and the addition of free agent Kevin Gausman turned out extremely well–Gausman was far and away the most impressive member of the pitching staff.

I can’t really fault Zaidi or Kapler about the rotation–a bunch of things just didn’t go well, including the final crash-and-burn of 2018 sensation Dereck Rodriguez–but I do fault both of them for a poorly constructed and poorly managed/coached bullpen that cost them a chance at a winning record and a playoff spot. That is not an exaggeration. The offense was clearly good enough; the rotation, while not stellar, was strong enough with the offensive support to win games. It was an under-talented bullpen and a manager who has already proven (in Philadelphia) that he is not adept at managing a pitching staff that caused the Giants to fall short this year.

There were some bright spots in the bullpen, including rookies Caleb Baragar and Sam Selman and waiver-wire pickup Jarlin Garcia. But overall, they walked too many hitters, they didn’t strike out enough hitters, and they couldn’t put hitters away. Paired with a weak defense, this turned disastrous just enough times to keep the Giants out of the playoffs.

Zaidi did bolster the rotation by signing Gausman, Smyly, and Tyler Anderson. But his only offseason addition to the 2020 bullpen was Jarlin Garcia, who was a waiver-wire pickup from the Marlins. Zaidi’s lack of attention to the bullpen along with Kapler’s inability to make good decisions at key moments was the Achilles heel of the 2020 Giants. As a fan, I’m frustrated about that.

The good news is that nearly all of the hitters will be back next year. The only free agent is Darin Ruf. I assume that Austin Slater and Solano will be tendered contracts (both are arbitration-eligible). And a well-rested Buster Posey should be raring to go. While Zaidi mentioned in his end-of-season press conference that he’d like another left-handed bat and perhaps a backup catcher to allow Joey Bart more time in the minors next year, he doesn’t really have much work to do on the offensive side.

Not so with the pitching staff. Samardzija’s five-year deal with the Giants has ended. I’m sure the Giants hope that Cueto’s sixth year of his Giants tenure will be better than his fifth, and perhaps having a steady presence in Posey to work with will help Cueto to bounce back. But the two best starters of 2020, Gausman and Smyly, are both free agents. Both have expressed an interest in returning, and the Giants have expressed interest in bringing them back. But that’s no sure thing until it is, and Gausman in particular has surely boosted his free agent stock with an excellent contract season. At this point, next year’s rotation consists of a fading Cueto, a shaky youngster (Logan Webb) who possibly could use more AAA seasoning, and an inconsistent Tyler Anderson. Nor are there any immediate reinforcements in the upper minors. Tyler Beede likely wouldn’t be available until close to midseason, and he’s still as much of an unproven entity as Webb is.

As for the bullpen, we can hope for a healthy and effective return from Reyes Moronta, but you never know when a pitcher’s had a serious shoulder injury. Tony Watson will likely be elsewhere. Zaidi said that he’d like to sign one or two veteran relievers but not necessarily a closer. The most urgent need is clearly on the right side, as the best relievers of 2020 (Watson, J. Garcia, Selman, Baragar) are all left-handed.

I think we can all agree that we were grateful to have any baseball at all this year, and the Giants being far more entertaining and competitive than they have been in recent years was a very happy surprise. Whether the weak spots can be shored up and the strengths are sustainable remains to be seen. It’s hard to predict much of anything based on 60 games against just nine other teams. It’s also hard to predict how free agency will progress when no one knows what budgets and revenue will look like for 2021.

If nothing else, the offseason should be more interesting than the last two have been. I’m curious to see how Zaidi and Kapler build on their successes and learn from their mistakes. Stay tuned. Lefty out.