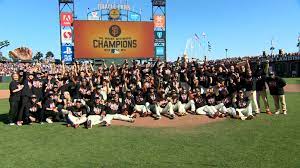 This was a column I hoped I wouldn’t be writing until November, but oh, well, here we are. Greek Giant did a masterful job of describing the end to the Giants’ magical run of 2021 and reviewing what went well and what didn’t in their NLDS series with the D*dgers.

So it’s left to me today to do a bit of retrospective musing about the season just past and some speculating about what may lie ahead in the near future.

OK…almost everything went well. When you set a franchise record with 107 wins, break your franchise home run record, break the major league record for pinch-hit home runs, and win the NL West after eight years of dominance by that other team…well, a lot of things have gone well. Let’s start with the obvious: Gabe Kapler and his staff did a masterful job of coaching, game planning, and game management, and if Kapler doesn’t win NL Manager of the Year, they should get rid of the award. Many players had great years as well, but here were the particular standouts:

Not much, but a trio of 2019-2020 heroes–Donovan Solano, Alex Dickerson, and Mike Yastrzemski–had disappointing down years, and it would be surprising if either Solano or Dickerson is back next year. Free agent pitchers Matt Wisler, Aaron Sanchez, and John Brebbia didn’t work out well, either. You could quibble about the Giants losing their season series to the Pirates (!!!), but since they finished with the best record in MLB anyway, I guess we’ll let that one go.

If there’s any bright spot about the Giants’ early exit from the postseason, it’s that the front office has extra time to prepare for what will be a busy and crucial offseason. The Giants have big decisions to make about their free agents, about next year’s rotation, and about their (many) players who are eligible for arbitration. We’ll take those one at a time.

The first number to focus on is $100 million. That’s the difference between the Giants’ 2021 payroll ($149 million) and their commitments for 2022 ($49 million). In addition, the Giants’ 2021 payroll was well under the luxury tax line (which is over $200 mil this year). We don’t know what that tax line will look like in the new CBA yet, but suffice it to say that the Giants have both cap room from this year and money clearing off the books for next year. They can spend if they want to. And they’ll need to.

This is where things get tricky. Another thing you could argue didn’t go well for the Giants this year is that they basically have no real rotation options in AAA ready for the 2022 season. Tyler Beede? Sammy Long? Sean Hjelle? Well, you never know, but none of them did well enough this year to be counted on for the Opening Day roster. Could one or more of them turn things around and provide some depth later in the season? Sure–maybe.

Anyway, the only starting pitcher sure to be back next year is Logan Webb, who conveniently also happens to be their best pitcher. Cueto is not likely to be back. Will the Giants put all the eggs into the basket of signing back the guys they had this year (Gausman, DeSclafani, and Wood), or will they also go after other big-name free agent pitchers, who at this moment include Max Scherzer, Noah Syndergaard, Marcus Stroman, Justin Verlander, Robbie Ray, Zack Greinke, and yes, Clayton Kershaw? It’s a huge list. My guess is that the Giants will go hard after Gausman, for whom I’ll admit I have a soft spot. He’s fun to watch and seems like a great team guy who loves being a Giant. But I also guess they’ll take some of the freed-up money they’ll have and go after at least one other big name on the list.

This is also a huge list this year. In alphabetical order: Tyler Beede, John Brebbia, Curt Casali, Alex Dickerson, Steven Duggar, Jarlin Garcia, Austin Slater, and Mike Yastrzemski. (If you look at the Cot’s Contracts list, you’ll also see Reyes Moronta and Mike Tauchman, but they have both already elected free agency.) That’s a long list that includes players who were key components of this year’s team but others who were less so. People thinking the Giants are going to DFA or non-tender Mike Yastrzemski need to get a grip. I don’t care what his batting average was or that he went 0-for-the-NLDS. He was second on the team in home runs and RBIs, played Gold Glove caliber defense in the outfield, and he’s not going to cost that much as a first-year arb player. Yaz will be back.

The other interesting name there is Casali, and that brings us to the big Joey Bart question. Bart was the #2 pick in the 2018 draft. The Giants gave him the biggest bonus since Buster Posey in 2008. He will be 25 in December. Bart is a valuable asset, and you can’t keep him in AAA forever. Bart hit .294 with a .831 OPS and 10 homers in 276 plate appearances for Sacramento this year. That doesn’t scream “instant superstar,” but it also suggests he’s as ready for the majors as he’s going to be. So…do the Giants bring Casali back to be Buster’s backup next year–a role at which he absolutely excelled–or do they promote Bart and let Buster work with him next year? If they do decide to keep going with what worked so well this year (Posey/Casali), is Bart trade bait? This may be the most interesting off-season question after the free agents listed above. A lesser question is what they’ll do with Tyler Beede, another (so-far disappointing) first-rounder who’s eligible for arbitration (not sure how that happened already, but yeah–Beede made his debut in 2018, so I guess it is time).

There will be more to discuss in the coming weeks as the relevant dates for team options, free agency, and tendering arbitration offers get closer. But this is the general landscape that we are looking at right now.

I guess the good news is that I wasn’t writing this kind of column two weeks ago right after the season ended. For the first time in five years, the Giants made the playoffs! And it really was a great year. Once the shock and sting of the early exit wears off a bit, we’ll be able to focus on the happier memories and the bright future the team has. Chin up, TWGers! Lefty out.