A Busy and Rewarding Week for the Giants 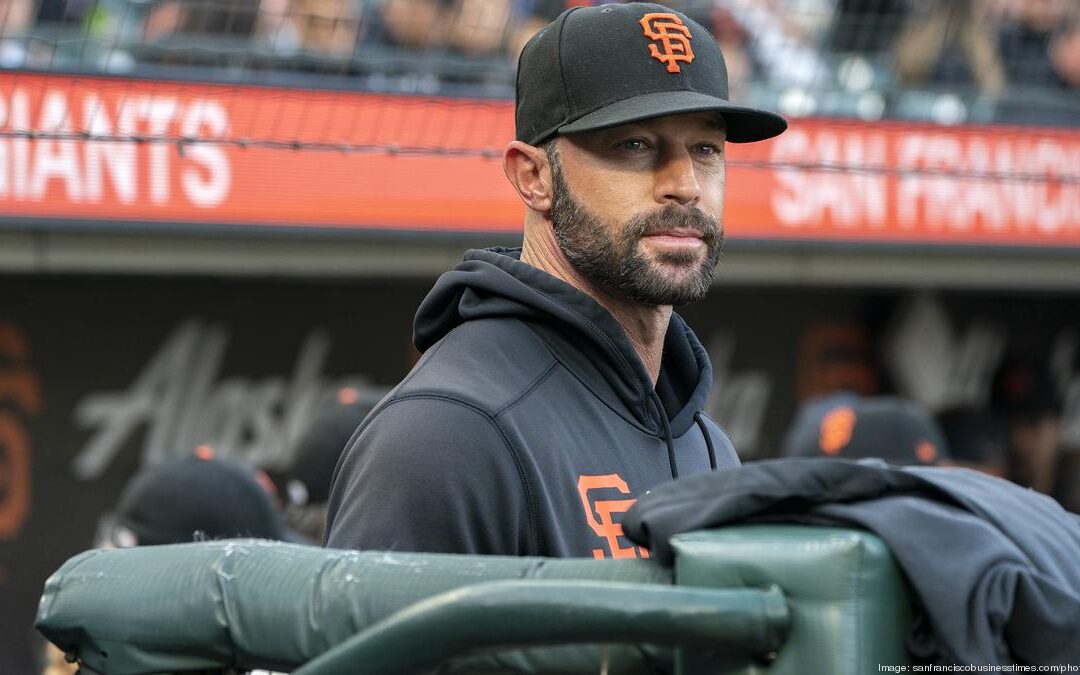 This feels like an unusual offseason so far, at least compared to recent ones. Over the past few years, we could go weeks without hearing a whisper of Giants news. This week, though? Something everyday. Greek Giant already wrote about Brandon Crawford’s fourth Gold Glove, Buster Posey’s fifth Silver Slugger award, Farhan Zaidi’s Executive of the Year award, and the latest additions and changes to the coaching staff. Today we get to talk about manager Gabe Kapler’s contract extension through 2024. And in a few days, Kapler will be announced as the NL Manager of the Year.

Some years ago, I was at a conference in Chicago and was taking a shuttle from the hotel back to O’Hare Airport. The driver was a personable live-wire, and after receiving a call from her dispatcher that somehow frustrated her, rolled her eyes and said, “Some people never get any better at their jobs.” I laughed and said, “Amen, sister. Ain’t THAT the truth.” We tend to think that if someone is experienced and doing a job for a long time, that means they’re good at it, or at least steadily improving. But that’s not always the case, is it?

Kapler has surprised a lot of people in the last couple of years. Many of those people are in Philadelphia and/or associated with the Phillies. Others are Giants fans and even members of the media covering the Giants. In his piece on Kapler’s extension, Andrew Baggarly noted that the new deal was announced two years to the day after the contentious press conference following Kapler’s hire: “a tense and snarling affair that lacked all the usual revelry and optimism associated with presenting a new manager.” I myself was horrified by the hire. As a woman, I deeply resented that my team hired someone who had so badly mishandled a violent assault on a teenage girl that involved Dodgers minor leaguers. I felt a bit better about that after listening to what Kapler and Zaidi had to say about the incident–they both owned their poor judgment and seemed to have learned from their mistakes–but I was still troubled that the successor to Bruce Bochy was a failed manager who had washed out after just two years with the Phillies. I wasn’t sold on Zaidi at that point–his underwhelming 2019 made me wonder if his “genius” label was just hype–and his pivot to Kapler about five minutes after Kapler was fired in Philly really made me question his judgment. I thought the hire was ego-driven: Reportedly, Zaidi backed Kapler over Dave Roberts for the Dodgers’ manager job in 2015 and was overruled, so this was his opportunity to prove that he really was the smart one in the room.

It’s easy enough in hindsight to sneer at someone like me (and the many others who questioned the Kapler hire) as stupid people and bad fans. However, this is actually unfair to us and even more so to Kapler himself. There were reasons to be dubious about Kapler at the time and to wonder whether Zaidi had made a terrible mistake. But what none of us realized is that Kapler was and is extraordinarily capable of learning and changing. He’s reinvented himself since his Philly days and even since his early days as Giants manager. In Baggs’s article are also some measured comments from Brandon Crawford:

“We bought into their way of thinking or creating a lineup or pinch hitters and bullpen usage, but they also bought in on some of the things we mentioned to him,” Crawford said in a recent interview. “Whether that was having a little more trust in the starting pitcher, or how … (being) in the rhythm of the game might cause you to have a really good third or fourth at-bat late in the game. So eyes were opened on both sides.”

Kapler’s debut with the Giants was in late July of 2020 at Dodger Stadium. Besides the fact that the Giants got their butts kicked and looked like they’d go 0-60 after two games, there were a couple of memorable things. First, Kapler annoyed Roberts by not announcing his starting pitchers until the very last minute, to the point where Roberts accused him of gamesmanship. Second, Kapler annoyed Johnny Cueto, the Opening Night starter, by pulling him early (after four innings and 63 pitches), and Cueto made some pointed comments about it to reporters after the game. Kapler had notoriously pulled his Opening Day starter in his debut with the Phillies (despite a low pitch count and a dominating outing), and then the bullpen imploded, the Phillies lost, and no one ever seemed to get past that first impression. After the Cueto incident in 2020, it was easy to roll your eyes and say, like the shuttle driver, “Some people never get any better at their jobs.” Same thing when Kapler stuck with a spiraling Trevor Gott in August 2020, allowing him to blow three save opportunities in the ninth inning in four games. That was the low point of the Kapler tenure, as the Giants were a miserable 8-16 and looked headed for a lottery pick.

Since that last Trevor Gott game on August 17, 2020–which, you may remember, ended on a walk-off homer by then-Angel Tommy La Stella—the Giants have gone 128-70, a .646 winning percentage. Gott never closed another game for the Giants. Learning happened. (OK, there was a Sam Coonrod blip at the end of that season, but Zaidi shipped him off posthaste.) I was at the Giants’ home opener this year, on April 9, 2021, and Cueto again was the starter. He pitched brilliantly, but it was a close game. Kapler had guys warming up in the bullpen and ready to pinch hit at various points, but he let Cueto try to go for the complete game shutout. I’m guessing that was a huge moment for the whole team.

Now, I love everything about Kapler, and that’s not just because of the obvious (107 wins in 2021 and a NL West title). I love his out-of-the-box coaching staff. I love that he manages games aggressively and creatively. This was one of my biggest beefs with Bochy–that he’d punt games in May so that he could (for example) show faith in Santiago Casilla, a decision that he hoped would pay off in September and October (in that case, it did not pay off). Of course, Bochy managed playoff games differently, and that’s why he’s going to the Hall of Fame along with his three World Series rings. But as a fan, I want to see that urgency all season long, and we get that with Kapler. I also love that Kapler clearly cares about his players as whole people, not just what they do on the field. He still comes across a little stilted and weird in his pressers, but I don’t care anymore. I think he’s awesome. In fact, I feel the same way about him that I did early in Steve Kerr’s coaching career with the Warriors: that we’re watching the beginning stages of what may be a Hall of Fame managerial career. (Kerr is another guy who grows and learns. The way he and his staff are re-inventing the Warriors this season is so impressive, and it almost feels like they’ve learned something from the Giants.)

So congrats to the skipper on his extension, and kudos in advance on the award he’s sure to win next week.

Vote Giants for the All-MLB Team

Six #SFGiants have earned nominations for the 2021 All-MLB team

You can help determine the final results by voting at https://t.co/R81MCTikqa pic.twitter.com/umlw3BDbe8

I’m not sure if I’m counting Bryant as a Giant for these purposes, and I’m not really that sold on Jake McGee, but I’ve already cast my vote for the other four.

With all of the big league headlines this week, it might have been easy to miss that the Giants have four players on the Fall Stars roster (for the Arizona Fall League’s all-star game, which happens later today, at 4 p.m. our time, shown live on MLB Network and MLB.com). Pitchers R.J. Dabovich and Gregory Santos, both of whom could factor in the 2022 Giants season, are on the roster, along with catcher Patrick Bailey and outfield Hunter Bishop (the 2019 and 2020 first-round draft picks). Top prospect Marco Luciano was included in the final vote for the last spot on the roster. #ForeverGiant Caleb Kilian (traded for Kris Bryant in July) is also on the Fall Stars roster.

There was a lot of buzz about who might sign where this week but little activity yet, with the exception of lefty Andrew Heaney signing a one-year deal with the Dodgers. Zaidi reportedly met with Brandon Belt’s and Anthony DeSclafani’s representatives at this week’s GM meetings to start discussing the structure of multi-year contracts for both. Kevin Gausman made some candid comments to Baggarly about how much he loved being a Giant and would like to come back but understands that he may have priced himself out of the Giants’ plans. (Baggarly noted in that piece that Zaidi has never in his GM career given out a contract of longer than three years to a starting pitcher.) Gausman also showed a sense of humor in changing his Twitter bio from “Giants” to “Unemployed pitcher looking for a job” and in this interaction with some know-it-all nobody named Jesse who claimed to be speaking for him.

Inside info? News to me!! Only tie I have to OC is the bow tie I got at Fashion Island #FakeNews #WhoIsJesse #ItWasAClipOn https://t.co/HBS6bhu9uM

As I mentioned last week, it’s hard to know if we’re going to have a flurry of free agent and trade activity in the next few weeks, before a possible work stoppage on December 2 after the current CBA expires, or if everyone will just wait to see how that plays out. This next week could be informative, especially since the Hot Stove usually cools off over holidays, and Thanksgiving is coming. Next up this week, besides Kapler winning his award, are the deadlines to accept or reject qualifying offers (Nov. 17) and to add minor leaguers to the 40-man roster to protect them from the Rule 5 Draft (Nov. 19). Stay tuned–we’ll keep you posted. Lefty out.