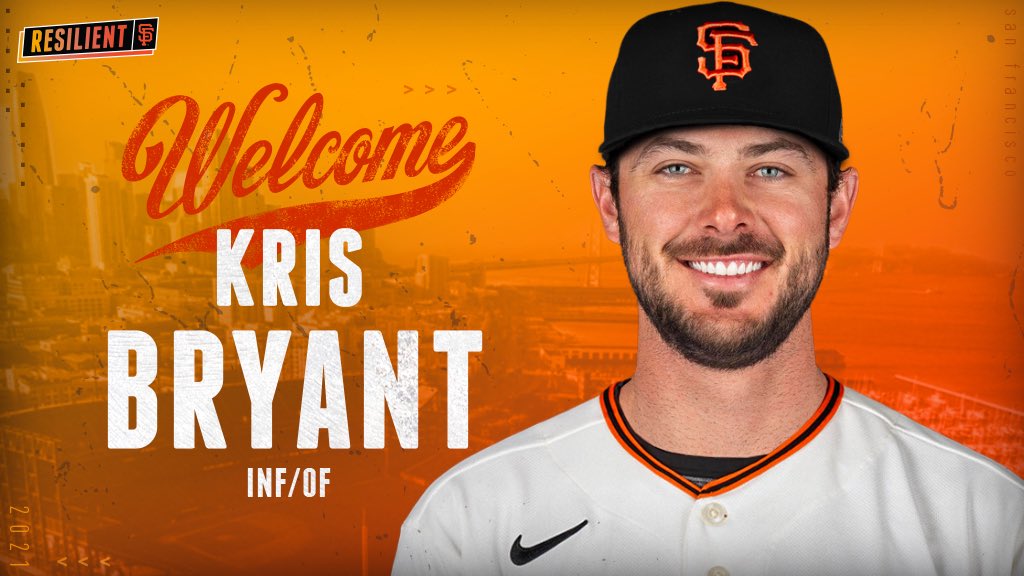 The Giants? Crickets. But there was still one name we hadn’t heard, the one name that had always made the most sense for this Giants roster. And finally, a few minutes before the deadline of 1 p.m. PDT, we heard it on MLB Network: Kris Bryant had been traded to the Giants.

Emotional moment for Kris Bryant as he learns he is being traded to the Giants.pic.twitter.com/bcONWGz94i

Here is the moment that Bryant received the news. As reported by Andrew Baggarly in The Athletic, it was Giants GM Scott Harris on the on the other end of the call. Harris, of course, was the Cubs’ Director of Player Development when Bryant was drafted #2 in the 2013 draft, as he came through the organization, and as he became a Rookie of the Year, a NL MVP, and a hero to generations of Cubs fans who had waited 108 years for a World Series title, which Bryant and his mates delivered in 2016.

Bryant is clearly emotional in the video clip–of course he is. It’s the exact equivalent of if Buster Posey got this phone call at the trade deadline. (Of course, Buster has a contract with a full no-trade clause and would have 10-5 rights by now, anyway, so he was more in the Max Scherzer situation, but you get the point.) At the same time, all indications from Harris and from Farhan Zaidi are that Bryant wanted to come to the Giants, that it was his first choice if he was indeed getting traded.

Farhan Zaidi said he spoke to Kris Bryant, who mentioned that he grew up a huge Barry Bonds fan. Said Bryant was fired up. Zaidi: “I’ve never spoken to a player more excited to come to a new organization.”

Bryant is the perfect fit for the Giants right now. They are struggling against left-handed pitching due to the lengthy absence of Evan Longoria and the disappointing seasons of Donovan Solano, Austin Slater, and the now-demoted Mauricio Dubon. Bryant has some of the best numbers against lefties in MLB this season. He can play third until Longoria returns and then he can move to the outfield, where the left field platoon of Alex Dickerson and Slater has underwhelmed, or he can play CF versus lefties.

It wasn’t a surprise that the Giants traded for Bryant. We’d been talking about it for weeks (along with the pipe dream of also bringing Kimbrel over). But as soon as we heard the news, we immediately waited for the other shoe to drop: Whom did the Giants give up to get Bryant? There was some trepidation. One of the astounding things about this year’s deadline was that teams all over MLB stopped their incessant prospect-hugging. The Dodgers gave up their top two prospects to get Scherzer and Turner. The White Sox gave up Nick Madrigal, a former top prospect, for Kimbrel. The first report on the return for Bryant was this:

Bryant to #SFGiants for Bart and Wade Jr.

It was a “blue checkmark” source, so it was even reported on MLB Network. The Giants’ beat writers scrambled to put out tweets of their own, saying “No, no, that’s not right.” It turned out that the prospects traded for Bryant were RHP Caleb Kilian (Giants’ #30 prospect, currently in AA) and OF Alexander Canario (Giants’ #9 prospect, currently in low A).

This, in my amateur opinion, is a fair return for Bryant because as good as he is (and as good of a fit as he is), he’s still just a short-term rental. Canario is a toolsy young outfielder whom the Giants signed in 2016 for a mere $60,000, and Kilian, the eighth-round pick in the 2019 draft, was having arguably the best season of any pitcher in the Giants system. The Giants gave up value, but they didn’t overpay. This is a trade that seems fair and beneficial to everyone.

Other Pieces of the Puzzle

The Bryant trade is easy to talk about. It was expected, and the return was fair. But there are two other Giants-related pieces of this wild trade deadline that we should discuss. First is the second acquisition, the return of veteran lefty reliever Tony Watson, who spent the past three seasons with the Giants. After the deadline had passed, we learned that the Giants traded three minor leaguers, most notably Sam Selman, to the Angels for Watson. I’ll admit that I don’t understand this one. Now, Watson was a good Giant who pitched well for them, but they already have a solid left-handed core in their bullpen of Jake McGee, Jarlin Garcia, and Jose Alvarez, all three of whom have settled in well after a tough early part of the season. They just got Sammy Long back off the injured list. It was easy to see why a right-handed strikeout specialist would have strengthened the bullpen, but why do they need Watson? And even if they’re attracted by his veteran leadership and his positive history with the team, did they have to send THREE players for a 36-year-old lefty having a mediocre season? Don’t get me wrong–I’m not unhappy that Watson’s back, I guess. I just don’t really get it.

The harder one to talk about is what the Giants DIDN’T do at the deadline. They did get the right-handed bat they needed. They did add some veteran depth to the bullpen. But they didn’t do anything to improve their rotation, nor did they add an impact reliever. Grant Brisbee’s piece on the trade deadline focuses on the Giants’ win-now status, and while he applauds the acquisition of Bryant, he also said this.

If I’m in charge — and, holy heck, you should always root against that happening — I would have swallowed hard and made those deals.

I feel the same. I think the Giants’ rotation is beginning to leak some oil, as is wont to happen right around the first of August. Yes, they have Long and Sanchez back and their top five starters healthy. And yes, Tyler Beede is still in Sacramento and still a possibility to help this season (his latest start on Thursday night was better). When a rotation begins to falter, that also increases the wear-and-tear on the bullpen. Perhaps Reyes Moronta will be able to help, and Camilo Doval is still lighting up radar guns. But it all feels precariously thin.

The Giants are going to get reinforcements on the position player side very soon. Bryant will be here and in the lineup tomorrow (happy birthday to me!). Belt and La Stella are nearing a return, and at some unspecified point, Longoria will be back, too. But they did almost nothing to fortify their pitching staff, and I’ll be candid that it makes me very nervous.

It’s easy to overlook this in the excitement about the Giants taking 5 of 7 from the Dodgers over the past week and landing Bryant, but the Giants are only 7-6 since the All-Star break, including series losses on the road in St. Louis and at home to Pittsburgh (!!!). They had a sloppy, irritating loss to the Astros last night that included the third straight subpar start by Gausman. Thanks to the Diamondbacks and Rockies for helping us out with the Dodgers and Padres, though, and wow, here’s a stat.

Meanwhile, #dodgers lost in AZ and now are 1-12 in extra innings, which is stunning.

[For all the excitement about Scherzer and Turner being traded to the Dodgers, it’s interesting that they didn’t get any bullpen help. I’m sure they felt they needed Scherzer after losing Trevor Bauer and with Clayton Kershaw’s lingering injury, but they didn’t really need Trea Turner. I mean, Turner will be a great addition, but it seemed like they needed Craig Kimbrel. I’m actually kind of shocked they didn’t get him.]

Anyway, let’s hope the Giants can regroup and beat the Astros today and tomorrow. In general, let’s hope that now that the adrenaline from the Dodgers series and the excitement of the trade deadline has past, they can settle in and start playing some better ball than they have in the latter half of July. The Dodgers and Padres aren’t going anywhere.

Finally, a shoutout to ClutchUp as he recovers from his injuries after an awful accident (hit by a car) this week. I also wanted to share a photo of the thoughtful birthday gift he sent me. He did the engraving himself!

Speaking of birthdays, happy birthday today to manager Gabe Kapler! I’m sure he feels that Kris Bryant is a pretty nice present. Win one for the skipper today, guys. Lefty out.