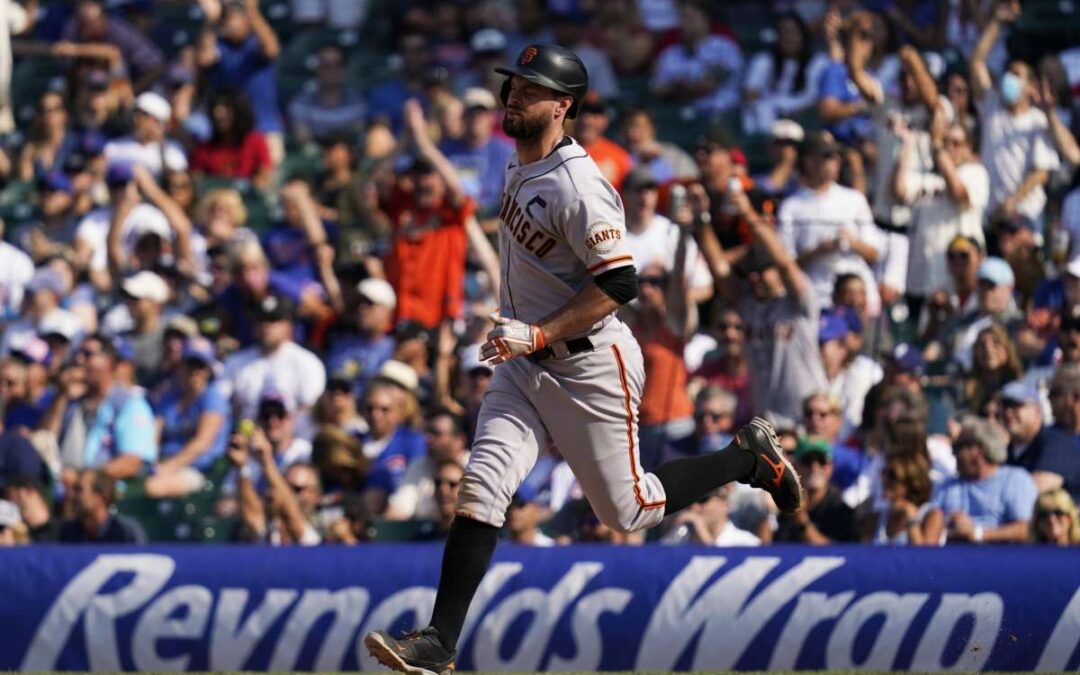 This has been a physically and mentally grueling stretch for the Giants. Before Thursday’s off-day, they’d played 16 straight games that included series against division leaders (Braves and Brewers), last weekend’s showdown series against the Dodgers, and an immediate turnaround to play at Coors Field against a Rockies team that has been extremely good at home. Oh, and during that 16-game period, they lost 40% of their starting rotation to injuries and COVID and have been forced to turn to bullpen games for two of every five outings.

They went 10-6 in that 16-game stretch and, after falling out of first place for about 17 hours last week, came into play Friday with a 2.5 game lead in the NL West.

This series against the Cubs at Wrigley had the potential to be emotionally fraught. The big story, of course, was Kris Bryant’s return to the ballpark that has been his home for seven years to a hero’s welcome from fans that adore him. It was a very emotional day for him.

The Giants also may have been due for a letdown after such a tough stretch of the schedule, with the Cubs playing good ball (8-2 in their last ten).

Early in the game, the announcers and beat writers started commenting with puzzlement about Brandon Belt wearing a large makeshift “C” on his jersey.

"Look at me. I'm the captain now." pic.twitter.com/z0E6HjEzZu

Belt went on to have a great game (two walks, a double, a two-run homer, and two runs scored). In his postgame interviews, he explained the “C.”

Brandon Belt, the captain, is going in the postgame press conference Hall of Fame for this one: pic.twitter.com/sLy7WSPNvO

Apparently on the plane to Chicago, Belt had announced that he was the team captain (“there’s a chance it was self-proclaimed”), so Evan Longoria made him the “C” out of electrical tape.

“I put the C on his jersey today, not thinking he would go out and play with it.” 😂 pic.twitter.com/pSOQRlNDY1

Belt’s antics and deadpan press interviews were received with a lot of amusement by the beat writers and broadcasters, but they also demonstrated once again that this is a loose, happy group of players who like each other. And Belt’s nonsense could only be funny because he had a great game and the Giants won easily, so his being silly didn’t knock anyone off of their team-wide focus on winning. It could be argued that the “C” helped lighten the mood just enough to keep Bryant’s emotional return to Wrigley from being a distraction.

And then there’s the Captain himself. Belt now has 22 homers on the year, tied with Mike Yastrzemski for the team lead. He is also tied with Longoria for the team lead in OPS at .913. Belt’s 22 homers have come in fewer than 300 plate appearances and by far surpass his previous career high of 18, set in 2015 in nearly 500 PAs. As Andrew Baggarly pointed out in his gamer for The Athletic, as recently as late June, Belt appeared to have a season-ending knee injury, and we wondered if we’d seen the last of him in a Giants uniform. Instead, he was able to rehab the injury without surgery, return in early August, and almost immediately had a two-homer game that he dedicated to his beloved grandmother, who had passed away from COVID that morning. He’s been their best hitter since his return, with 11 homers in a little over a month and an OPS in the high .900s.

It remains to be seen what will happen with Belt after this season. He’s thrived like never before under the Zaidi/Kapler regime, and he fits their paradigm perfectly–in fact, you could argue that he’s the template for it. But he’s 33 and has struggled to stay on the field, and the Giants have to acquire almost an entire rotation and maybe re-sign Kris Bryant this winter. For now, though, Belt is still a Giant and absolutely adding to the magic and delight of this 2021 season.

Meanwhile, the Giants won their fifth straight game and are now 7 for their last 8 since the four-game losing streak that briefly knocked them out of first place. Dom Leone’s second stint this week as opener went as well as the first one did–he pitched two clean innings, he and seven colleagues held the Cubs to two hits and one run, and the Giants won again.

We spent most of the game in the car driving around the Maui Upcountry. The SiriusXM feed we were listening to had the Cubs’ radio announcers, and they were grumbling late in the game about what a competitive disadvantage it was to have to face “a different guy every inning” and “they have a lot of really good arms!” It was interesting to hear an approach that was obviously adopted out of necessity (the absence of Johnny Cueto and Alex Wood) being described as if the Giants had some kind of cheat codes. They seemed particularly taken with eventual winning pitcher Camilo Doval (“If I had that kind of fastball and movement, I’d just keep throwing fastballs until it stops working”) and fascinated with Tyler Rogers (“his knuckles are practically scraping the mound”). And they were duly impressed with Brandon Crawford’s latest dazzling double play (assists to Tommy La Stella and Belt), saying it was the best double play they’d seen turned all year.

One of the best double plays you’ll see 😱 pic.twitter.com/729F0zf0NK

I still can’t get my mind around how well this bullpen game worked. I mean, it really worked. Grant Brisbee had two great pieces in The Athletic this week about how the Giants’ hitting depth and their pitching depth is “the story of the season,” and we certainly saw it with the pitching in this game. Because of the five-run lead, there was no need for Jake McGee, and–wait, when did Jay Jackson come back? Turns out Jose Quintana is off on paternity leave, so there was Jackson in the ninth.

Because the collective pitching effort was so great, they were able to stay close while long-time nemesis Kyle Hendricks, who found his old self when he saw Orange and Black, stymied them. Once the Cubs’ relievers came in, it was BOOM-BOOM, with two-run homers in the seventh by Captain-Maker Longoria and Captain Belt.

So it’s been a great, great, great week for the Giants, who blew past the 90-win mark for the first time since 2012 and are now at 91 wins with 21 games to play. Depth, heart–and the leadership of Captain Brandon Belt.

This is a match-up that seems like it should favor the Giants. Davies was the most recognizable name in the trade where the Cubs off-loaded Yu Darvish’s contract to the Padres last winter, but this hasn’t been a very good season for him. Meanwhile, Gausman, after some shaky outings in July and early August, has struck out 16 in 12 innings in two September starts. It would be nice if we could get some help from the Padres this weekend, too, but I’m not holding my breath.

This is my last post from Maui, as we head back to California on Sunday morning. It’s been a great vacation, but I’m looking forward to seeing Giants games on our big TV at home instead of on the MyTeams app on my iPad (better than nothing!). Lefty out.