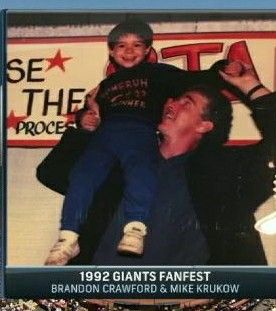 It turns out that Brandon Crawford and Mike Krukow have the same birthday, January 21, and that Krukow is exactly 35 years older than Craw. So on Friday, #35 turned 35, and Kruke turned 70!  Happy Birthday to both of them! I saw the amazing photo above on Twitter yesterday. Weve all seen that photo of little Brandon Crawford at Candlestick Park in 1992, pleading with then-NL President Bill White not to let the Giants move to Tampa after that season. This photo is from earlier in the same year at the Fan Fest. Craw was 5 and Kruk was 40 and already a Giants TV analyst! A young Brandon Crawford stands next to his father, Mike, while he holds a sign with a message for National League President Bill White on Sunday, Sept. 27, 1992, at Candlestick Park.

Alex Pavlovic did a “#35 at 35” interview with Crawford this week that was a pretty fun read. Among other things, he mentioned that the Crawfords had a tenth-anniversary vow renewal in Hawaii (Maui, I believe) attended by lots of A-list baseball players, including Bryce Harper(?). (I get why Gerrit Cole was there–he’s married to Crawford’s sister.) Logan Webb, who gets around, was not only in Hawaii for the party but also in Arizona for the joint Braxton/Brandon birthday party I posted video of last week. Webb himself got married this offseason, as he discussed in a recent interview with the Chronicle’s Susan Slusser.

So in honor of these big birthdays, today’s column is about why we love #35 and why we love the guy who turned 35×2.

I’m considerably older than BCraw, so I may not still be around when he turns 70. That would make me…ahhhh, never mind. They told me there would be no math in this columnist job. Anyway, here’s why we love Brandon Crawford: To sum it all up, Brandon Crawford is the best shortstop in SF Giants history, and we’re all happy to have him back for another two years, especially after Buster broke our hearts by retiring at 34.

This is a homer sentiment, but is there any broadcast duo more beloved than Mike Krukow and Duane Kuiper? We love them individually and together, and I hope there’s a way to send them both to the Hall of Fame as a package deal. Can you imagine what a party that would be? Can you imagine the amazing speech Krukow would give? I was at the 2010 World Series parade at San Francisco City Hall when Krukow gave his great speech. I was there at Opening Day 2019 when he gave the tribute to the late Peter Magowan. I’ll never forget the speech he gave at the fall 2018 memorial service at the ballpark for Willie McCovey–reflecting on McCovey’s grace and sunny nature despite pain and loss of mobility in his final years and Krukow’s own debilitating condition and saying, with tears in his voice: “I want to be like him” (start around 6:10 in the video clip linked here).

There are too many great K&K moments to do them justice in one birthday post also dedicated to Brandon Crawford, so I’ll just drop this recent favorite, when Kuiper returned to the booth after an absence for cancer treatments and surprised Krukow. My house is dusty again, dammit.

Duane Kuiper turned 70 in 2020 and now Kruke has joined him as a septuagenarian. Kuiper battled cancer in 2021. Krukow, it was disclosed back in 2014, has a degenerative muscle disease called inclusion body myositis. By the time I met him in person in July 2016, he was walking unsteadily with a cane. (We were on the same Amtrak train from Boston to New York, and I met him as we were walking out of Penn Station. He was as friendly and personable as he seems on TV.) A couple of years later, he got an awesome service dog named Patriot. He gradually reduced his travel to only the West Coast, and then in 2020, it was announced that he wouldn’t travel at all any more but would pair up remotely from the NBCS-BA studio with Kuiper. That sounded weird at the time, but just a few months later, after COVID descended, doing everything remotely became normal. Anyway, we know the deal. Not only are our beloved K&K getting older, but they’re also both dealing with serious health issues.  With Krukow’s travels gradually getting more limited, the Giants have quietly begun auditioning possible replacements such as Javier Lopez, Shawn Estes, Randy Winn, J.T. Snow, and Hunter Pence (Jeremy Affeldt only lasted a year for reasons that were never really shared.) This partnership–between them and between generations of Giants fans–isn’t going to last forever. We should treasure every minute we have left and cherish the memories. Happy 70th birthday, Meat.

Hahahaha. There isn’t any “Giants news.” OK, unless you want to count the new Baseball America top-100 prospects list, which includes five Giants (same five as the last list–Luciano, Bart, Matos, Ramos, and Harrison). Or the tidbit that Alex Pavlovic, filling out his first Hall of Fame ballot (you have to be in the BBWAA for 10 years to qualify) voted for Tim Lincecum (and yes, Barry Bonds). Or the news that Seiya Suzuki named the four major league pitchers he most wants to face, and one of them is…Tyler Rogers? Love it! On the other hand, does that mean he’s not seriously considering signing with the Giants? Bummer.

Seiya Suzuki names four pitchers he wants to face the most in MLB:

Finally, congratulations to the 49ers, who are bringing back memories of gritty Giants championship teams with their “torture” games. And good on our skipper, Gabe Kapler, for representing for the Bay Area’s (only remaining) NFL team! Lefty out.