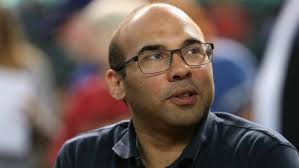 Hello from sunny San Diego!  I’ve already said a lot in my last two columns about how badly the Giants are playing, as have others here and elsewhere. I’m not going to belabor it today, in part because I’m on vacation and want to get out and have some fun before I have to go to the game–oops, I mean before I get to go to the game(!). So here are just a few impressions about last night’s game in particular and where the Giants are at this week.

Baggs was right about the ballpark experience in SF being stale

Surf Maui and I spoke on the phone before yesterday’s game. He’d been at Thursday night’s game and I hadn’t, and his advice was: “Bring ear plugs. It’s LOUD.” SM was right. It IS loud at Petco, louder than I remember on previous trips here. In my experience, though, it brought good energy, along with catchy lighting and fun between-innings entertainment. The ballpark was nearly full, and even though there were, as always, plenty of Giants fans trying to represent, the majority were Padres fans, and they were enthusiastic and having a great time.

This was my first game in 2022 at a ballpark other than Oracle, and the difference in energy level was quite noticeable. And it’s not just the product on the field because the Giants have won 3 of 4 games we’ve attended in San Francisco this year, and they were exciting, lively games that the fans got into. It’s the ballpark ethos that’s different.

In case you’re curious about the food, we arrived early and had tacos, margaritas, and chips and guac from a ballpark taco stand, all very good, especially as ballpark food goes.

The Gaslamp District around the ballpark is also very lively and fun–back to what I remembered from 2019, and our man on the spot Cole Kuiper had this observation after the game. I’m glad he was doing his research because MrLefty, BrotherLefty, and I are not in the “bar hop around the Gaslamp” demographic anymore (and to be honest, I never really was).

lmao a resounding "f*ck the Dodgers" chant is going on outside the Gaslamp bars, bringing Giants and Padres fans together in harmony.

“Unwatchable” pretty much covers it

These last couple weeks of Giants baseball, dating back to the road trip where they failed to sweep the Pirates and then lost 3 of 4 in Atlanta, have been some of the worst I can ever remember watching. The human brain tends to block out traumatic memories, so maybe I’m wrong about the 2013, 2017, and 2018 seasons, all of which were losing Giants seasons (2017 especially so) and hard to hang in there for as a fan. Maybe you need to go all the way back to 2007-08 to find baseball so uninspiring, where you forgot (or tried to) about the Giants for days or even weeks on end, only occasionally paying attention when Barry Bonds was hitting (in 2007) or Tim Lincecum was pitching (in 2008). Even then, though, the Giants at least had that star power. This team has none, zero, nada, zilch.

OK, I sort of take that back. Joc Pederson was named as a starting outfielder for the National League All-Star team yesterday, so that is, literally, “star power.” Except…

The Giants lineup is so good that they have an All-Star starter in Joc Pederson sitting on the bench. That’s depth.

Now, I know Blake Snell pitches left-handed. But the Giants literally had Yermin Mercedes playing left field last night. Many have noted that Mercedes reminds them of Pablo Sandoval, but did you ever think “Oh, I wish I could see a whole game with Pablo playing outfield”?  Nah, me neither. The Giants got 5 hits last night, or 2.5 times as many as they got Thursday night, and Mercedes got one of them. I still don’t think that justifies sitting an All-Star outfielder so that a portly, recently DFA’d non-outfielder could play left field for a team struggling with offense (which Pederson can help with) and defense (ehhh, maybe not as much, but I’d still rather have Joc than Mercedes out there).

And then there’s this observation, which you could similarly make about Mauricio Dubon.

I know it’s not the point but Yermin Mercedes playing the OF when they just traded Steven Duggar because there were so many outfielders is making me have a mild stroke.

So in last night’s game, we knew it was over three batters into the bottom of the first after Sam Long gave up three hits and three runs. It was not the Padres’ bats that convinced us. Until Jake McGee came into the game in the bottom of the eighth (more on him in a minute), the Giants’ bullpen did a pretty good job of shutting them down. No, it was the top of the first that quickly convinced us that the Giants had no chance in this game once they got in an early hole. The Giants looked just awful at the plate, striking out 14 times. Eleven of those were by Snell, who came into the game having 60 for the season. Snell is a former Cy Young winner, but he’s not really having a good year. He came into last night’s game with an ERA over 5 and an 0-5 won-loss record. But the Giants were hacking and lunging and/or, in the case of Austin Slater leading off the game, staring at strike three as it went right down Broadway.

All that said, congratulations to David Villar for hitting his first major league homer, one of the few bright spots for we Giants fans in the park.

It was nice to see Brandon Belt hit a pinch-hit two-run homer in the ninth, but it was too little, too late, thanks to Jake McGee (I promise, I’m getting to him). The Giants set a major league record for pinch-hit homers last season, but until Darin Ruf’s homer in Arizona on Wednesday, they’d hit none this year. Now they have two. The lack of pinch-hitting success (.659 OPS compared to .719 last year) is one of the dead canaries in the 2022 coal mine, since Farhan Zaidi’s roster construction and Gabe Kapler’s in-game strategy depends so much on it.

The problems, in order of suckitude

I got both of these words from listening the to the latest Baggs and Brisbee podcast while working out my hostilities in the hotel gym this morning. Baggs gave a measured and fair assessment of where the Giants are right now and how the offseason had led up to this point. He said that bringing both Brandons back after their great 2022 seasons made sense and that not trying to outspend the Dodgers, especially when there are three wild card spots and no sudden-death wild card game, also seemed practical. At the same time, he felt that there was complacency (“we have the secret sauce!” “we can turn journeymen into stars!”) and culpability on the part of the front office.

Farhan Zaidi is in the fourth year of his five-year contract. After the amazing 2021 season, which not only included a stellar performance by the major league club but also huge strides forward for the minor league system, a contract extension seemed like a foregone conclusion. Is it now? If the Giants finish 2022 well under .500, I’m sure Zaidi doesn’t get fired, but he might have to prove he can right the ship in his final contract year if he’s going to continue in his role. Everything about the Giants has regressed this year, and things are such a mess right now that not only does the 2022 team seem unfixable, but it’s hard to figure what he can do to make 2023 any better.

Here are a few things he should consider, whether now or after the season.

OK, I guess that’s enough for now. That breakfast buffet downstairs isn’t going to eat itself. We’ll be out at the game later, hoping for at least an entertaining performance from Carlos Rodon. The game is at 4:15 p.m. Tony Gwynn Field time. Lefty out.