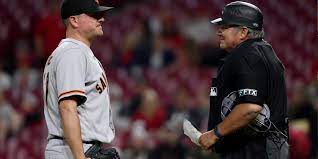 Last night, some of y’all were gleefully speculating on what kind of scorched-earth column I’d write after the Giants’ ugly loss to the Reds, and I said I already had a title. The one I had in mind was “Disgusting,” but as you can see, I toned it down–a bit.

It was a strange, strange day for the Giants. We were in the car listening to KNBR before the game, and news began trickling out about some “altercation” at the ballpark. Turns out Tommy Pham slapped Joc Pederson across the face because he believed Joc had “cheated” in their fantasy football league. Pederson explained the dispute in detail after the game and expressed regret for having been a “distraction” that might have led to the Giants’ poor play.

“We didn’t play a good game tonight. If I had something to do with that, being a distraction, that makes me feel really bad.”

I was thinking the same thing–that Joc needed to take responsibility for being a distraction–but in reading all the coverage of the incident, it really sounds as simple as this: Tommy Pham is a psycho. It appears that Joc didn’t retaliate and that MLB is investigating Pham, not Pederson. After some discussion during the two-hour rain delay, the Reds and Pham agreed that Pham would sit the game out pending an MLB investigation.

So maybe it’s not Joc’s fault that Pham acted like a lunatic. I still don’t think he should have been at the Warriors game on Thursday night when the team was in Cincinnati. At minimum he got to bed late, got up early, and had to take a lengthy flight on a game day. It wasn’t clear whether Joc flew commercial or if Joe “Light Years” Lacob, the Warriors’ owner, jetted him to Cincinnati. Whatever the details, none of this could have been great for Joc’s physical or mental preparation for the game.

Gabe Kapler and the National Anthem

I had conflicted feelings about this one. If the Giants had played well and won, or even if they had lost but just hadn’t played so poorly, I don’t think I would have felt at all critical about Kapler’s announcement that he wouldn’t take the field for the National Anthem until further notice.

“I don’t plan on coming out for the anthem going forward until I feel better about the direction of our country.”

Who knows how much of a distraction this announcement, plus dealing with the Pederson/Pham incident, not to mention a two-hour rain delay, caused Kapler and the Giants–but the effects were public and painful.

In the bottom of the eighth, with the Giants trailing 3-1, Kapler called for newly activated Jake McGee to come in from the bullpen. Except there was one problem: McGee was not on the team’s lineup card for the night, so he was ineligible to play in the game. He had to leave the mound.

Giants reliever Jake McGee took the mound but wasn’t allowed to pitch because his name wasn’t on the lineup card pic.twitter.com/7ojI4quPzt

The Giants then had to bring in Jose Alvarez, who wasn’t warmed up or mentally prepared, and it went about how you’d think it would–2 hits, 1 walk, 1 hit batter, and 2 runs. Only one of the runs was earned because Joey Bart, who also had just come into the game, got called for catcher’s interference on a play that should have ended the inning with just one run scored. Instead, the error forced in another run.

Managing the lineup card is the job of the bench coach, Kai Correa, but Kapler appropriately noted that the buck stops with him.

Kapler wouldn't throw his bench coach under the bus https://t.co/VAC0wHLZCV

OK, back to Kapler and the anthem. In real time, I was disgusted (there’s that word again) that our usually clear-thinking manager had made/allowed such a boneheaded mistake, and I blamed it on all the drama about him and the National Anthem. And as a short-term reaction, it’s probably a fair one.

But I also read Kapler’s postgame comments about why he was doing it, along with his blog post explaining his thoughts. And I concluded that even if he was distracted and it hurt the team last night, that’s a small issue in light of the horrific tragedy in Uvalde, Texas, this week that motivated Kapler. It’s worth remembering that Steve Kerr made similar comments right before the Warriors’ Game 4 in Dallas on the day of the mass shooting–and the Warriors went out and lost that game. Here are a few thoughts, in no particular order:

The Bay Area is lucky to have Kapler and Kerr leading their respective teams.

OK, the game itself

Having discussed what a strange day the Giants had, let’s dispense with last night’s game: They played poorly and lost to a bad team. This was Carlos Rodón’s third straight loss after a great start to the season–he didn’t get blasted off the field like two starts ago in St. Louis, but he wasn’t particularly impressive, either (at least not “$22 mil impressive”). The Giants’ offense couldn’t get anything done against some guy named Graham Ashcraft, which sounds more like he should be sipping tea at Downton Abbey than pitching for the Cincinnati Reds. The one rally the Giants mustered, against a reliever in the top of the eighth, was killed by an inning-ending double play hit by Brandon Crawford, who sure doesn’t look like he’ll be getting any MVP votes in 2022 and can go ahead and make other plans for All-Star week. (I hear Jalynne really likes Disneyland.) And we already talked about the bottom of the eighth and Alvarez/Bart.

Anyway, it was a forgettable evening all around–at least the baseball part. Some of the other stuff isn’t going to be forgotten anytime soon.  It was a disappointing way to start a long road trip against weaker opponents, but let’s face it–the Giants have not been playing well, so who’s to say who’s really “weaker” right now? They went 2-4 this week, and despite a somewhat surprising series victory at home against the Mets, they really played just 1.5 good games this week. I’m only giving them half credit for that wild win on Tuesday night that almost was the ugliest loss of the year.

I mean…if the Giants can’t get something going off this guy…I just don’t know.

Rough stretch. We’ll see how things look a week from now. Lefty out.