Dodgers and Rumors of Dodgers 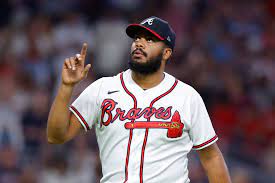 You will hear of wars and rumors of wars, but see to it that you are not alarmed. Such things must happen, but the end is still to come. (Matthew 24:6, New International Version)

There’s been a lot of Giants-relevant news this past week, and we’ll get to it. There have also been Giants-related rumors, and a lot of them circle back to…the Dodgers. No, I don’t just mean “keeping up with the Dodgers.” I mean recent/former Dodgers who are suddenly popping up in Tweets and articles about the Giants. It creeps me out a bit, honestly. So let’s break it down.

OK, at this moment it’s stretching a point a bit to associate Pederson with the Dodgers. After all, he spent 2022 wearing Orange and Black and was an All-Star this year. Furthermore, he was on two other teams in 2021 after leaving the Dodgers as a free agent. But he was drafted and developed by the Evil Empire and played a lot of years there. Joc, not surprisingly, could not turn down the $19.6 mil qualifying offer dangled by the Giants, so he’ll be back for 2023. He was polite in his comments after taking the offer, but let’s not kid ourselves: He probably wanted to go elsewhere, but I’m sure Mrs. Joc, who just gave birth to their third child, explained to him that they were not turning down that kind of money. Anyway, welcome back, Joc!

It’s stretching a point even further to call Turner “a Dodger,” since he wasn’t homegrown and was only traded to LA in the middle of 2021. I don’t know how serious any of the stories connecting Turner to the Giants are, except that it appears that Farhan Zaidi is talking to all of the four top shortstops on the free agent market. Grant Brisbee has been doing a series of articles for The Athletic on the pros and cons of the free agents the Giants might sign, and he just did one this week on Turner. He’s not as bullish as you might imagine on Turner, preferring Carlos Correa among the big name shortstops. However, he does observe that of those four, Turner has experience playing second base (after being traded to the Dodgers, who already Corey Seager installed at shortstop), and that experience could help bridge the gap between right now and the end of Brandon Crawford’s contract.

Whatever. I personally would love to have Turner on the Giants, but I don’t think he’s coming here–he’ll have his pick of teams to sign with, it’s well known that he prefers the East Coast, and if he did stay in California, why wouldn’t he just go back to the Dodgers? So I’m not spending much mental energy imagining Turner as a Giant.

OK, now we’re getting into weird territory. The entire Cody Bellinger saga is weird, even without connecting him to the Giants. Bellinger, the son of a former MLB player (Clay Bellinger), is one of those brilliant Dodger draft picks that make Giants fans crazy. Drafted in the fourth round out of high school in 2013, he was in the majors by age 21, won the NL Rookie of Year Award in 2017, and won the NL MVP Award in 2019 at the tender age of 24. He is still only 27 years old.

But things went very wrong for Bellinger after 2019. Though he helped the Dodgers win a *World Series in 2020, he battled serious injuries in 2021 and struggled mightily at the plate in 2022 (lowest on base percentage of any qualified major leaguer). Unbelievably, despite his awards and three World Series appearances in four years, Bellinger was nontendered by the Dodgers yesterday and is now a free agent. Because of where Bellinger is on the arbitration time line, he was scheduled to make north of $20 mil next year, and the Dodgers ultimately decided that was too rich for their blood.

So even though it’s a bizarre chain of events, Bellinger’s non-tender was somewhat expected. When it was announced yesterday, this was one reaction:

I know a team that needs a good defensive center fielder 🤔 https://t.co/sZzrUc0NYM

Meanwhile, Grant Brisbee promptly dropped another article in his series on free agent targets, this one about Bellinger. I kinda think maybe Grant had this one ready to go for the arbitration/non-tender deadline. Of course, Alex is right: The Giants desperately need a good defensive center fielder, and Bellinger is one of those. Somewhat surprisingly, he’s only won one Gold Glove Award (in 2019), but he’s widely considered to be an elite defensive outfielder. He’s better than another possible free agent target, the Mets’ Brandon Nimmo.

So would the Giants pursue Bellinger? I kind of think not, mainly because his hitting fell off a cliff these past few years, and if the Dodgers, who created him, couldn’t fix him, can anyone else? On the other hand, he did hit 19 homers last year while playing excellent CF defense, and if the price was right…there’s also the fact that both Zaidi and Gabe Kapler, who was director of player development for the Dodgers when Bellinger was in the minors, know him very well.

This is my own favorite memory of Bellinger as a Dodger. “And Bellinger throws it SO HIGH…”

OK, this is one rumor I absolutely did not see coming, mainly because it seems like the Giants have many other higher priorities for spending their money than buying another closer. Jansen, of course, spent 2022 with the Braves after the Dodgers let him walk despite years of great service to them. Jansen ended up signing a one-year $16 mil deal with Atlanta, while the Dodgers traded A.J. Pollock to get Craig Kimbrel and pay him $16 mil instead. The Dodgers don’t make too many bad decisions, but this was one of them. Jansen led the NL with 41 saves, helping the Braves to another NL East title. Kimbrel was so bad for the Dodgers that they didn’t even have him on their playoff roster (for the four games that they were actually in the postseason, LOL).

Anyway, I have no idea how serious of a rumor this is, but it definitely was out there yesterday.

I still wonder why/if Zaidi would actually spend serious money on a veteran closer, especially when they already have a good, young, cheap one in Camilo Doval. But then you remember that the Giants’ bullpen was really bad last year, probably the difference between being a playoff team or not in 2022. Most of the guys they started with in 2022 are gone. It looks like only Doval and Tyler Rogers will be left standing from that Opening Day bullpen. They need to rebuild, and adding a proven closer who could provide bullpen depth does not sound like a terrible idea, especially if they could do so while still meeting their other needs. I’ve always thought Jansen was really good, and he seems like a great guy. We shall see.

The Dodgers, in general

Since the offseason began, the Dodgers have declined Justin Turner’s team option for 2023, non-tendered Bellinger, and may well lose Trea Turner if he signs elsewhere. Kimbrel’s money is off their books, too. They also had to be somewhat surprised when Tyler Anderson turned down their qualifying offer and promptly signed a three-year deal with the Angels. Once the news about Bellinger broke yesterday, pundits immediately pivoted to all the money the Dodgers have freed up, so now they can go after Aaron Judge or Justin Verlander or…/cough cough Carlos Rodón?

The Dodgers are shedding millions in payroll. Will they sign Aaron Judge next? https://t.co/g0f1xwDQeD

So to sum all this up, even as the Giants try to make their own offseason splash, it seems like all we hear about are…Dodgers. I guess this is what comes of having former Dodger executives running your team. Sighhhhhhhh.

As I wrote in my last column, this past week was going to be an important one in terms of the Giants’ current roster, and a lot did happen. I don’t really have space to analyze all of it today, but I’ll just sum it up for you.

That’s…a lot of activity, and I’ll just make a few brief comments. Since Jarlin Garcia, Zack Littell, and Jharel Cotton were already off the roster, there were no surprises with the arbitration-eligible players. LaMonte Wade Jr. was really the only borderline case, but Zaidi said during the GM meetings last week that they would tender Wade. It’s a bit surprising that eight of their ten arbitration-eligible players don’t have deals in place yet because the Giants usually like to get that done before the November deadline, but I’m choosing to believe that the front office is too busy putting the finishing touches on Aaron Judge’s contract to work out these deals right now. They can do all that over the holidays after they put Judge, Correa, and Verlander under Giants’ fans’ Christmas trees.

We all expected Luciano and Matos to be added to the 40-man roster, and a good number of us guessed that Beck would be, but the other two (Cruz and Winn) were more of a surprise. Cruz is another low-minors high-strikeout guy being protected from the Rule 5 draft like Doval/Santos/Castro two years ago and Randy Rodriguez last year, and as we saw with Cole Waites in 2022, guys like that can shoot through the system pretty quickly. Winn, a fifth-round draft pick in 2018, is a starter who pitched at three levels in 2022. His stats don’t jump off the page at you (though he did have 125 strikeouts in 108 innings in 2022), but clearly they see something they value in him.

Of the DFA’d players, only Garcia and Vosler are surprising at all. The Giants have added two left-handed infielders to their roster (Wisely and Isan Diaz), and Tommy La Stella is, amazingly, still a Giant, so it sounds like a numbers squeeze for Vosler. I wouldn’t say I’m surprised by Donnie Walton being DFA’d (thank goodness!), but it’s worth noting that the young pitcher they traded to Seattle for Walton, Prelander Berroa, was added this week to the Mariners’ 40-man roster. That was a bad deal. (OK, I’ll give an equal opportunity nod to the way Zaidi fleeced the Mets for Darin Ruf. I still can’t quite believe that one.) Along similar lines, the acquisition of Wisely is the latest addition to the six-degrees-of-Trevor-Rosenthal saga. Rosenthal, you’ll recall, was still rehabbing an injury when the Giants signed him in July. He was traded 12 days later to the Brewers at the trade deadline for an outfielder named Tristan Peters…who was just traded to the Rays for Wisely. Has Zaidi acted Wisely, here? We at TWG will stay on this developing story! (Rosenthal, by the way, never threw a pitch for the Brewers, either.)

OK, that’s probably enough for this week’s column. There’s a lot more to talk about as to the implications of all these roster moves for the 2023 Giants, but there’s time for that. With Thanksgiving coming up this week, we may not get a lot of Hot Stove action until the Winter Meetings in early December. Meanwhile, we’ll just listen to the rumors and refresh Twitter…well, for as long as there still is Twitter. Have a great holiday, y’all. Lefty out.