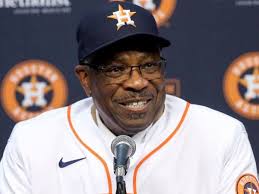 The Giants’ fanbase has a conflicted relationship with Dusty Baker. Some will never get over the Giants’ stunning collapse in Games 6-7 of the 2002 World Series, and some still mutter “Salomon Torres” every time they hear Dusty’s name. (By the way, Torres actually wasn’t that awful in Game 162 of 1993. He gave up three runs in 3.1 innings. It was the bullpen, especially Dave Burba and Dave Righetti, who gave up four runs each, that really imploded.)

At the same time, Dusty is associated with some great Giants memories. The new ownership era, which began in 1993 with Dusty’s hire and the signing of free agent Barry Bonds. The worst-to-first NL West title in 1997, the opening of the new ballpark in 2000 plus another NL West title, and the pennant-winning 2002 team. If it weren’t for the 2010-14 Giants, we’d be saying that Baker presided over the best ten years in San Francisco Giants history. The 60s Giants were better in terms of won-loss percentage and Hall of Famers, but they made exactly one postseason appearance in that decade. All in all, the Dusty Baker Era was pretty successful and had a lot of fantastic moments. (Oh, and we also associate him with one of the most dramatic postseason comebacks in MLB history, the Giants’ win over Baker’s Cincinnati Reds in the 2012 NLDS.)

After leaving the Giants, Baker has gone on to lead four other teams to the postseason. He especially had success with the Nationals, who won 95+ games in his two years at the helm. But in both years, the Nats didn’t make it out of the first round of the playoffs, so an impatient front office ousted him. That seemed like the end for Dusty’s managerial career–he’s now 71 years old and has had serious health issues. But the dramatic offseason implosion of the Astros organization, their reputation ruined and their general manager and manager suspended by MLB and then fired by the owner, opened up an unexpected door, a (likely) last chapter for a very successful managerial career. The Astros were in disgrace but they were still good, still expected to compete among elite American League teams. They needed a seasoned manager, a proven winner. They also needed someone with a pristine reputation, someone above reproach. Bruce Bochy would have fit the bill, but he had just retired a couple months earlier. So they called Dusty Baker.

It was not an easy road for the Astros this year, and not just for the obvious reason (the pandemic). They had already lost ace Gerrit Cole to free agency, and they lost Ace #2, Justin Verlander, to injury. They were smarting psychologically from the fallout of being universally despised by the rest of baseball. They dodged a bullet somewhat in that they didn’t have to face booing, sneering fans in road ballparks all season, but it clearly still bothered them. But they made the playoffs, finishing the regular season with the same 29-31 record the Giants had. Then they knocked out two superior teams in the wild card round (Twins) and the division series (A’s). They went down 3-0 in the ALCS to the #1 seed, the Rays, won three straight, and then lost a tight Game 7. The Astros did much better than anyone thought they could, and Baker deserves a lot of credit for that.

This says it all about Dusty Baker: pic.twitter.com/i1GvJ8JsQ0

Dusty Baker: "You gotta love this team, well some people hate this team, but you gotta respect this team.”

Both of these league championship series have been very twisty-turny, and both have gone to the ultimate Game 7, despite the Rays’ 3-0 lead over the Astros and the Braves’ 3-1 lead over the Dodgers. Even though I wish that the Braves had already ended the Dodgers and still will be rooting for them to do so tonight, a Game 7 is the ultimate treat for baseball fans, and we got two of them this weekend.

Interestingly, if the Dodgers win tonight and face the Rays, that will mean that the top seeds of both leagues navigated this unprecedented 16-team postseason field to get to the World Series. You know, kind of like back in the 60s, when the best team of each league just went on to the Fall Classic. So for all the handwringing about an extra round of three, neutral sites, and lack of off-days, things have pretty much worked out the way they should have. Even if the Braves win, they were the #2 seed in the NL and also deserving.

Who will win tonight? Well, it seems like the momentum is squarely with the Dodgers after winning two straight to stave off elimination. The Braves are going with stud 22-year-old rookie Ian Anderson, he of the six major league starts before the postseason. (And whatever happens tonight, look out for the Braves for years to come, even if they lose Ozuna. Exciting young pitching to go with a loaded lineup.) The Dodgers are starting, uhhhhh, checking, checking…well, it’s still officially TBD, but it sounds like it’s either Game 2 starter Tony Gonsolin or Game 3 starter Julio Urias, with possibly Brusdar Graterol as an opening and Clayton Kershaw in the bullpen. This ESPN story breaks down the possibilities in more detail.

It’s hard to really preview without knowing who the NL representative will be, but it should be an interesting series. The Rays have a bunch of guys you’ve never heard of until now, with the possible exception of 2018 AL Cy Young winner, Blake Snell. Oh, there’s the guy who just became the first non-pitcher rookie to ever win a LCS (or World Series) MVP award, Randy Arozarena. Arozarena last night broke the rookie postseason record for homers with 7–previously held by Evan Longoria, also with the Rays, in 2008. If he hits two homers in the World Series, he’ll hold the major league record for homers in a single postseason.

The @RaysBaseball and Randy Arozarena are dancing their way into the World Series! @Dodgers or @Braves? Who would you rather see them play?#RaysUp #AstrosTwitter #MLBPlayoffs #baseball #deportes pic.twitter.com/1nH68SqnhH

If the Dodgers advance, they’re (obviously) studded with stars. The Braves are more similar to the Rays with their young no-name pitchers, but their lineup is nearly as scary as that of the Dodgers.

The World Series, TBD vs. Rays, will begin Tuesday. All games will be at the Rangers’ new ballpark in Arlington, and all will start at either 5:08 or 5:09 p.m. (???) Pacific time. They will play two games, have an off-day, then three games (if necessary), another off-day, and then the final two if necessary. I vote against an October 28 Game 7 win for the Dodgers because that would fall on the anniversary of the Giants’ 2012 championship, and we don’t want to share any holidays with the Bums.

What’s next for the Giants?

Once the World Series ends, there will be a lot of decisions coming up–qualifying offers, arbitration tenders, protecting prospects from the Rule 5 draft. Plenty of time to get into those later, but, for example, the Giants will have an almost immediate 40-man roster crunch. They will have five players drop off for free agency (Gausman, Smyly, Cahill, Watson, and Ruf), but they have to add back in players who are injured (Beede, Garcia, Moronta) and on the restricted list (Posey and acquired prospect Jordan Humphreys–I’m not sure why he was on the restricted list).

We’ll get to all that. For now, just enjoy the last week or two of 2020 baseball. I’m just glad I don’t have to choose between rooting for the Astros or the Dodgers in the World Series. Go Braves tonight!  Lefty out.