Game Up? Game Up! 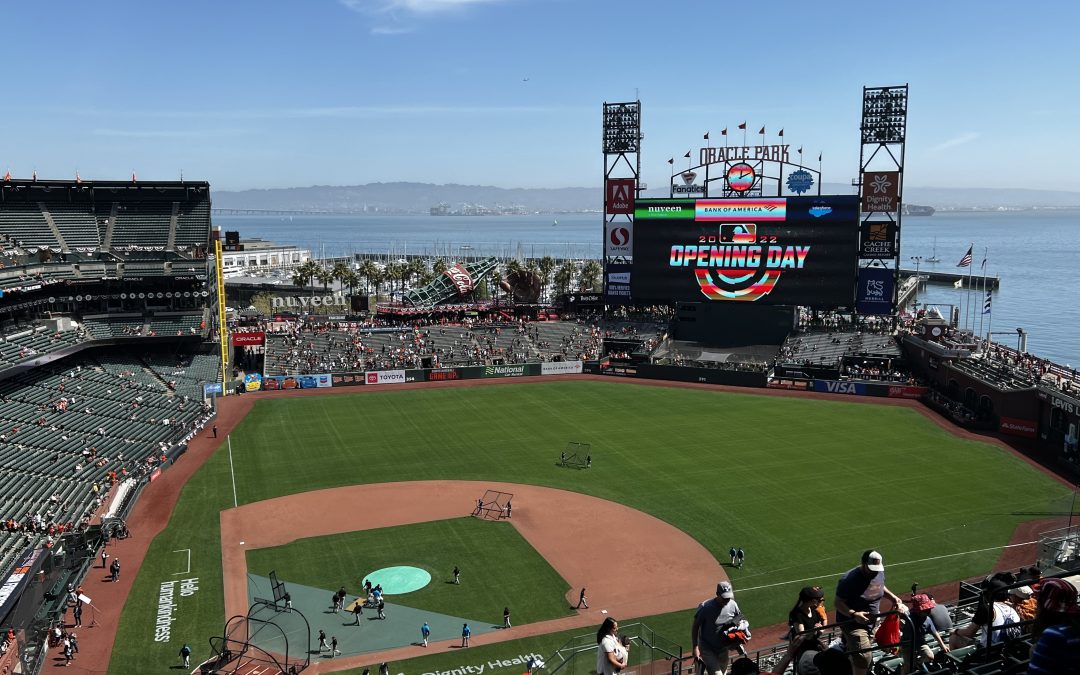 Well, it was a pretty unforgettable Opening Day. As we had our postgame dinner last night, MrLefty and I agreed that San Francisco feels “back” for the first time since the COVID-19 pandemic began. Lots of people walking dogs, scootering, and roller-blading along the Embarcadero. A packed restaurant on a Friday night, mostly full of 20- and 30-somethings. And a ballpark with a paid attendance of over 40,000, rocking, rolling, and roaring in support of their beloved San Francisco Giants.

We sat in Section 311 with my brother, sister, and brother-in-law. It was a gorgeous day, and as you can see from the photo above, the views were great. We had to bail on the TWG photo op after the game because the extra innings put us in a time crunch, but I was texting with Crawnik and said hi briefly to 12xu.

The Giants always throw quite a party for the home opener. Sometimes it’s very emotional, like the 2019 opener, which honored Willie McCovey and Peter Magowan, who had both passed away during the offseason. Yesterday, the most emotional moment was during the In Memoriam tribute to “Giants family” members who had passed in the previous year, when Michelle Kuiper’s photo came up. You could almost hear 40,000 hearts breaking for Duane and his kids in that moment. There was an audible sigh.

Mostly, though, it was fun stuff. They had fantastic singers for the Black National Anthem and the National  Anthem. They had five Navy parachuters drop right into the park. They had Ron Wotus raise the NL West championship banner. And they had Captain Brandon Belt ride in on a boat to throw out the ceremonial first pitch.

Belt had already made a stir when the lineups were announced and he was wearing the same makeshift “C” on his jersey that he first sported in Chicago last September. But no one, not even his teammates, knew about the boat thing. It was hilarious, and Belt, of course, milked it for all it was worth, saluting and tossing baseballs into the crowd. Greatest moment at a home opener since Madison Bumgarner entered on a horse in 2015.

And then there was the game, and this quote about sums it up:

“a good baseball season will make you feel joy, heartbreak, anger, jubilation, confusion, humor, sadness, peace, and excitement. The Giants managed to make you feel all of those things in one game.”

Logan Webb picked up right where he left off, despite slightly spraining his ankle on an awkward infield play. He went 6+ innings (85 pitches), five hits, one walk, three strikeouts, and one run (and that because Dom Leone came in and promptly served up a two-run homer with Webb’s final hitter on base). That is now 23 straight starts for Webb without taking a loss.

Fans gave Logan Webb a standing ovation after the Giants made a pitching change in the seventh 👏 pic.twitter.com/NYYjh9Tghs

Joey Bart had a very auspicious beginning to his real rookie year. (I’m not counting 2020 any more than I count Buster Posey’s cup of coffee in 2009.) Besides working well with Webb and handling six different relief pitchers, he scored the Giants’ first run of 2022 all the way from first. He also–big sigh of relief–hit his first major league homer, a no-doubter deep into the left field bleachers.

Several members of the bullpen (Tyler Rogers, John Brebbia, and Jose Alvarez) did a great job of cleaning up other people’s messes. Jake McGee had a drama-free 10-pitch eighth inning, and in hindsight, maybe he should have gotten the ninth, given the adrenaline of Opening Day. (To be fair to Gabe Kapler, though, McGee did blow the save last year on Opening Day in Seattle, so pick your poison.)

Finally,  hat-tip to new 3B coach Mark Hallberg, who was 2 for 2 in sending water buffaloes (Bart and Darin Ruf with the winning run) home from third.

There was a happy ending to it all, but it was hard not to notice that when they weren’t hitting solo homers (Bart, Belt, and Thairo Estrada) and getting RTIs, they weren’t hitting much (6 hits). They had the same number of walks as strikeouts (7), so they were grinding out ABs, and the Marlins have good pitching. But the overall lineup felt kind of anemic, odd as that is to say when they scored six runs and hit three homers.

There was a lot of sloppiness. Ruf got picked off second with two on and two out and Brandon Crawford up. Mike Yastrzemski got thrown out stealing on a 3-1 pitch to Belt, who, of course, walked on the next pitch. We’ll get to the worst base-running gaffe of all in the next section. The defense wasn’t great, either. Estrada made a couple of very athletic plays at second but also failed to turn two possible double plays and had a costly throwing error in the ninth. Wilmer Flores clanked a play at 3B and made a bad throw. Steven Duggar threw to the wrong base. Webb needs to stop trying to field everything and let his defense help him, though, after seeing Flores and Estrada in action, perhaps Webb can be excused for taking matters into his own hands. Leone did a poor job relieving Webb in the sixth inning, facing the minimum three batters (two-run homer, walk) before being yanked in favor of Rogers.

You could call all of the above “bad” items “ugly” as well, but I reserved the label for the two moments that almost cost the Giants the game. With a two-run lead, rookie closer Camilo Doval couldn’t command his fastball in the ninth and threw one slider too many, giving up a highly predictable three-run homer.

And then there was the bottom of the tenth inning. Be honest: when you heard that Mauricio Dubon was the Manfred “ghost” runner on second to start the inning, was your first thought “Oh good, Dubon’s fast” or “Oh god, hope he doesn’t do something boneheaded”? Raise both hands if you thought both things simultaneously. (I’d raise my hands except I’m typing this column.)

Dubon’s tenth-inning mistake was so, so, so bad.  Kapler had a charitable explanation for it, saying Dubon needs to gain confidence on the bases. We all know why because we’ve seen him run the bases before(!). Having been there, I’d say it seems accurate to say that Dubon was overthinking it. (Belt hit a shallow fly ball to right field, and Dubon couldn’t decide whether to tag up or stay put, so he got caught off second.)

Kapler can be as generous as he wants right now because he has a 28-man roster to play with through April, and Tommy La Stella and Evan Longoria won’t be back for awhile. But it’s  hard to see how they keep putting up with Dubon for much longer, and that’s sad to say because he’s a likable young man with a great story, and he does have upside as a player.

Estrada, after making a critical throwing error in the middle of Doval’s meltdown, took exactly two pitches in the bottom of the ninth to re-tie the game. It happened so fast that we hardly had time to start grumbling about the blown save.

ESTRADA TIES IT UP 😱 pic.twitter.com/QLNy9vbztp

When you enter the ballpark smirking on a boat with a makeshift “C” on your jersey, you’d better back it up, and Belt did. He had the first hit of the season for the Giants, a bunt down  the 3B line (and yes, we all remember what happened the last time he tried to bunt), and the third baseman threw the ball down the right field line, leading to Bart’s wild dash home all the way from first. Belt then scored on Ruf’s RBI single to right. Then he mashed a homer to right in the eighth inning, providing an insurance run.

Captain Belt held up the “C” after his dinger 😂 pic.twitter.com/qSCK2BZZd8

So there we were in the tenth with two outs and nobody on after Belt’s out/Dubon’s mistake, and MrLefty and I both agreeing that we HAD to take a bathroom break if the game kept going. But Ruf kept the inning alive by drawing a walk (on four pitches). And then a miracle happened. Austin Slater, who’s great against lefties but barely OK vs. righties, roped a ball all the way to the wall in left field–the Marlins were playing him to hit in the gaps–and Ruf motored home all the way from first, accompanied by an epic Duane Kuiper call.

How are you feeling, Darin?

Thanks so much to HaakAway and the Tevister for running this year’s contest to pick the Opening Day roster and, for the first time, the starting lineup. There were a lot of high scores because there weren’t many uncertainties. Out of a possible 38 points (28 for the roster and 10 for the starting lineup), two people tied with 37. Here is the list of everyone who got 35 or higher.

Thanks to everyone who played, and stay tuned for the next one, which involves picking minor leaguers to follow.

MrLefty and I will be back out at the park for Captain’s Hat Day. Lefty out.