Hail to the Buster 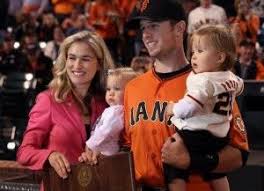 Buster and Kristen Posey have welcomed twins into their family once before, and it was under difficult circumstances. Kristen was six months along with Addison and Lee (born August, 2011), when Buster was seriously injured in a vicious home plate collision with Marlins’ outfielder Scott Cousins. I remember that Buster, even in severe pain, was concerned that his pregnant wife knew he was OK, with no head or neck injury. Buster spent the next few months undergoing multiple surgeries and hoping he’d able to walk by the time his babies arrived. Kristen spent the final stage of her pregnancy with twins waiting on her injured husband hand and foot.

But there was a silver lining. When Lee and Addison arrived, Buster, his season over in May, was there for the birth and full-time for the twins’ first months of life. If he hadn’t been injured, he would have needed to race home from a road trip for the delivery and would only have been entitled to three days of paternity leave.

Now here we are again. After years of trying to adopt, the Poseys are for the second time the new parents of twins. Ada and Libbi, identical twin girls, were born a week ago yesterday, and the Poseys finalized their adoption this week. The new babies were born six weeks premature and, though they’re doing well, will be in the NICU for some time. Because they will be medically fragile and vulnerable even after they can come home, Buster is exercising his option to sit out the 2020 season so that he isn’t exposing himself and his family to COVID-19 by being out and about. Andrew Baggarly wrote maybe two of his best sentences ever in an article about Buster’s decision last night.

And for the second time, Buster will be home with Kristen when their twin babies come home and in those precious, challenging early months. Another silver lining in the midst of all the uncertainty and grimness.

As Baggarly explained in his book about the 2010 Giants, A Band of Misfits, “Hail to the Buster” was the song fans at Florida State sang when he played college ball there. He was such a great college player that they renamed the Johnny Bench Award–for the best collegiate catcher each year–to the Buster Posey Award. The Giants have two new Buster Posey Award winners in their organization, top draft picks Joey Bart and Patrick Bailey. But there will only ever be one Buster.

Hail to the Buster. And the Kristen, too. Congratulations, good health, and much joy to the Posey family.

What now for the Giants?

Posey has been moved to the restricted list, meaning that his 40-man and 60-man spots on the Giants’ roster are open. Because Aramis Garcia is injured and likely out for most or all of this season, the Giants currently have zero (0) healthy catchers on their 40-man roster. In their camp, they have catchers Rob Brantly, Tyler Heineman, Chadwick Tromp, Joey Bart, and Patrick Bailey. Brantly and Heineman have 105 major league starts combined, and Tromp has not played above AAA yet. For reasons not entirely clear to me, they seem extremely unwilling to seriously consider opening the season with Bart on the major league roster.

It seems that are three options:

I myself am rooting for Option 1 because I really can’t see any good reason why not. But I guess the decision makers know what they’re doing. We shall see. (And no, Pablo Sandoval is not going to be an option. Stop it.)

I mean, who the heck knows? Beyond the blockBuster news, Brandon Belt is in a walking boot due to heel pain, so will he be available for Opening Day? Belt and Buster were in the Opening Day lineup in 2011 and have been in every Opening Day lineup since. In other circumstances, this would have been ten years in a row for both of them, which is quite a run of stability.

Gabe Kapler joined the broadcasters for this week’s version of Chalk Talk @ Home, and among other things, he said that the 30-man Opening Day active roster was likely to include 14-16 pitchers, so do with that what you will in making your lists for the contest. Remember that they’re due to HaakAway by Friday, July 17, either as a reply to one of his comments or via email (mysfgiantguy@gmail.com).

Pitcher names that sounded like sure things included Cueto, Samardzija, Gausman, Smyly, and Webb, along with Watson and Rogers. It sounds like Kapler and the front office are still sifting through a lot of other possibilities (see my post from a couple of weeks ago for a recap, though some things have changed since then). As for position players, it was noted this week that Billy Hamilton at some point was added to the 40-man roster–but he also hasn’t been in camp. So it’s hard to say whether he’ll be ready for the opener at Dodger Stadium on July 23. Same with Jarlin Garcia.

Kerry Crowley had an interesting article yesterday about how the Giants are having players work out at multiple positions so that they can prioritize versatility and flexibility in this strange and challenging season. Among other things, he mentioned that outfielder Joe McCarthy has been asked to work out at first base (to add a left-handed hitting backup to Belt). Other players taking on multiple positions in camp include Mauricio Dubon, Austin Slater, Mike Yastrzemski, and Darin Ruf–pretty much everyone but Evan Longoria and Brandon Crawford. Now, this doesn’t mean that all of those guys will make the Opening Day team, but even taxi squad guys need to be ready to come up and contribute in various ways.

Will there actually be a 2020 season?

Optimism seems to be growing, at least in Giants camp, that there will be. Discussing Posey’s decision to opt out, Farhan Zaidi said he didn’t anticipate any other players doing so, and that he sensed increasing confidence among the players that the team could keep them safe. No other Giants players have tested positive for COVID since arriving in camp. On the latest “Baggs and Brisbee” podcast, Andrew Baggarly, who’s been at the ballpark every day since workouts began, said that now that he’s seen what the protocols are and how careful everyone is being, he’s feeling more optimistic that the plan could actually work. As has always been true, though, the chain is only as strong as its weakest link, meaning specifically players who get bored or annoyed with being cooped up when they’re not at the ballpark, venture out, and perhaps expose themselves and their teammates to the virus.

If there is a season, DrLefty will be in attendance at every home game, sitting in the Tim Lincecum section (my seat, to be precise, is LB129, row 18, seat 11, five rows behind The Freak himself). Thanks to SisterLefty for the early birthday gift! Here’s the photo we submitted for the cutout so you can look for me on TV!

Hope you all have a great Saturday. Stay well and safe. Lefty out.