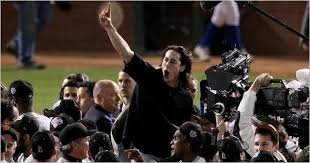 Ten years ago today, November 1, 2010, was a Monday, the day before Election Day. The Giants were in Arlington, Texas, getting ready to play Game 5 of the World Series. Thanks to a spectacular World Series debut on Halloween night by 21-year-old rookie starter Madison Bumgarner, the Giants had a commanding 3-1 lead in the series, with their ace, Tim Lincecum, ready for his rematch with Texas ace Cliff Lee.

Tim Lincecum, wearing his signature bow tie, before his start on November 1, 2010.

What do you remember about that day? What were you doing? What were you thinking? Luckily for me, I have Facebook memories to jog my own recollections.

Various Facebook friends replied that they kind of hoped the series went to Game 6 so that the Giants could celebrate at home at AT & T Park. Not me–I remembered 2002 and wanted it over and done with. And, with no disrespect to presumed Game 6 starter Matt Cain, I wanted it to be Timmy on the mound when the deed finally got done. (Don’t worry, Matt. Your moment is coming in 2012. There’s room for you, Timmy, and MadBum on this 3-in-5 trophy train.)

The Game 1 face-off between Lee and Lincecum, while it ended well for the Giants, had been kind of an underwhelming mess as to the starting pitchers. Lincecum was jittery and quickly got the Giants into a 2-0 hole. Lee at the time was regarded as maybe the best postseason pitcher in the game, so an early deficit seemed ominous, but luckily it was not his night, and he didn’t make it out of the fifth inning, giving up six earned runs. Timmy wasn’t that much better, going 5.2 innings and giving up four runs.

Game 5, though, was the ace vs. ace battle we all expected. Both pitchers were dominant. The game crawled to the seventh inning, still a scoreless tie. You absolutely felt that the team that scored first would win the game. We wouldn’t see another Giants playoff game quite like it until Madison Bumgarner and Noah Syndergaard put up dueling zeros until the ninth inning of the 2016 Wild Card game. That one ended happily, too. (“Conor, I appreciate the hell out of that.”)

In the top of the seventh inning, the Giants finally got to Cliff Lee. A leadoff single by October hero Cody Ross. Another by Juan Uribe. The first and only sacrifice bunt of Aubrey Huff’s career. And then a lengthy at-bat by Pat Burrell, ending in a swinging strike 3 on a 3-2 pitch. As Burrell walked away, shaking his head, you could see him ask the umpire, “Strike”? and the umpire nodding.

Burrell didn’t have a good World Series, and I know in the moment he and others felt he let the team down. But I think he wore Cliff Lee down juuuuuuust enough that on a 2-0 pitch, he made the mistake to Edgar Renteria that would change Giants history.

Renteria took a cutter and a change-up, both just missing the zone. He knew that Lee, behind in the count, wouldn’t throw him a curve. He tapped his front foot, stood in his familiar, closed stance, and waited for another cutter.

Do you remember where you were and what you did when Renteria hit that homer? I do. I screamed so loudly that the late great Winnie the Pooch made her rapid exit to the back bedroom (she didn’t like loud noises and had a tough life, as the Giants and Warriors won three championships, and the 49ers were in the 2013 Super Bowl in her lifetime). MrLefty said “Sheeeeesh, [Lefty], don’t have a heart attack.” I knew it was over, though. 2002 notwithstanding, the way Timmy was pitching, I knew it was over. I knew I was finally going to see the first Giants championship of my lifetime, the first one since they moved to San Francisco.

Do you remember how you felt when Brian Wilson got Nelson Cruz swinging for that final out in the bottom of the ninth? Did you scream? Did you high-five someone? Did you cry?

I did all of those things. And then three days later, MrLefty and I went to the parade. It was a gorgeous fall day, just like it is here today.

Here’s a link to the whole game if you want to watch it in honor of the day and don’t feel like digging out your DVDs.

The pandemic has taken a lot away from us this year. One thing it took was the chance for the 2010 team to have its ten-year reunion on the field at Oracle Park (sans the previously uninvited Aubrey Huff). But it can’t take away our memories of what happened ten years ago today, the day Christmas and our birthdays came early, the day that changed everything for this generation of Giants fans. Happy Anniversary!

I was going to do a dive into free agency possibilities for the 2021 Giants, but there’s time for that, and I decided instead to just let today’s anniversary stand alone. But I can’t sign off without reminding you of our friendly contest. Here are the details again.

To enter, send HaakAway your answers by midnight on November 3. You can either reply to a HaakAway comment or email him at mysfgiantguy@gmail.com. It’s a short deadline because, as outlined above, things may start happening quickly.

Have a lovely Sunday, go Niners, and take a few minutes to remember…and smile. Lefty out.