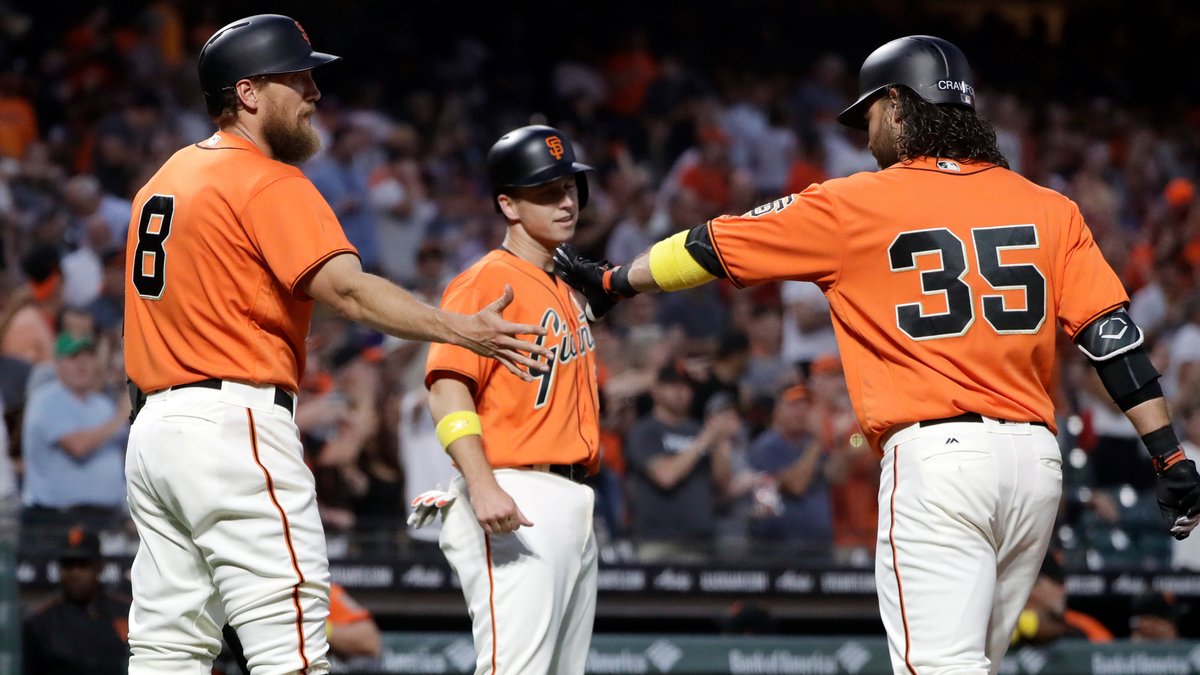 This is my third year of doing a Happy FanFest Day post, and as I did last year, I spent time reading over my previous efforts before starting today’s post.  You can see 2018 here and 2019 here.

My sense is that Media Day this year was somewhere between the hopefulness of 2018 and the sullenness of 2019. A big reason for the improved energy happened first thing yesterday, when the news leaked out that Hunter Pence (yeah, the same one) was on his way to San Francisco to take a physical and sign a new contract with the Giants.  Apparently the story was broken by a baseball fan who overheard Pence on his cell phone in the gate area at the airport, and he let this reporter know.

Heard this: Hunter Pence is on his way to San Francisco for a physical. If he passes, he’s joining the Giants. He turned down offers from Padres and Astros.

By the end of the day, it was a done deal–major league contract, $3 million base plus over $2 million of incentives–and Pence made a surprise appearance at the annual Town Hall event held for season ticket holders, delighting the fans.

"There's nothing I want more than to give back everything that I've learned, all that I have, and everything I have left." —@hunterpence #SFGiants pic.twitter.com/XCDIAAGQH3

It’s easy to be cynical and speculate that the addition of Pence, together with the re-signing of Pablo Sandoval last week, were cheap and transparent attempts to cheer up a disgruntled fan base. And I’m sure that the popularity of both guys with Giants fans didn’t hurt. It’s also true that Pablo and Pence are both upbeat, positive, hardworking guys who will be good role models to support the culture that new manager Gabe Kapler and his coaching staff will be trying to build. But let’s not overthink this. Farhan Zaidi is not a sentimental type, and these were baseball decisions. Pence and Sandoval both had good 2019 seasons, even though they were cut short by injuries. Between them, they hit 32 homers in 582 plate appearances, and that alone replaces the power they got from Kevin Pillar (21 homers in 645 PAs)–and that’s before we add in Wilmer Flores (we’ll get to him).

It was easy to see how Sandoval could fit the 2020 roster. He’s a switch-hitter who seemed to finally re-locate his right-handed power in 2019, he’s a great pinch-hitter, and he can back up either Longoria at third or Belt at first. Farhan Zaidi said at Media Day yesterday that Pablo is doing well in his rehab from Tommy John surgery and that they expect him to be able to hit but not play the field during spring training, with his ETA to full baseball action perhaps a month after Opening Day. In any event, Sandoval is back on a minor league deal, so there’s no rush to make any decisions about him and no one for him to block at the moment.

The Pence signing is a little different. He was given a major league deal, so he’ll be expected to be on the roster. But he’s too old (37 in April) and too injury-prone these days to play everyday in the outfield. The right-handed power is useful in a group that is heavily left-handed (Mike Yastrzemski, Alex Dickerson, Steven Duggar, Chris Shaw). Since Dickerson is also injury-prone, that may be the natural platoon in left field. Let’s assume Yaz will mostly play right field (where he was sneaky good defensively last year, according to Fangraphs). (Yaz has a bobblehead day on the calendar, so we know he’s making the team.)

Where does that leave everyone else? Let’s say the Giants will have five outfielders on their 26-man roster, and let’s say three of them are Pence, Dickerson, and Yaz. They just signed speedster/CF defensive whiz Billy Hamilton to a minor league deal, which can’t be great news for Steven Duggar. (By the way, Hamilton’s career OBP is better than Kevin Pillar’s, and he’s much better defensively.) So we have Hamilton, Duggar, Shaw, Austin Slater, and Jaylin Davis competing for…two spots?  Or maybe not, because what about Mauricio Dubon?  With that segue, let’s move on to…

The first multi-year deal of the Zaidi Era

OK, the second multi-year deal. The first one was given to Mike Krukow, who signed a two-year contract extension after the 2019 season to continue as a TV analyst on Giants games. As Krukow and his longtime partner and dear friend Duane Kuiper announced yesterday, they’ll be doing something new this year. Because of Krukow’s degenerative muscle condition, he can no longer manage road trips with the team. He’ll be in the booth with Kuiper for all 81 home games at Oracle Park, but for road games at Dodger Stadium, San Diego, and Arizona, he’ll be in the NBCS-Bay Area studio in San Francisco, doing a remote “SplitKast.” Kruke and Kuip demonstrated how this would work in their live announcement yesterday.

Kruk and Kuip will be coming to you in an all new experience for 22 road games this season 👏 pic.twitter.com/ecH8r3MU0I

I for one think this is super cool and I’m happy the Giants made it possible. Krukow and Kuiper are a great team, and we want as much of them as we can get for as long as it is possible. Krukow is 68 and Kuiper is 69, so we know this isn’t going to last forever. We should savor it. In the meantime, younger broadcasters Javi Lopez and Shawn Estes will work the other road games with Kuiper (and Jon Miller, in some cases).

The other multi-year deal, which I was surprised to see was the first ever handed out by Zaidi since he came to the Giants, was to infielder Wilmer Flores. Flores was signed to a two-year, $6 million deal with a third-year team option. At 28, and coming cheaply, he’s a reasonable option for a rebuilding team. Flores bats right-handed and is a league-average hitter with 77 homers as a major leaguer. Now none of that is all that exciting, but on a team with a lot of glove-first/no-pop infielders, he’s an offensive upgrade. His addition also makes the infield picture a bit crowded and in particular makes the role of Dubon a little murky. Besides incumbents Belt, Crawford, and Longoria, there is Flores, Dubon, and 2019 AL Gold Glover at 2B, Yolmer Sanchez, whom the Giants signed last week to a minor league deal, which he signed on the hopes of playing 2B everyday (oh, snap). Oh, and in due time, there’s Pablo Sandoval. I’m not sure where all this leaves utility infielder Donovan Solano or other younger guys (Kean Wong, who’s on the 40-man roster, and non-roster invitees Cristhian Adames, Darin Ruf, and Zach Green).

So it’s been a pretty eventful week, as things go in Giants Nation. I heard something about some blockbuster deal down south, but I’m just not worrying about that right now. Oh, and it appears that with the additions of Pence and Hamilton, the Giants are no longer pursuing Yasiel Puig. So you can either sigh with relief or disappointment about now.

The event runs from 10 a.m.-3 p.m. today at Oracle Park. All of the interviews can be heard live on KNBR. Here’s the list of Giants’ players, coaches, and broadcasters scheduled to attend, with one last-minute addition (Pence).

Here's the list of #SFGiants players, executives and broadcasters expected to participate at FanFest on Saturday at Oracle Park. pic.twitter.com/QDFt1yuVxg

Last year NBCS-Bay Area also live-streamed the FanFest interviews, but I can’t find any information that they’re doing so this year.  It’s still fun to listen to them on the radio, though.

Despite my low expectations for the Giants in the coming season, I still can’t help being a little excited that today has come and that baseball is back. The long winter is almost over!  Lefty out.