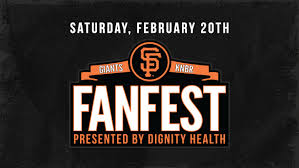 I have only attended the Giants’ annual Fanfest twice. Once was back in 2003, when it was still in a warehouse adjacent to the parking lot. The other was in 2007, the first year they actually held it inside the park.

The 2003 one was a blast. It was on a Saturday in the middle of the season–we stayed on to attend a night game. MrLefty and both the LeftyJrs auditioned for an opportunity to sing the National Anthem. (They’re all really good singers.) Only our younger daughter made it past the first round, but it was really fun. I entered every raffle and won a $500 Chevron gas card. And we bought this painting of the park (below) during the 2002 World Series. They were selling it for a $100 donation to the Giants Community Fund, and Thomas Kinkade was there in person autographing them. They only sold 100 of them. The painting is above my computer in my home office, looking down on me while I type this column.

After Kinkade passed away suddenly a few years back, a lot of his paintings shot up in value. This one lists online for about $1600, but I’m not interested in selling mine. I’m not in general a huge fan of his style, but I think this one is beautiful. Anyway, it was a very productive–and lucrative–day with the family!

The 2007 event ended my interest in ever going to another Fanfest. It was PACKED. You could hardly move. I don’t think they anticipated how many people would come once they started hosting it in the park, and it was just crazy. Reminded me of my final trip to Disneyland in January 2017, and not in a good way.

Even so, I always eagerly anticipate Fanfest week. The players start trickling into San Francisco and some do shoots for that year’s commercials. They have Media Day on Friday and a Town Hall event on Friday night with season ticket holders that is usually streamed live on the Giants’ website and broadcast later on NBCS-BA. And on Saturday, you can turn on KNBR for the day or watch interviews streamed on the website. Baseball is back, there’s news and quotes and storylines, and camps are just days from opening in Arizona. It’s an early February post-Super Bowl rite of passage.

It’s all different this year. The team is already in Arizona, pitchers and catchers have reported, and position players are due in tomorrow. There was no Media Day, no Town Hall, no event at our beautiful ballpark. But there was a virtual Fanfest. KNBR had interviews with players, coaches, and executives all week, and yesterday, the KNBR hosts interviewed all kinds of people all day long–from Marty Lurie interviewing Mario Alioto about marketing issues (biggest tidbit: The Will Clark #22 retirement ceremony is pushed back to 2022 so that it can be a packed house for him), to Greg Papa apparently “meeting” Farhan Zaidi for the first time (not sure how that is possible, but I guess it is true), to Buster Posey further elaborating on how he fired rolled up diapers at his son Lee “to get my throwing arm in shape.” As Buster explained it, Lee hasn’t been interested in taking a turn on the diaper-changing brigade since the family added newborn twin girls last summer.

It’s all different, but it’s February, baseball is here, and that’s a beautiful thing. So what have we learned about the 2021 Giants over the past week?

Well, OK–deeper, if not exactly “deep.” (See Los Angeles Dodgers for a “deep” rotation in which last year’s Opening Day starter Dustin May is not even in the top five.) But the Giants did add several key depth pieces to their staff this week, most notably Aaron Sanchez (whose signing was just today made official). They also signed Nick Tropeano and Shun Yamaguchi to minor league deals. Along with the previous offseason additions (Gausman, DeSclafani, and Alex Wood), that’s now a legitimate list of “bulk innings” options with actual major league credentials. It potentially allows them to send Logan Webb to AAA for awhile if that seems like the best option (pun noted) for him, and it means they don’t have to count on a rehabbing Tyler Beede until he’s good and ready.

It’s an intriguing group of arms, more of a high-risk/high-reward mix than we’ve usually had lately. A number of them have had health issues, but when they’ve been good, they’ve been really good. Let’s cherry-pick a few stats, shall we?

You don’t have to squint too hard to see the potential. With the exception of Sanchez, whose last really good year was 2016 and who spent 2020 recovering from a shoulder injury, all of these pitchers had good-to-great years in either 2019 or 2020. However, I am cherry-picking. Some of these guys had really bad 2020 seasons (DeSclafani and Yamaguchi in particular; even Alex Wood had a bad regular season before a great postseason). Disco explained that he signed with the Giants in part because of their reputation over the past couple years of righting pitchers’ ships (Pomeranz, Gausman, Smyly). Alex Wood has also said that he almost signed with the Giants before 2020 because he likes their analytic approach.

One finding from the analytics is that the Giants’ pitching coaches want more change-ups. Andrew Baggarly, in his latest piece for The Athletic, mentioned Webb, Wood, Disco, and Johnny Cueto as guys who are being encouraged to throw more change-ups. Baggs took a particularly deep dive into Cueto’s largely unsuccessful 2020 season–except when he was throwing his change-up (threw it 27% of the time and opponents hit .125 against it).

It will be very interesting to watch things unfold with both the rotation and the bullpen. The Giants should be feeling pretty good about their position players right now, coming off a successful season as to offense. As the pitching staff goes, so will go the 2021 Giants, or so it would seem.

As we’d speculated, the Mariners are starting a lefty on Opening Day, though it will not be the recently signed James Paxton. So we can have fun guessing the lineup and who #14 in the list of “Opening Day left fielders since Barry Bonds” might be.

Left-hander Marco Gonzales could keep one of the more famous #SFGiants streaks alive.

With Alex Dickerson unlikely to face a lefty, the Giants could have their 14th different Opening Day left fielder in a row since Barry Bonds last started. https://t.co/z75B1mUxpf

So…cross Gott off your early ballots, I guess. I believe HaakAway has set March 18 as the deadline for ballots, a week before Opening Day. We’ll send more reminders as we get closer to it.

Barring injuries, it doesn’t appear that there are too many decisions to be made, outside of perhaps a couple of bullpen spots. I do wonder, though, about the lack of a true backup shortstop and the murky state of centerfield. Mauricio Dubon can’t be both the everyday CF and the backup SS, can he? Or should he? It’s worth mentioning that Jackie Bradley Jr. is still on the market, and one article from just a couple days ago named the Giants as one of three teams who really should consider signing him.

Should be lots more news this week as position players report and they get ready for the first Cactus League game, a week from today(!). Enjoy it all–I know I will. Lefty out.