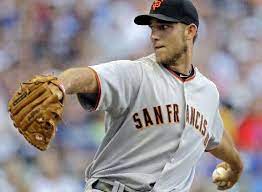 Why is there a picture of a very young Madison Bumgarner at the top of this post? Because Halloween is the anniversary of one of the coolest ever San Francisco Giants memories, non-trophy category. On Sunday, October 31, 2010, 21-year-old rookie Madison Bumgarner made his first World Series start. All he did was shut out the Texas Rangers, on the road, for eight innings on three hits, to give the Giants a commanding 3-1 lead in the series. All of that is amazing enough, but also consider that the Rangers had a bunch of sluggers like Nelson Cruz, Vladimir Guerrero, and AL MVP Josh Hamilton and that they’d been eating lefties for lunch that whole postseason. In fact, they’d beaten up on Jonathan Sanchez the night before in Game 3, the only game the Rangers won in that World Series.

That game also featured the first World Series homer by another rookie, 23-year-old catcher Buster Posey. He and Bumgarner had been a matched set since playing together on the San Jose Giants in 2009, a season that culminated with both making their major league debuts in September. Posey and Bumgarner, for different reasons, began the 2010 season in AAA Fresno. Posey was called up in late May, and Bumgarner in June. At that point, Posey was playing first base most of the time, with veteran catcher Bengie Molina handling most of the catching duties. The one guy Posey did get to catch in that brief period?–Bumgarner, his minor league buddy.

By October, Molina was playing for the Rangers, and by the last day of October, a rookie battery whose ages added up to just 44 had led the Giants to just one win from their first World Series title in San Francisco. I love the way Andrew Baggarly described this in his book on the 2010 Giants, A Band of Misfits:

Just a few months earlier, Posey and Bumgarner were down Highway 99 in Fresno, representing the far-off future of the Giants organization. But after they led the Giants to a Game 4 victory on Halloween night, the future was now. Boy, was it ever.

You couldn’t count on rookies like Posey and Bumgarner to understand this context…They’d never played amid the blowing hot dog wrappers at chilly Candlestick Park. They had no idea how many times Giants fans had had their hearts broken.

“I have a lump in my throat,” Sabean said. “I can’t even talk, that was so amazing.”

We had no idea, of course, that this game was only the start of Bumgarner’s transcendent World Series career, but it was so cool just in the moment that I will never forget watching that game. The trick-or-treaters were lucky we even answered the door.

Depending on how things go tonight, it could be a memorable Halloween for the Braves and their fans. I wouldn’t have predicted four weeks ago that the Braves would be on the verge of putting an early end to the World Series, but here they are, up 3-1 and with the chance to close it out at home tonight. It’s been a strange postseason, with three 100-win teams exiting the tournament early and the role of the “starting pitcher” having devolved into something of an afterthought. So before it ends, let’s see how our old friends are doing.

Former Giants on the Braves: There are quite a few, and that’s not even counting Eddie Rosario, who’s a sorta honorary former Giant because he was traded to the Braves in July for Pablo Sandoval. Still on the Braves: Ehire Adrianza, Adam Duvall, Drew Smyly, and Will Smith. With the team but not on the roster (injured) is also former backup catcher Stephen Vogt. How are these #ForeverGiants doing?

Former Giants on the Astros: Manager Dusty Baker, and that’s it. Giants fans are divided about Baker’s 10-year history as manager of the Giants, which was bookended by two of the most painful losses in San Francisco Giants history: the final game of the 1993 season, a loss at Dodger Stadium that knocked the 103-win Giants out of playoff contention, and Game 6 of the 2002 World Series. Nonetheless, it was an exciting and fun era of Giants baseball, and Baker was the likable face of it (in contrast with the less likable face of Barry Bonds). Baker, now 72 years old, has not been back to the World Series since that 2002 heartbreak. The Giants were the first of five different teams that he’s led to division titles (Giants, Cubs, Reds, Nationals, Astros), and if the Astros hire him back, he’ll pass 2000 wins as a manager. It should be enough for a Hall of Fame nod, but it’s hard not to root for Dusty to finally get that ring. It’s not looking very good for him as of today, but it ain’t over yet (just ask the 2016 Indians/Guardians and Cubs).

With the World Series almost over, the clock is ticking on those Hot Stove picks. Here’s HaakAway’s description of the categories: That last one, the Rule 5 list, is daunting, but here are some hints. As HaakAway says, probably picking 3-4 of these guys is the most reasonable approach. You’ll see a lot of names that the Giants wouldn’t want to lose, but remember several things: (a) there is not unlimited space on the 40-man roster; (b) anyone selected in the Rule 5 Draft has to stay on the claiming team’s 26-man roster the whole season or be offered back to their original team–so guys from the low minors are less likely to be picked; and (c) the current wisdom is that pitchers can move up the ranks quickly but hitters cannot. So if you’re picking a lower minors guy, it’s likely to be a pitcher and not a position player. I sent my own ballot to HaakAway via email and I couldn’t whittle it down to fewer than five. I had two position players (one is fairly obvious–OK, it’s Ramos) and three pitchers.

To enter the contest, either reply to a HaakAway post OR email him at MySFGiantGuy@gmail.com by the end of the day on Tuesday, November 2. Thanks as always to HaakAway for running these fun competitions.

OK, stay safe in all of your crazy Halloween revelry today, maybe dial up the video of that amazing 2010 game, and smile. And who knows–maybe there will be a new champion before the day ends. Lefty out.