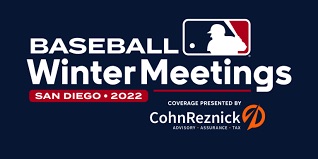 Well, folks, by the time I write next week’s column, the 2022 Baseball Winter Meetings will have come and gone. These next seven days have the potential to be insanely exciting for Giants fans or brutally disappointing.

The MLB Winter Meetings will be held December 4-7 in San Diego. This is the first time since 2019 that there will be normal, in-person meetings.

3. Who will the Giants lose in the Rule 5 Draft?  The Rule 5 Draft, back after a year’s hiatus during the lockout, will be held on Wednesday at 2 p.m. our time and will be streamed live on MLB.com. The Giants have some major names left unprotected, including 2019 first-rounders Hunter Bishop and Will Wilson, Cuban outfielder Jairo Pomares, and a long list of others, A MLB.com story on the draft named Pomares as the most likely Giant to be snagged, but I think it would be surprising to lose a High A outfielder. My money (if I were betting, which I am not) is on Nick Avila, the AA reliever whom I had on my HotStoveGuy™ ballot to be protected.

The Question We Really Care About

Will the Giants make a major move(s)–free agent or trade–during the Winter Meetings?

All indications are that yes, they will, but after the first four Farhan Zaidi offseasons, I have trust issues. After the news broke yesterday of Jacob DeGrom’s monster contract with the Texas Rangers, TotalFan62 said this:

We should consider giving that deal to Rodon. Zaidi has to maneuver in the marketplace and get us what we need. Very uneasy feeling regarding our inaction, that I think will be shared by DrLefty tomorrow.

Or here’s another way to put it.

The Giants claimed right-hander Miguel Yajure off waivers from the Pirates.

*hello to the 'announce Judge' people, hope you're having a nice Friday

I’ll get back to DeGrom’s contract in a minute, but my answer is that no, as of today, I’m not uneasy about the Giants’ inaction–but ask me again a week from today. I’d say that throwing nearly $20 mil at Joc Pederson was “action,” and certainly hosting Aaron Judge for two days before Thanksgiving was. I’m guessing that all of their attention for the moment is on that big hulking outfielder.

So let’s talk about Aaron Judge one more time, with the awareness that anything I say this morning could be made moot/ridiculous within days, if not hours. I think it’s clear that the Giants do have a chance in this competition. I think that if Judge absolutely, positively wants to go back to the Bronx and finish his career in pinstripes, we’d know that by now. The Yankees have purportedly offered him in the neighborhood of $300 mil/8 years, and you’d assume they’d go even higher if they had to. So who knows what kind of offer the Giants will make or what Judge is thinking, but I’ll throw this out here just for fun. On November 19, someone named The Ghost of Bay Area Bob tweeted this.

NEWS: I have it on good authority that Aaron Judge will be checking into the St Regis hotel in San Francisco on Monday where the Giants will meet with him and make their pitch

I saw this tweet at the time and thought what you’re thinking: who the hell is “The Ghost of Bay Area Bob”? Then, of course, two days later, Judge indeed checked into the St. Regis as scheduled to meet with the Giants. When I saw the video of Judge in the hotel, I thought about that tweet.

Breaking news into @MLBNetwork, via video from San Francisco: Aaron Judge has arrived in the city and is expected to meet with the #SFGiants this week. Join us on #MLBNHotStove at 9 am ET tomorrow for the latest. @MLB pic.twitter.com/pq0at6kgQ6

Why am I bringing this up? Because last night, ol’ Bay Area Bob tweeted this:

NEWS: I have it on good authority from multiple sources that Aaron Judge was in San Francisco today. That much is confirmed.

Why? Great question. I will not speculate. Let your imaginations run wild.

Then there’s the possibly relevant detail that Judge removed “New York” from his Instagram bio a couple of days ago.

On the same Giants Talk podcast, Alex and Cole speculated that Judge (and maybe other big name free agents) might actually sign deals before the Winter Meetings so that their new teams would know what kind of money they were working with to build a team around their new acquisition. In fact, Judge himself suggested that he might sign sooner, rather than later, for exactly that reason. Unless the Dodgers or another mystery team is about to swoop in, Judge’s options seem clear, and it seems likely that there will be an announcement about his new contract before the Winter Meetings end.

How the Free Agent Market is Shaping Up

The Jacob DeGrom deal is fascinating for what it says both about the free agent market this year and about DeGrom’s willingness to leave the Mets, with whom he’s played his entire career. The Mets wanted to keep him, but DeGrom still left. Had he had enough of the New York fans and media? He left a playoff team to join one that lost 102 games in 2022, and even Bruce Bochy can’t fix that overnight. Obviously, DeGrom and Judge are two different individuals, and what one does isn’t indicative of what the other will do, but it’s a good reminder that homegrown stars can and do leave their original teams in free agency (Albert Pujols, Madison Bumgarner, Cory Seager, etc., etc.).

I’ve always loved DeGrom, going back to the Mets’ 2015 run to the World Series. But I never wanted the Giants to sign him in this round of free agency. Remember when the Nats signed Stephen Strasburg to a seven-year extension after he was their World Series MVP in 2019? I thought that was nuts at the time, and guess what–it WAS nuts. I’m happy that the Rangers are trying to give Bochy some talent to work with, but I’m calling it now–this DeGrom contract ain’t gonna work out well.

So, back to TotalFan62’s question. I’m not necessarily “uneasy” that the Giants have don’t much yet, but I’m really nervous about DeGrom getting that much money, and I might be even more nervous about Zach Eflin (who finished the 2022 season in the Phillies’ bullpen) getting $40 mil for three years and even Matt Boyd getting $10 mil to return to the Tigers after barely pitching at all in 2022. It suggests that the market for starting pitchers is really on fire (or out of whack, depending how you look at things) and that it will be easier said than done to either bring Carlos Rodón back or replace him in the rotation. Or how about a 36-year-old middle reliever getting $17.5 mil?

Chris Martin was one of my favorite offseason bullpen targets, so this makes me yellow. https://t.co/ZD3fM2kZ1S

To wrap up this discussion, I’m meandering a bit because I really have no idea how this is going to go or even how I feel about it. If the Giants do get Judge, I’ll be excited about that, but if they don’t, I might be a little relieved–you could argue that a 8-9 year deal for 31-year-old Judge doesn’t make much more sense than a 5-6 year deal for DeGrom. And I could see the Giants pivoting to several other good free agents and spreading their money around and having a good outcome.

I’ll just be happy if the Giants finally do something of substance in a Farhan Zaidi offseason, and no, I don’t mean a deal with Rodón that turned out to be for just one year, and I certainly don’t mean an ill-fated three-year contract for Tommy La Stella. In an article about all this in The Athletic this week, a commenter referred to Zaidi as “Farhan the Meek.” I chuckled/winced, but–until proven otherwise, I think that’s fair. We will see over the next seven days if any of that changes. At least I think we will. Lefty out.