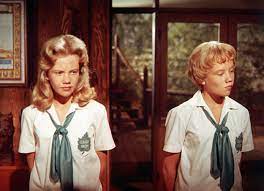 In honor of identical twin brothers Tyler and Taylor Rogers, MrLefty suggested that my lead-in could be from The Parent Trap, in which identical twins (originally played by Hayley Mills and then by Lindsay Lohan in the remake) are reunited through fate and circumstance and then conspire to get their estranged parents back together.

Alex Pavlovic broke the news that Taylor’s deal was official with this Tweet*.

*In case you missed the joke, that’s Tyler in the photo. We can expect nonstop Rogers Twins shenanigans, it appears. Taylor had a “meet the press” Zoom meeting yesterday that was crashed by Tyler (posing as a reporter named Brennan Huff, who was Will Ferrell’s character in Stepbrothers).

Tyler Rogers (alias Brennan Huff) crashed his brother Taylor's introductory Zoom call and asked, "Is it safe to say the the Giants have the best-looking bullpen in the National League West?"

Another fan of the Taylor Rogers addition was Jalynne Crawford, who is herself an identical twin.

I know Taylor and Tyler Rogers dreamed of this happening!! Twin power!!!! 🙌🏼 It was a dream of ours @Jdantzscher2 to compete at @uclagymnastics together!! This is the BEST day for @SFGiants and their families!!!

I think we all understood that Farhan Zaidi and the Giants’ front office couldn’t say much about the Carlos Correa situation while he is still a free agent. Well…as of this minute, Correa is still a free agent, but Zaidi decided, ten days after the Correa press conference was “postponed” (forever, as it turns out), to speak to the beat writers. Here’s a summary of his points:

You can read the full reports here of Zaidi’s press conference by Maria Guardado (mlb.com), Susan Slusser, and Andrew Baggarly. Baggs threw in as a parenthetical that Michael Conforto has already passed his physical. They’re just finalizing administrative details of his contract, and it will be announced in a few days. (Were you worried? I don’t mind admitting that I was, a little bit. Too soon.)

Giants fans have had an emotional couple of weeks, and there is a range of strongly held opinions about what has (not) happened this offseason. Greek Giant covered it pretty thoroughly in his posts this week. I think it’s time that we all move on. Stuff happened. Stuff didn’t happen. We may (not) like it, and we can’t change it. So as the twins sang in the movie, “let’s get together” and think about 2023–as it is, not as we hoped it could be.

Arguments for “worse” include “Well, they lost their best player” (pitcher Carlos Rodón, who led the team with 5.4 bWAR and is now a Yankee) and “longtime mainstays Evan Longoria and Brandon Belt are gone” (in fact, congrats to Longo, who signed a one-year deal with the Diamondbacks yesterday). Arguments for “better” include the addition of six new free agents, five of whom have previously been All-Stars (all except Sean Manaea), and the hope that two top prospects, Kyle Harrison and Casey Schmitt, could contribute to the 2023 team. Arguments for “about the same” include “they didn’t sign a middle-of-the-order star”; “they didn’t add any elite defenders”; and “Belt and Longoria were also former All-Stars, but they were too injured to stay on the field and contribute much, and the new guys have those histories, too.”

With this in mind, let’s take a shot at comparing what was (the 2022 team) and what could be (the 2023 team). This exercise may make us feel better or worse or it may make us shrug or shake our heads in confusion.

For this exercise, I’m going to go by position group and use Fangraphs stats. For 2022, I’ll use actual stats. For 2023, I’ll use current projections. To keep it simple, I’m just going by overall WAR, not breaking it down between offense and defense.

Of course, the two important caveats to all this are (a) the 2022 numbers include a lot of players who will not be involved in those composite WARs for 2023. For example, the CF WAR may look stronger for last year because Mauricio Dubon and Steven Duggar, both good defenders, played a bit there earlier in the season, while the projections for 2023 only include Yaz and Slater. In contrast, a lot of really terrible “left fielders” manned that position in 2022, and they’re gone, too.

The other caveat, of course, is (b) the projections are just trying to predict a future that hasn’t happened yet. These numbers could be better. They could also be worse. They also will certainly include other names besides the ones in the final column. We just don’t know who they are yet. [Apologies for the weird spacing below the chart. I played with it for a long time and this was the best I could get it. Not a Word Press expert.] OK, so what can we learn from this chart? Here are the biggest differences that jump out to me:

So if you are not sure about the better/worse/about the same question, there’s a good reason why. Depending upon which position group you’re talking about, it could be any of those choices.

Based on this comparison, I guess it’s fair to say that if you’re in the “Zaidi hasn’t done a good job this offseason” camp, there are arguments to support that. It’s hard to argue, on paper, that the team will be much better next year than it was last year. It’s also fair to say that if you’re in the “Zaidi’s done well enough, all things considered” camp, you also have some arguments to support that. These free agent additions aren’t likely to make the team worse, and they may also add to team depth and to the stability and chemistry in the clubhouse that was absent in 2022 with the record-breaking churning. So–“great?” Not really. “Horrible?” Not really that, either.

We’ll let Hayley and Hayley take us out this time. Happy New Year! Lefty out.