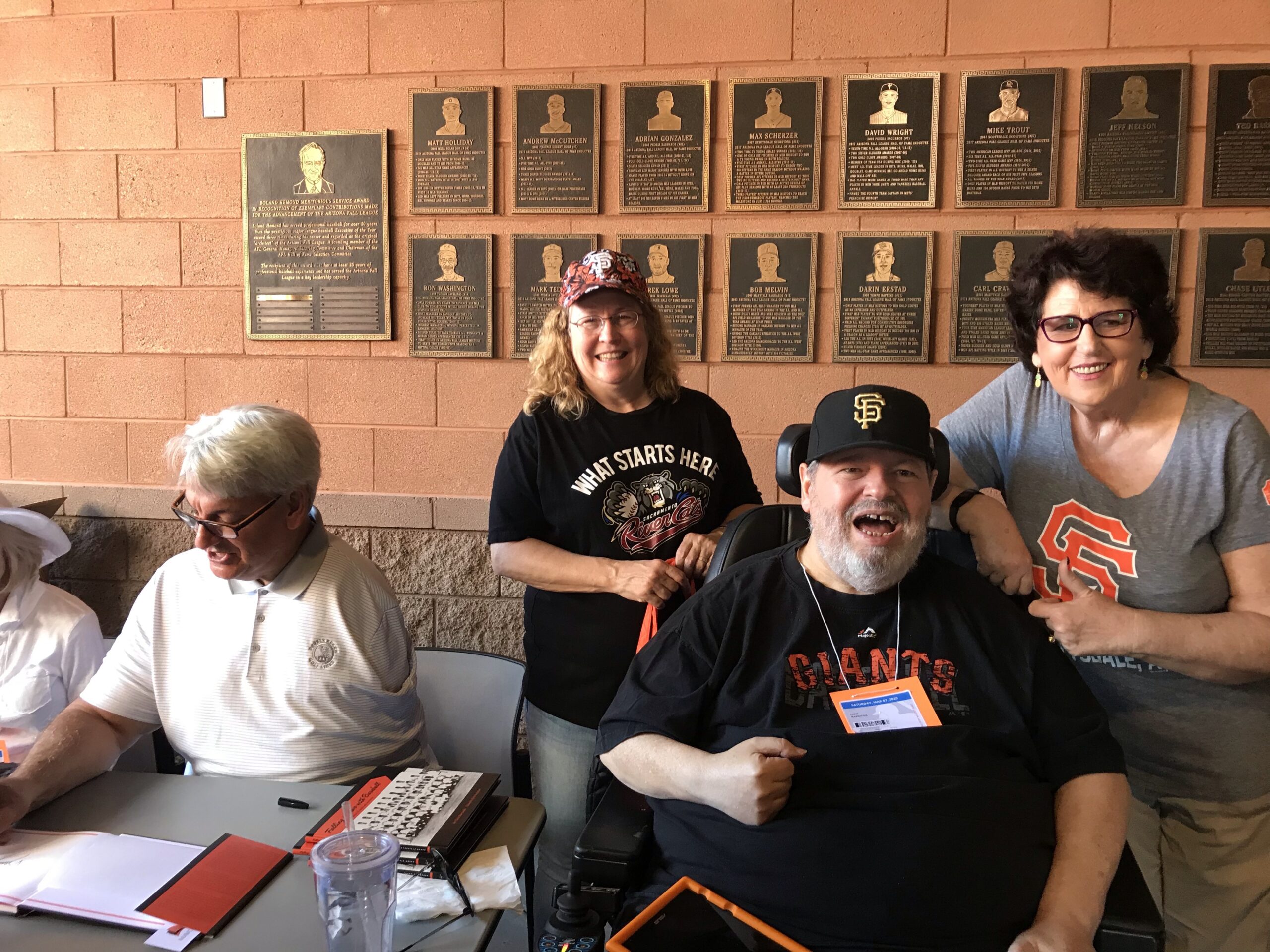 Blog legend Chris “Mavo” Mavraedis, author of “Falling in Love with Baseball,” at the book-signing table for ALS research. Off to his left is Dave Dravecky. Behind Mavo are me (left) and my college roommate, Jill Lee (right). Photo credit: Ric Lee (on DrLefty’s phone).

Today’s post will be the first of a two-part report on our visit to Scottsdale Stadium on Saturday (March 7) and Sunday (March 8).

We headed over to the ballpark around 11:30 so that we’d have time to visit the swag shop. We’d met Dave Dravecky in our hotel lobby the night before, and he mentioned that he’d be at the book-signing table with Mavo on Saturday, so I went looking for them. Also bumped into our college friends, Jill and Ric Lee, who are somewhat famous for being regulars on the Oracle Park patio during Marty Lurie’s pregame weekend shows. The Lees have separately become good friends with Mavo and his wife. Funny how worlds can intersect! We took several photos, one of which you can see above.

The game: This was a slugfest that ended up 12-7 Giants. Full box here. The Giants had 18 (!!) hits and four (!) home runs (but none by anyone in the starting lineup).  The most memorable moments, in chronological order:

This is my third spring covering games at Scottsdale Stadium and I'm not sure I've ever seen someone hit a ball as far as Zach Green just hit his home run.

Over the berm in left center field. That may have traveled 475 feet.

Kerry may be right about that, but Ruf’s second homer of the day (bottom of the eighth) cleared the CF scoreboard, and the sign out there says 430 feet. There was a lot of prodigious raw power being displayed yesterday. And yes, the players were all bumping elbows instead of high-fiving after the runs scored.

Gomez has barely ever pitched above A ball, and he’s not making the team. But he sure is a kick (and a snort, and shimmy) to watch.

Standouts (in a good way)

Cahill: As mentioned, he made a strong statement yesterday.

Ruf: He came in to replace Belt (who went 2 for 2) and went 3 for 3 with two very impressive homers. He’s in the starting lineup for Sunday.

Wandy Peralta: After the Blevins/Franco debacle in the sixth inning, Peralta pitched 1.1 innings, giving up no hits or walks and striking out three. He now has 10 strikeouts in five Cactus League innings and a 0.00 ERA. You may recall that the Giants picked him up off waivers from the Reds in September last year, and he appeared in eight games for them, doing OK. He’s another lefty who should be on the “maybe” list for the 26-man roster.  (He does, however, have a minor-league option.)

Mauricio Dubon: He had a quiet day at the plate (1 for 5), but he made two very slick back-to-back plays at 2B.

Catchers: Posey went 2 for 2 with a double and an RBI. Bart went 1 for 3 with a homer. Posey is now hitting .412 for spring with a 1.090 OPS. Bart is hitting .438 with a 1.400 OPS. Both catchers made nice catches of wind-swirled pop-ups, and Bart had to block a bunch of bad pitches in the Blevins inning.

Standouts (in a bad way)

Jaylin Davis: He looks mostly lost at the plate and made a dreadful miscalculation in CF during that sixth-inning implosion. He dove for a ball that got past him all the way to wall with no one backing up, and two runs scored. I honestly thought the batter might go all the way around to score. Davis is in the lineup for Sunday, but I don’t know how much more rope they’re going to give him.

Steven Duggar: He sure looks headed for AAA to me. Billy Hamilton came into the game late and went 1 for 1 and then scored from first on a double in about 1.5 seconds, give or take. B.Ham is fun to watch.

We had a really fun day. The weather was absolutely perfect, the crowd was rambunctious and happy, there was lots of action, and Tony Bennett sang us out. We had our ritual margaritas at The Mission on the way back to the hotel and then a fantastic dinner later at Citizen Public House.

Back later (either tonight or tomorrow morning) with a report on today’s game. We fly home late this evening. Lefty out.