LOL–We Waited Four Months for This?! 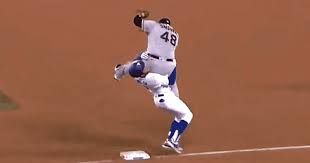 Look, we all knew the 2020 Giants weren’t going to be good. We knew they probably would be south of mediocre. We knew that starting on the road at Dodger Stadium was the worst possible scenario.

But I didn’t think it would be this bad. I hoped the energy of a new regime, the youthful enthusiasm of the new coaching staff, the motivation that comes from coming together in a crisis would lead to at least something less lackluster than what we’ve watched over the last 3+ years.

Let’s break this down, shall we?

The one good moment

Jaylin Davis, in several different ways, represents hope on this Giants squad. A thoughtful and sensitive young man, last month in a blog post he wrote in raw, eloquent terms of the racism he’s had to endure his entire life. As to the baseball, he hit 36 homers last year–35 in on two AAA teams and one walk-off homer, his first major league bomb, in the last week of the 2019 season. Of the various moves made by Farhan Zaidi at last year’s trade deadline, the acquisition of Davis and two young pitchers for Sam Dyson (who’s since come up with a serious injury and been accused of domestic violence) looks like the very shrewdest.

The Giants believe in Davis and want to give him opportunities to succeed. Last night he hit the first homer of the season for the Giants, an impressive opposite-field shot.

Jaylin Davis gets the Giants on the board 👏 pic.twitter.com/8tj1T7wJMy

Thus ends the highlights of last night’s game–at least for the Giants.

Well, unless you want to count Pablo Sandoval literally telling the Dodgers to “kiss my ass.”

I think it’s OK to laugh about this because Chris Taylor didn’t have to be taken off the field on a stretcher.

It’s not just that the Giants have been on the wrong end of lopsided scores in their first two games. Again, we might have expected that given the obvious talent gaps between them and the Dodgers. Even with Buster Posey, Brandon Belt, and Evan Longoria, this wasn’t going to be pretty. Without them—yeeeeesh.

The hardest part to watch has been the sheer ineptitude. The awful defense (four errors last night). Bad base running the first night. (Last night they hardly had any base runners, so no problem there!) Drawing one whole walk in two full games. Whatever happened to the Zaidi “get hitters who grind out at-bats” philosophy? And the pitching!–More on that in a minute.

Henry Schulman skewered the Giants in his gamer for their clear lack of preparation.

The #SFGiants looked absolutely terrible, simply not ready to play a major-league game, in their second straight drubbing at the hands of the #dodgers. Four errors, mental mistakes galore, mostly silence at the plate. But… Jaylin Davis. The story: https://t.co/kPM0uNVsxc

There is no disputing the talent gap. But that is compounded by poor management, both from Zaidi and manager Gabe Kapler. Let’s start with Zaidi. For the second year in a row, he’s put an outfielder on the roster who has no business being in an Opening Day lineup–and not just stuck him at the end of the roster but right into the lineup. This year’s “Joe” is Joe McCarthy.

Who is Joe McCarthy? Well, he’s a guy Zaidi picked up for nothing from the Rays last July. He hit .183 in 279 AAA at-bats last year. For the Sacramento River Cats, he hit .165 with a .488 OPS in 89 plate appearances with one (1) home run–in a Pacific Coast League that had absolutely insane power numbers last season.

So why is a guy who hit .183 in AAA last season starting in right field for the Giants in 2020? Yes, with Brandon Belt injured, the Giants are light on lefty hitters. But I’d argue that Steven Duggar would have been a better choice in this instance. Whatever you think about Duggar, he’s at least a plus-defender and has had some modest success in the major leagues. (OK, I said modest.) McCarthy had never played in the major leagues, and did I mention he hit .183 in AAA last year?

There have been a lot of “Connor Joe McCarthy” jokes, and understandably so. But here’s the thing. Connor Joe actually had more on the ball than Joe McCarthy has. At least Joe had an .879 OPS for AAA Oklahoma City in 2018. Zaidi is making worse choices as time goes on.

The only explanation I can come up with is that, like Trump with President Obama, Zaidi thinks anything he does is better than anything Bobby Evans did. So Connor Joe and Joe McCarthy are preferable to Mac Williamson and Steven Duggar because the former are “his guys.” But holy cow. Joe McCarthy? Don’t like the Duggar idea? Then forget platoons and play Slater or Ruf. At least those guys are major leaguers of sorts.

Anyway, the McCarthy experiment is going about as well as the Connor Joe/Michael Reed one did. He is 0 for 8 with three strikeouts in two games.

Manager Gabe Kapler told us during summer camp that the pitching choices would be unconventional. His starters wouldn’t be ramped up for typical starters’ outings, so there would be mixing and matching and piggybacking and “buckets” of pitchers. That made sense at the time.

Except that it doesn’t. Alex Pavlovic pointed out in his gamer that the Giants are the only outliers in the major leagues who are not using starters as, well, starters. Eighteen other teams had their starters go at least five innings in their openers yesterday. The Giants let Johnny Cueto go four innings in their opener (and he expressed astonishment at being pulled so early), used Drew Smyly and Kevin Gausman as relievers, and threw Tyler Anderson into a last-minute start that even the beat writers didn’t know about until Dave Roberts (yeah, the manager of the Dodgers) happened to mention it to them. It didn’t go well for Anderson, who kept walking people and couldn’t make it through two innings.

For today, Kapler has announced Logan Webb as the starter. Meanwhile, Jeff Samardzija, who was arguably the Giants’ best starter last year and was expected to be their #2 guy behind Cueto, is…where?

I’m calling it right now: Veterans like Cueto and Samardzija are not going to get behind this nonsense, and Kapler doesn’t have Posey and Longoria in the clubhouse right now to keep things in line. Expect to hear more unhappy comments in the days and weeks to come.

Then there are the bullpen choices. Putting Dany Jimenez, a Rule 5 draftee who hadn’t pitched above AA, into the seventh inning of Opening Night for his major league debut was the pitching equivalent of starting Joe McCarthy in right field. And then Kapler left him twisting in the wind when he couldn’t throw strikes. Just strange stuff. And–news flash–it’s not working. Not even a little bit.

The ugliest: from Meathead to Bonehead

On Monday night, the Giants made national news by being trailblazers. Kapler was the first manager/coach in any professional sport to take a knee during the National Anthem in protest of racial inequity. Austin Slater and Mike Yastrzemski were the first white players in MLB ever to do so. Alyssa Nakken made history by coaching first base, the first woman coach in major league history.

On Thursday night, the Giants made the news by Sam Coonrod deciding to make a spectacle of himself and then double down on it with incredibly stupid comments after the game.

“I’m a Christian, so I just believe that I can’t kneel before anything besides God,” said the right-handed reliever, talking entirely out of his ass.https://t.co/r7KsovLsUK

This Deadspin article linked in the Tweet is scathing and very well written. I recommend reading the whole thing, which starts, ironically enough, with Hunter Strickland (a/k/a “Meathead”).

The San Francisco Giants have been lacking a complete moron in their bullpen since they let wall-punching, brawl-starting, even-had-Fox News-wondering-if-he-was-racist imbecile Hunter Strickland go after the 2018 season.

Sam Coonrod, the job is yours.

The article concludes with this.

He gets to be known as a bonehead who tried to say he didn’t think God would be on board with him taking a knee to show some respect for the idea that people getting killed is bad. God, for the record, has historically endorsed that position.

So there you have it. We’ve gone from “Meathead” to “Bonehead.”

The article also is pretty brutal on Gabe Kapler:

Giants manager Gabe Kapler, noted for his ability to avoid reacting or hold people responsible for their actions, offered a predictably lackluster response…

Actually, what struck me in the aftermath of Coonrod’s nonsense was this quote from Kapler yesterday:

Gabe Kapler on Sam Coonrod, who did not join others in kneeling during last night's pregame ceremony for social justice:

"Sam and I are going to continue to talk every day so that he understands my position. And I want to understand his better. These are ongoing conversations."

I mean…every day??? I can just picture this over the next week or so.

Kai Correa: OK, Boneh–I mean, Sam. Kap wants you in his office for your BLM convo.

Sam Coonrod: Again? No–please!  I’ll kneel! Or DFA me! I don’t care which! Just don’t make me go in there again!

Well, one of two things is going to happen here. Maybe Kapler and Coonrod’s teammates will get through to him and he’ll see things differently and stop being such a jerk. Or he’ll continue to be a mediocre pitcher on the fringes of the roster who’s already gotten more attention than he deserves and will get swapped out for a different pitcher. I’m not sure which outcome to root for at this point. I will admit that when he was pitching last night, I was not especially wishing him well (the game was already out of reach, anyway), and when he stomped off the mound looking angry, I got definite Meathead flashbacks.

Hot off the presses from HaakAway: Congrats to Crawnik, the winner with 26 correct picks!

The good thing about baseball is that there’s a game the next day to try to wash out the bad taste of an ugly loss. Today’s game is early–1:10 p.m. our time.

The Dodgers are starting lefties today and tomorrow, so hopefully there will be a different lineup and things will go better for the Giants. And we’re only 0-2. We can still salvage a split!  Keep hope alive. Lefty out.