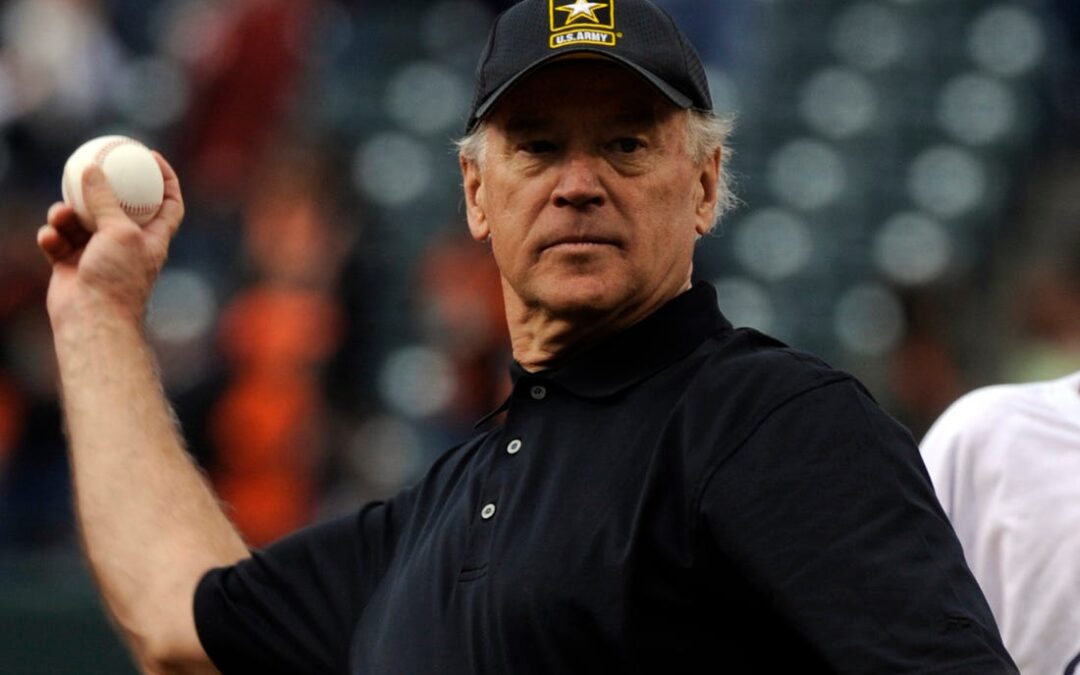 A very young Senator Joe Biden plays CF in a Congressional Baseball Game in the 1970s. Check out the number on his jersey!

It’s been quite a week, hasn’t it? The entire nation–the whole world–waiting breathlessly for days for the outcome of an important vote. And no, I’m not talking about Brandon Belt losing the Gold Glove or Donovan Solano winning the Silver Slugger. I for one am glad to get “back to our regular programming,” as they say on the TV networks. On this “channel,” that’s Giants baseball. This week I want to talk about free agency options/rumors/ideas. Soon we’ll also talk about minor leaguers to be protected from the Rule 5 Draft (Nov. 20) and arbitration-eligible players (Dec. 2).

The Current State of Affairs

Since I last updated this a couple of weeks ago, the Giants have made a number of 40-man roster moves. (Free agents are automatically moved off the roster when the World Series ends, so subtract Cahill, Gausman, Smyly, and Watson. Jeff Samardzija was released right before the end of the regular season.) The Giants added injured players Tyler Beede, Aramis Garcia, and Reyes Moronta back to the 40-man roster. Restricted-list players Buster Posey (COVID opt-out) and Jordan Humphreys (uhhhh, something) were also added. Tyler Heineman, Anthony Banda, and Joey Rickard were removed from the 40-man roster and outrighted to AAA Sacramento.

OK. So that leaves the Giants with six outfielders, nine infielders, four catchers, and 18 pitchers on their current 40-man roster, for a total of 37. There’s a bit of room for free agent signings, but they will require more space when they need to protect minor leaguers from being poached in the Rule 5 Draft.

There are still places to trim. Most observers don’t see Chris Shaw finishing the winter on the Giants’ 40-man, considering that he was the only position player to not even get invited to the preseason summer camp in July and wasn’t assigned to the Alternate Site in Sacramento until there were just a few weeks left in the season. You also have to wonder about Melvin Adon, who was similarly ignored this year. Rico Garcia wasn’t very impressive as a reliever. And that’s before we get to arbitration-eligible players who may get non-tendered. (Trevor Gott seems a prime candidate for that.)

As we all know by now, Gausman was one of only six major leaguers to receive a qualifying offer, worth nearly $19 mil for one year if accepted. We were also told that the Giants are concurrently negotiating with Gausman, who expressed an interest in returning, for a multi-year extension. MLB Trade Rumors has Gausman as the ninth-best free agent this offseason and guesses that he will accept the qualifying offer. Before the QO news, he was predicted to receive a 3-4 year contract with an average annual value in the $12-$14 million range.

If I’m Gausman, I’m not turning down that guaranteed one-year money unless I have an acceptable offer in hand from the Giants or someone else. This market is just too risky for all but the top free agents, and the QO will likely depress his value to other teams. I predict that he will either take the QO or agree to a new contract with the Giants before the deadline (Wednesday).

Now, it’s no surprise that the Giants want to keep Gausman. They need starting pitching, and he was easily their best starter in 2020. It also makes sense that they would want to recoup a draft pick if he signs elsewhere. But the most interesting part of this equation is them risking a one-year overpay of $5 mil or more. Not only does that show what they think of Gausman himself (and how much they need good pitchers), but it also signals that the Giants are willing to spend some money this winter. Let’s turn to that point next.

Is It Time (Yet) for Big Investments?

We all know that Farhan Zaidi was hired after the 2018 season to remake the Giants. So far, in two offseasons, he’s done practically nothing in regards to free agent spending. He’s made one-year investments in buy-low guys like Drew Pomeranz (2019), Gausman, and Drew Smyly (2020), and he’s made one modest multi-year deal with Wilmer Flores (two years, $6.25 mil, plus a third-year team option), which is looking fantastic at this point, I might add.

But the Giants surprised everyone by outperforming expectations, missing the playoffs by one game, and ending up with the exact same record as two teams that did make the playoffs (Brewers and Astros). They’ve also cleared some payroll with contracts ending (Samardzija and Watson, plus Gausman himself). They’ll have even more room to spend after next season, when the guaranteed contracts of Brandon Belt, Brandon Crawford, Johnny Cueto, and Buster Posey end (except for buyouts for Posey and Cueto). Here again is the Cot’s Contracts link that breaks this all down.

So…is this the winter they begin to spend money? Here’s how I handicap this.

I think that Zaidi/Harris will spend some money, starting with retaining Gausman. If you look through that MLB Trade Rumors top-50 list, there are a lot of good players to be had who will not break the bank. I see them spending on 3-5 of these moderately priced players to bolster the rotation and the bullpen. They reportedly also want another lefty bat, though it’s a bit hard to see whom from the position player side they’d cut to add a Joc Pederson or Tommy LaStella type. I don’t see them spending on another backup catcher at this point. Didi Gregorius would be an interesting play, given Crawford’s contract status. But Gregorius hasn’t played anywhere but SS since 2014, and Crawford’s never played another position, so I’m not sure what the Giants would do if they had both of them for a year.

I do not, however, believe Jon Heyman’s ridiculous prediction that the Giants will sign Trevor Bauer for 5 years/$150 million. Here’s an article breaking down likely destinations for Bauer, and the Giants aren’t in it. I’d say he’ll end up in New York (maybe the Mets’ new Mr. Moneybags will sign him; maybe he’ll reunite in the Bronx with college teammate Gerrit Cole) or LA/San Diego. Not Cincinnati, not Philly, not Toronto. New York or SoCal.

A couple of years ago, the Padres surprised everyone by signing Eric Hosmer to a large, long-term deal when their vaunted prospect class was still a couple of years away from arriving. The next year, they signed Manny Machado–and finished in last place in the NL West in 2019. But in 2020, things started to come together for them. There is something to be said for signing a cornerstone-type free agent(s) when you have the opportunity, even if your next really good team is several years away.

Are the Giants at the “Hosmer” stage in their rebuild? Perhaps. They did come in second for Bryce Harper a couple years ago, so it’s not like they haven’t considered it. But I think there will be modest but important investments for 2021, followed by some bigger spending a year from now when all those big contracts are off the books except for Longoria’s. (Take a look at who’s potentially in the 2021-22 class! Yowza!) By then, too, there will have hopefully been a minor league season so that the Giants can assess the development of their own best prospects.

So that’s how I see this winter’s business for the Giants–modest but strategic free agent purchases, but this time off the top-50 list, not just the clearance bin (though there will likely be some of those, too). I also predict that Zaidi will move quickly. We won’t be waiting until January for news this year.

Now that the election is over, let’s all take a breath and get back to talking baseball. And as we do, let’s remember some rules of civility. OK, ONE rule:

Do not bully, mock, name-call, or otherwise abuse other TWG commenters.

We had a blog regular choose to leave us last week and announce her departure by blaming the decision on the actions of another commenter. Some of you feel sad/frustrated/angry about that. You’re entitled to your feelings and opinions about it. However, it is not OK to break the above rule because you’re upset about the person leaving–or for any other reason.

We all have different personalities and communication styles. There are things that bug me that might not bug you, and vice versa. But there’s a difference between someone annoying you and someone abusing you. For the former, you have options that include blocking the person or just simply ignoring them and scrolling through.

I can think of 2-3 former regulars over the years who have left in large part because of something I said (or just general dislike of me). I feel sad about that. My view is that TWG has room for all of us, and I wish they hadn’t chosen to leave and had either just ignored me or blocked me if I bothered them that much. But in the end, that was their decision, and we all have to take responsibility for our own choices.

If you believe a commenter’s behavior towards you or others crosses the line to being abusive, call it out–and if it persists, most of you know how to reach GG or me. We can make a decision as to whether that person’s actions are egregious and entrenched enough to take more official action.

Thanks for reading. Everyone take care and stay safe, especially with the virus surging so widely now. Lefty out.