O Pitchers, Where Art Thou? 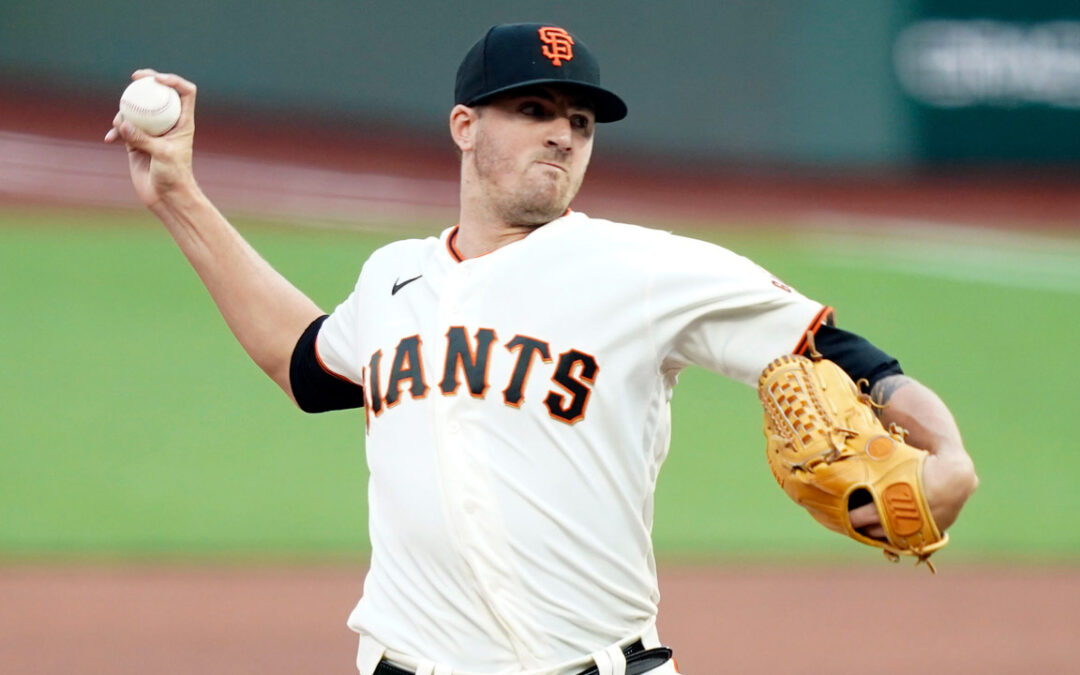 It’s been another busy week for the Giants, including the widely expected announcement that Gabe Kapler won the NL Manager of the Year Award, that Brandon Belt accepted his qualifying offer and will return for at least one more year with the Giants, that Brandon Crawford finished fourth in the NL MVP voting, and that the Giants protected three minor leaguers from the Rule 5 Draft by adding them to the 40-man roster. Let’s start with that last item, since it just happened yesterday, and then we’ll get to the discussion of pitchers that the title suggests.

So if you entered HaakAway’s Hot Stove contest, how did you do on this one? I actually had named five minor leaguers I thought would be protected, and I got only two right–the most obvious ones, outfielder Heliot Ramos (2017 first-round draft pick) and right-handed pitcher Sean Hjelle (2018 second-round pick). The third, San Jose relief pitcher Randy Rodriguez, made me go “Whooooooo?” and run straight to Baseball Reference. Once I looked him up, I was like, “OK. I get it.” Check out his 2021 numbers, especially the strikeouts to innings pitched (101/62) and the strikeouts to walks (101/23). Oh, and the home runs allowed: 0. In fact, he’s given up just two homers in his entire pro career so far.

There are two interesting things to note here. First, 2021 was a breakout season for Rodriguez. His previous two pro seasons were in the Dominican Summer League (2018, age 18) and the Arizona Rookie League (2019, age 19). The ERAs aren’t good. The strikeouts are slightly above the innings pitched, but nothing that leaps off the page at you. He gave up a lot of hits and walks, so the WHIPs weren’t impressive. But it all changed in 2021. Second, Rodriguez wasn’t on any top prospect lists. He didn’t get sent to the Arizona Fall League. He was just quietly toiling away in San Jose. It’s not surprising if you missed him, given that San Jose had a great pitching staff with much bigger names like Kyle Harrison, Nick Swiney, and Ryan Murphy. Here’s a compilation of some of his good moments from this season.

Contrast this trajectory to that of Seth Corry, who to the surprise of many (he was on my ballot) was not added to the 40-man roster yesterday. Corry, a lefty drafted out of high school in the third round in 2017, began the 2021 season as the Giants’ top pitching prospect after a breakout 2019 season in which he was named the South Atlantic League Pitcher of the Year. Again, check out his BBR numbers.

I mean, Corry’s 2019 numbers were eliciting comparisons to the SAL year of one Madison Bumgarner, another high school lefty you may have heard of. But then Corry fell off a cliff in high-A Eugene this year. Before 2019, he walked way too many batters. In 2019, he seemed to have made a big leap forward, with a WHIP of just 1.068. In 2021–yeeesh. Sixty-three walks in 67.2 innings and an ugly WHIP over 1.7. Still, Corry is listed as the Giants’ #11 prospect, and they did send him to the AFL, where he finished the season strong. But none of that was enough for the Giants to add him to the 40-man roster.

This could mean one of two things. First, the Giants’ assessment is that Corry is still too raw to stick on another team’s 26-man roster next year, so no one will take him in the Rule 5 Draft–or if they do, they’ll be sending Corry back in due course. Either way, they won’t risk losing him, at least not for long. Second, it might mean that their internal evaluation is that Corry won’t get much better, so if they do lose him, whatever. In any case, I thought this was the most interesting omission, especially considering the Giants’ lack of advanced starting pitching prospects, which I’ll get to in a minute.

The Giants had a huge list of Rule 5-eligible prospects, and they couldn’t protect all of them. Other notable omissions were AAA catcher Ricardo Genoves (especially after the shocking retirement of Buster Posey), AA 3B David Villar, and outfielder (and high A batting champion) Ismael Munguia. But those are less surprising decisions since position players are only rarely taken as Rule 5 picks.

To make room for the three additions, the Giants returned last year’s Rule 5 pick, Dedniel Nunez, to the Mets and DFA’d Jay Jackson. The latter move is a bit surprising, as the team just picked up Jackson’s team option for 2022. But perhaps the brain trust is assuming that Jackson will clear waivers because of the salary and that they’ll get him back.

Rumors, but no pitchers?

The Giants have been linked in the rumor mill with nearly every interesting right-handed-hitting free agent: Marcus Semien, Starling Marte, Chris Taylor, Nick Castellanos, and Seiya Suzuki. The interesting thing about that list is that each name represents something different. Semien, who just won the AL Gold Glove at 2B, would help shore up the infield. Marte is a centerfielder, Taylor is a Swiss Army knife, and Castellanos is a likely DH candidate. The only thing they all have in common is batting right-handed, and it’s certainly understandable that the Giants would seek a RH bat after losing Posey and likely Kris Bryant.

While it’s intriguing to hear the Giants connected to all of these attractive free agents, the obvious question is where are the rumors about starting pitchers? After all, right now the 2022 rotation consists of some combination of Logan Webb, Sammy Long, Tyler Beede, Caleb Baragar, and Sean Hjelle. I’m guessing none of you are any more excited about that list than I am (with the obvious exception of Webb). Meanwhile, three big names have already gone off the board (Noah Syndergaard, who signed with the Angels, Justin Verlander, who signed back with the Astros, and Eduardo Rodriguez, who signed with the Tigers.)  Meanwhile, the Dodgers appear to be shopping at the “dented can emporium” (hat-tip: Grant Brisbee) where the Giants have been buying pitchers over the last several years, signing lefty Andrew Heaney to a one-year deal at a base salary of $8.5 mil.

I wasn’t too worried about this until I read Brisbee’s article last night, though I had made a nervous comment to MrLefty about all the rumors about hitters. (“What about pitchers?”) But Brisbee points out that (a) a lot of names are going off the board more quickly than many had anticipated; (b) they’re making a lot of money (over $20 mil each to Syndergaard and Verlander, who are both coming off Tommy John surgery and haven’t pitched much or at all since 2019); (c) other teams have caught on to the “dented can” strategy after several years of Zaidi being ahead of the curve with the Giants (and Dodgers); and (d) Zaidi has never been known to give out lengthy contracts to starting pitchers. Andrew Baggarly wrote about this last week, too, with pointed quotes from and about Kevin Gausman (who, by the way, finished sixth in NL Cy Young voting this year, the first Giants pitcher to get Cy Young votes since Bumgarner and Cueto in 2016). With the Dodgers, the longest contract Zaidi gave out was a four-year deal to Brandon McCarthy (which didn’t go well). With the Giants, he’s negotiated one two-year deal with one pitcher, Jake McGee, a reliever. So–in his three years and counting with the Giants, Zaidi has never signed a free agent starting pitcher for longer than one year.

What does this all mean? Well, maybe nothing. Obviously Zaidi knows that (1) they need to replace 80% of their rotation (2) they don’t have ready-made replacements in AAA (3) they’re going to have to invest in free agent starting pitching (4) after 107 wins and a division title, expectations are higher now (5) he has money to spend and (6) it’s a sellers’ market, and good free agents are going to cost money this year. An interview this week with Giants’ GM Scott Harris seemed to indicate that they understand all of these dynamics. He said all the right things:

So…should we worry? Maybe a little bit. It wasn’t that long ago that Zaidi mistimed the market and opened the 2019 season with basically zero major league outfielders. But a few things are different now, most notably that the Giants have money to spend, prospects to trade if they want to go that way, and are a much more desirable destination given their recent success. It will probably be OK. Probably. But I’d sure feel better if I heard some rumors linking the Giants to free agent starting pitchers.

Well…Thanksgiving, when the Hot Stove tends to cool off for a few days. But maybe this year will be different with the clock/calendar moving toward a likely work stoppage on December 2, just 12 days from now. Also, December 1 is the deadline for teams to tender contracts (offer arbitration) to their players who are eligible. So we’ll see if the Giants close any deals in that rapidly closing window. Should be interesting and maybe a bit nervewracking. Lefty out.