Of Sadness, Hope, The Eagles, and Joe Walsh 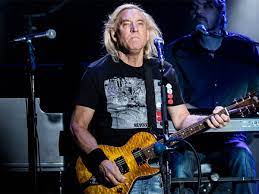 For baseball fans, this week was discouraging. First, the league and the players’ union finally got back into a bargaining meeting–in fact, they had two, on Monday and Tuesday–and it still sounds like the two sides are far apart, talking over each other publicly, and very entrenched. I’m not here to take sides (generally I side with the players), but I was hoping there would be some progress. Here is one article from Forbes that offers a glimmer of hope, but there’s a long way to go. And it’s tough when there are major trust issues and hard feelings over what’s happened in the past (specifically the management-friendly CBA negotiated in 2016), and discussions can get easily derailed.

Second, we had the Hall of Fame announcement, which Greek Giant addressed in a post earlier this week. I share his and many others’ disappointment about Barry Bonds falling short in his final year on the ballot. This is bad enough in and of itself, but David “Big Papi” Ortiz sailing in as a first-ballot selection just proves how inconsistent and hypocritical the whole process is. And don’t give me “Well, but the character clause…” when Ku Klux Klan members, drug and alcohol abusers, and wife-beaters are already enshrined. Not to mention Bud Selig and Tony La Russa, whose own HOF credentials clearly were established because of the steroid/PEDs era. I could go on, but it’s all been said.

When I was out for a walk yesterday and listening to Baggs and Brisbee’s latest podcast, they talked quite a bit about the HOF selection. Baggs has been a HOF voter for many years, and he said that the “character clause” is always problematic because it’s so subjective. It struck me that MLB’s crackdown on various issues–PEDs, domestic violence, and the “Astro-gate” cheating scandal–is going to make it harder for offenders to clear the “character bar” with the voters. If you’ve been, say, suspended for domestic violence, shouldn’t that automatically mean you’re ineligible for the HOF? (Just to be clear, I think it’s good that MLB, with the cooperation of the players’ union, is running a tighter ship on these things.) The case of Carlos Beltrán, who will appear on the HOF ballot for the first time next year, will be an interesting thing to watch.

For a final word on this topic, I recommend this piece by the San Francisco Chronicle’s Scott Ostler, who explains that this was his first time as a HOF voter and why it will also be his last. Very well said.

Finally, former Giants coach Gene Clines passed away this week at age 75 and was mourned all over baseball.

I think I've said this before, but Gene Clines was one of the warmest, nicest people I've ever met. He made a huge impact on me as a kid going to the ballpark. https://t.co/lfLUe4vBtr

So you’re saying there’s a chance…?

So, yeah. A sad week. Here’s one possible snippet of good news, though. It sounds like rumors have Japanese outfielder Seiya Suzuki narrowing down his list of finalists to three or four and that the Giants are on the list. He appears to prefer a team that trains in Arizona and is planning to tour the Phoenix-area facilities of the Mariners, Cubs, Padres, and Giants. Peter Gammons also tweeted out that “GMs” believe Suzuki will sign with the Giants. For whatever all that’s worth.

New report suggests Mariners are among the favorites to sign OF Seiya Suzuki. And the GM consensus right now is the Giants get him ahead of the Mariners. https://t.co/fng3YWiJPE

In the same podcast I mentioned earlier, Baggs, who to date has been the only English-speaking baseball writer to snag an exclusive interview with Suzuki, said that money is not likely to be the differentiating factor–his contract parameters as to years and salary are known, and all teams in the mix will be willing to meet them–but rather where the best fit is for him. So it’s encouraging that the Giants are in the mix, but–we’ve been down this road before. The Giants even got an interview with Shohei Ohtani, even though it was obvious at the time he’d sign with an AL team so that he could be a two-way player. That is not an issue with Suzuki, who is an outfielder and by all reports a very good one.

Welcome to the Hotel California

Obviously Suzuki would be an exciting addition and a good fit for what the Giants need right now. Fingers crossed that we finally receive a rose this time. But whether they do or don’t land Suzuki, the Giants absolutely need to add some firepower to a lineup that’s lost Buster Posey and Kris Bryant (unless they actually bring Bryant back, which is still possible though unlikely). Grant Brisbee’s somewhat tongue-in-cheek response to a tweeted question yesterday is below.

If you’re all “huh?” about Story playing CF, Grant was riffing off his latest article in The Athletic, in which he muses about what creative moves the Giants could make if there’s a universal DH in the new CBA (sounds likely–it’s one of the few things both sides happily agree upon). He throws out a bunch of other free-agent names the Giants could consider under the universal DH scenario who are a tier below Bryant, Suzuki, Story, or Carlos Correa: Andrew McCutchen, Daniel Vogelbach, Nelson Cruz, Jorge Soler, and Kyle Schwarber; he also mentions Mike Moustakas and Matt Olson as possible trade candidates. Oh, and Freddie Freeman, but he was just screwing around with that one. For that matter, if there’s going to be a DH, why not keep talking about Nick Castellanos? (OK, I know why–he wants too many years and too much money.)

Now you’ll notice that in Brisbee’s list, there are both right-handed and left-handed hitters, and guys who can play good defense and ones who absolutely cannot, so–what the heck is he doing here? Well, he’s arguing that the Giants are built around having a whole roster full of Swiss army knives and that they also want to consider load management, especially with aging but still productive players like Brandon Crawford, Brandon Belt, and Evan Longoria (and to a lesser degree, Darin Ruf, but he’s already a bench guy). Nothing wrong with, for example, having both McCutchen and Ruf in the lineup against lefty starters (or on the bench for late-game lefty relievers), or having Longoria DH sometimes to reduce the wear-and-tear on his 36-year-old body, even though he’s still an excellent defensive 3B. Same with Belt and Crawford from the left side.

MrLefty and I were discussing all this over dinner last night, and he brought up an analogy from the history of rock/pop music. It’s one that fits the demographics here at TWG. In the early 1970s, the Eagles were an up-and-coming band. They were very good at what they did, but they were really more of a country-pop sound. Don Henley wanted to take them to the next level and give them a rock edge. So…Joe Walsh and Hotel California in 1975, and the rest is rock-and-roll history. (And at 74, Walsh is still touring with the Eagles. We saw him in Vegas in September 2019 at their “Hotel California” tour.)

The Giants are good and as an organization are on the rise. But for this next phase, before the youngsters arrive and even bridging into that era, they need their Joe Walsh. For that matter, they could skip ahead a few decades and add a Vince Gill, who replaced the late Glenn Frey in 2016. Gill is a superb fit for the Eagles, both vocally and instrumentally. They have also added Frey’s 20-something son, Deacon, so there’s your connection to the next generation. You have the originals (Henley, Timothy B. Schmit, Walsh) now well into their 70s, the replacement, Gill, in his 60s, and the next-gen addition (Deacon Frey).

Farhan Zaidi is Don Henley in this analogy. He needs to take it to the lim–I mean, he needs to find the “Joe Walsh” who can pump up the Giants’ energy and take them to the next level. He needs to find a “Vince Gill” to seamlessly fit in and replace what the Giants have lost. And he needs to keep making room for the “Deacon Freys” who are on the way.

Don Henley is a genius. So is Zaidi. And I’ve got a peaceful, easy feeling about all this. But I’m finishing this riff with “Hotel California” because I’m thinking about Joe Walsh and his guitar solo.

Congratulations and best of luck to the 49ers, who will take on the LA Rams tomorrow to see who will represent the NFC in the Super Bowl. It wouldn’t exactly make up for the Dodgers knocking the Giants out of the playoffs in 2021, but it would still be nice if the Niners could win. Also congratulations to Andrew Wiggins for making the NBA All-Star starting lineup, to Klay Thompson for looking more like Klay Thompson this week, and to Steph Curry for finding his misplaced shot.

And thanks to Greek Giant, who gifted me with the wonderful keepsake in the photo below! He knows that Brandon Belt has always been MyGuy. Lefty out.