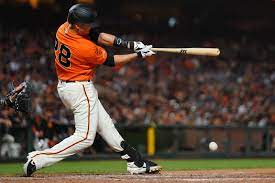 I had a very bad day on Thursday. It started out well. I woke up all excited about Opening Day, had a nice visit with Crawnik, who stopped by on his way home from work, scored tickets to next Saturday’s game at Oracle Park, and had a successful first meeting with the graduate seminar I’m teaching this quarter. Finished class and hopped on the bike for a 45-minute ride and then headed to the kitchen to start on my Opening Day dinner menu.

Then I checked my email, and I’ll be vague, but I got some awful news at work. I’m still reeling from it. I went ahead with the Polish dogs and opened a bottle of wine and hoped that the Giants game would temporarily take my mind off my troubles. For awhile, it did. But then–well, you all know what happened, and Greek Giant had a colorful headline for his gamer yesterday.

Here’s the good thing about baseball, though–there’s (nearly) always another game the next day to wash the bad taste out of your mouth. And last night’s game did just that. Buster Posey and Evan Longoria both hit their second homers in two games, Donovan Solano had his usual clutch hit, Johnny Cueto was good enough, and unlike on Thursday, the bullpen got the job done.

Buster is on pace for 162 homers this season 🙃 pic.twitter.com/EWiyisBCdE

So what can we say about these two games, taken together?

The Triumphant Return of Buster Posey

My most optimistic hope for Posey coming into this season was that he’d channel his 2017 season. Now, 2017 was a bad year for the Giants, and that’s putting it politely. But Buster had a good year, hitting .320 with a .400 OBP with an fWAR of 4.7. He only hit 12 homers, but it was still a solid season. He was an All-Star. He got at least one MVP vote. He won a Silver Slugger award. But now he’s 34 years old, and since 2017, he’s had hip surgery and then opted out of the 2020 season. I assumed he’d still be great behind the plate, and I hoped his batting average and OBP would bounce back after a disappointing 2019 season. But I figured his homer-hitting days were well behind him.

Well, surprise on me. He’s hit two homers already, and that first one was a thing of beauty.

I liked what I saw from Buster in Scottsdale last spring. It was disappointing, if completely understandable, when he opted out. I believe this is going to be a good year for him, and I agree with those who believe he’ll back in a Giants uniform next year. I don’t know if they’ll pick up his team option or work out a new deal, but as Baggs and Brisbee noted, he saved the Giants $8 mil by opting out last year. Maybe some of that could roll into a new 1-2 year deal for Buster?

Who is Chris Flexen, you might ask? I didn’t know, either, so I looked him up. He is a 26-year-old right-hander making his Mariners debut tonight. He pitched briefly for the Mets in 2017-19 (not well, I might add), and spent 2020 pitching in Korea. We’ll get our first look at how the Giants will line up against a righty starter. Sadly, it seems likely that it will be Curt Casali and not Buster Posey catching Webb. But Casali is a veteran, and from his quotes during the spring, I know he thinks highly of Webb’s stuff, especially his changeup. Hopefully they will work well together and Webb will keep building his confidence.

Off-day tomorrow on Easter Sunday, oddly enough. I’m just so happy that baseball is back. Enjoy the game tonight. Lefty out.