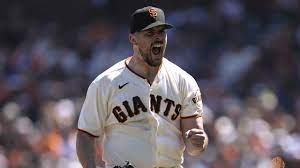 How good was Carlos Rodón in Cleveland last night? Well, bear in mind that the Guardians were–and still are–the top-hitting lineup in baseball in the early going (first in batting average and OPS, second in OBP and SLG). Rodón held them to two hits in seven innings. It’s worth remembering that he spent all of his career until now in the same division as the Indians/Guardians, so he was familiar with the park and the opponent. They remember him, too.

“We’ve seen enough,” Guardians manager Terry Francona said. “I’m glad he’s in the National League and this is the only [matchup] … because he’s had his way with us.”

Yeah, so far I really like this guy. He’s got it all–the power pitches, the intense demeanor, the ace’s ability to dig deep when he needs to. In the bottom of the seventh, with the Giants up 2-0, he walked Jose Ramirez and then gave up a single to Franmil Reyes on a 3-2 pitch. “Uh oh,” I said on our family text thread. “He’s running out of gas.” Then he struck out Amed Rosario on three pitches, the last one over 99 MPH. BrotherLefty: “99 is running out of gas?!”  Me: “I guess he found a gas station.”

Rodón did give up a run in that inning on a sacrifice fly but left the game with a 2-1 lead. In the top of the eighth, I felt that the Giants needed a cushion, so when Bart was up with two outs and Thairo Estrada on second (thanks to Ramirez for the throwing error that put Estrada on base and got the inning to Bart), I said on the blog that “A Bart Bomb right now would be really good.” 30 seconds later, boom, I called it.

Joey Bart. What a swing 😲 pic.twitter.com/OGJouOM84r

The two earlier runs came from solo homers by Brandon Crawford (his first of the year) and Joc Pederson (his second, but his first off a real pitcher[!]). It was a good win and especially memorable because of the new partnership of Rodón and Bart.

The Giants are 5-2. Going into the season, they were projected to have solid-to-excellent pitching and below-average offense. One projection had them last in the NL in runs scored, which would be a pretty big drop-off from last season.

So far they’ve had excellent pitching (2nd in MLB in team ERA, 2nd in rotation ERA, 5th in bullpen ERA) and OK-to-good offense (11th in team OPS, 15th in batting average, 14th in OBP, 8th in SLG). As with last year, they are a homer-heavy offense (tied for 6th in MLB with nine homers so far), but oddly, all of their homers have come in just three games (three each in games 1, 5, and 7). They are middle of the pack in striking out (13th) and drawing walks (16th). So overall, it’s maybe a bit better than some pundits predicted, with room for improvement when Evan Longoria, LaMonte Wade Jr., and Tommy La Stella are healthy again.

The bullpen has been a bit shakier the first week than I had anticipated. The two losses thus far have been charged to Jake McGee and Tyler Rogers, and Camilo Doval blew the save on Opening Day. Doval has somewhat righted his ship since then (two for two in save opportunities, including last night) but has yet to throw a clean inning. Fastball (cutter?) command has not been consistent, so he’s been relying heavily on his slider, which hitters then sit on. Considering that, two walks in 5.1 innings isn’t terrible, but six hits on top of the two walks isn’t great, either. On the plus side, second-wave relievers Jose Alvarez, John Brebbia, and Jarlin Garcia have been great so far.

Probably the biggest surprise is how inept the defense has been. The Giants have the worst fielding percentage in baseball over the first week and are near the bottom in Defensive Runs Saved. This is a problem for a team with starters that rely on contact over strikeouts. Some of this will be resolved if Longoria can come back sooner rather than later and mostly stay in the lineup. Wilmer “Born to be a DH” Flores has been avert-your-eyes bad at 3B. Bench player Luke Williams (tWAR 1.0) is much better there, but it’s hard to keep Flores’s bat out of the lineup. Four-time Gold Glover Crawford has muffed a couple of routine plays, and hopefully that’s just early-season rust. Estrada has ranged from athletic and brilliant at 2B to…not so much. Two positive standouts have been Brandon Belt at 1B and Mike Yastrzemski in RF.

The Giants have had four save opportunities in their five wins and converted three (the aforementioned blown save by Doval). The other guy to earn a save was…not McGee and not Rogers. It was Dom Leone in Sunday’s win against the Marlins. Doval and McGee had pitched in both of the first two games, so they were unavailable, and Rogers pitched the eighth inning of that game. In Game 2 (a loss to the Marlins), McGee and Doval both pitched in the seventh inning. This is to say that while it kinda sorta appears that Doval is the default closer, the situation remains fluid.

My prediction: Doval is going to figure it out from here and be the primary closer. Game 1 was pretty bad, but he got right back on the horse the next day and pitched well. He put us through Brian-Wilson-style torture in Wednesday’s 2-1 win, loading the bases before closing things out. And last night was better than that (though I was thankful that they had a three-run lead because I requested a Bart homer in the eighth).

I’ll admit I had equal parts anticipation and anxiety about Bart going into the season. I knew we shouldn’t hold 2020 against him, all things considered. I knew he had a solid year in AAA and that the team was saying all the right things about him in spring training. I knew he was a #2 pick and has the pedigree. Still…I wasn’t convinced that he was going to be even a tolerable replacement for Buster Posey and wondered what Plan B might be if he crashed and burned on both sides of the plate.

The biggest happy surprise of the season so far is not the rotation because we all thought that was going to be good. Bart is the happy surprise. In 22 plate appearances, he’s had six hits, four walks (that’s more than he had in 33 games in 2020), and hit two homers. He’s also struck out 10 times, which is a lot, but that’s going to be who he is. He’s taking good ABs and looking confident at the plate. He’s working well with the pitchers, and no, I don’t think the too-many-sliders thing from Doval on Opening Day was Bart’s fault. Doval could not throw his fastball for a strike. Curt Casali continues to be the solid backup he was last year, and the Giants have won both of the games he started. The first was a thorny path through a shaky Anthony De Sclafani and four relievers, and the second was Logan Webb‘s brilliant start on Wednesday.

Obviously the Giants will miss Buster Posey in every way you can miss him–his bat, his defense, his leadership. But the catching situation looks quite stable and solid so far, and I wasn’t sure we’d be saying that at this point.

Prospect of the Week

Lefty Kyle Harrison (Giants’ #3 prospect on MLB.com) is off to a great start with the High A Eugene Emeralds. In two starts, he’s pitched nine innings, given up 0 runs, 4 H, 1 BB, and 16 Ks (!!!). Harrison will be 21 in August. If he keeps this up, could we be seeing him in the majors by 2023? Comparison point: Madison Bumgarner started the 2009 season in High A (San Jose at the time) and finished it in the major leagues. He had just turned 20 when he made his MLB debut in September 2009. Hmmmmmm.

If you are not in on him last year, there are still some slots available on the wagon. pic.twitter.com/xeqiPOPgwS

Here’s hoping Tony D looks better than he did the last time out. Tough lineup. And Happy Birthday to Bruce Bochy! Good luck to the Golden State Warriors as they begin their playoff run (first since 2019) tonight. Lefty out.