Order Restored? /Not So Fast, Molly 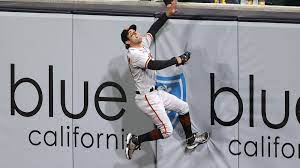 Until the last two games, I didn’t think it was a good week for the Giants. They came off the humiliating sweep at home last weekend by the Dodgers–which their obnoxious beat writer, Molly Knight, smugly described as having “restored order” in the NL West–and barely got by the lowly Diamondbacks for a two-game sweep in Arizona. (OK, they won easily on Tuesday but needed a late rally to win Wednesday’s game.) Then they came into Dodger Stadium on Thursday and managed a lackluster three hits in what was a bullpen game for the Bums. With Buehler-Urias-Kershaw lined up for the rest of the series, it sure looked like the Giants would be 0-7 against the Dodgers and proven to be the pretenders everyone has assumed that they are.

What a difference 48 hours makes. I haven’t been a big fan of the infatuation with Mike Tauchman, but that was a huge catch on Friday night. He robbed a first-ballot Hall of Famer of homer #669 (which Pujols got last night), saved the game, and swung the momentum of the series. It’s just one game, in May at that, but given the batter, the game circumstances, and the larger context–it was amazing.

Let’s watch it again, shall we?

MIKE TAUCHMAN WITH THE CATCH OF THE YEAR 😱 pic.twitter.com/PmGZbeV6oZ

What did you think about that catch, Albert?

The Dodgers, of course, were all ready to celebrate a dramatic comeback victory, and then…

So to review, the Giants won easily despite bad base running, bad defense, and bad relief pitching. They beat a really, really good starting pitcher who has owned them for the past five years. That was a great win for them. So whaddya think, Molly? Now that the Dodgers are back in third place, has order been restored?

Some standouts this past week

One of the most impressive home runs I’ve ever seen in San Jose. https://t.co/6emrYld7gQ

This may be one of the best pitching matchups of the season so far. Neither pitcher appeared in last weekend’s series. Gausman is in the top 5 to 10 in almost every pitching category (third in NL/fourth in MLB in ERA at the moment), and while Kershaw’s numbers are not as stellar, he’s still a great pitcher having a very good year. Since the Giants’ lineup teed off on a lefty (Urias) last night, it will be interesting to see if they can find similar success against their old nemesis Kershaw.

Worst case, the Giants will conclude their road trip 4-2 with a split at Dodger Stadium. Best case, 5-1 and winning 3 of 4 from the Dodgers. Order has been unrestored. Lefty out.