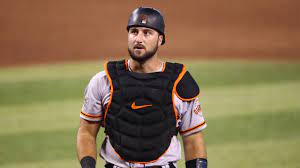 It’s hard to get very enthusiastic about baseball right now. Ahead this weekend are the long-awaited return of Klay Thompson to the NBA and the 49ers’ must-win (probably) game against the LA Rams. There hasn’t been a whisper of news about anything related to baseball in some five weeks now, unless you want to count MLB Network firing Ken Rosenthal this week because he spoke too much truth about commissioner Rob Manfred. (On the other hand, the New York Times Company bought The Athletic, so all in all, I’d say this week turned out well for Ken, and Andrew Baggarly, and Grant Brisbee, and the whole crew.)

Last week we reminisced one last time about the magical Giants season of 2021. In this week’s column, as promised, I’ll take a similar approach in looking ahead to the 2022 season. (There will be one!) In other words, I’ll have categories with multiple-choice options, my own vote, and a chance for you to weigh in. The difference, of course, is that we’re just spitballing about what might happen, rather than expressing our opinions about what did happen. As I did last week, I’ll have my own picks indicated in bold.

DeSclafani had a really good year for the Giants, though it’s easy to forget that because he pitched poorly against the Dodgers. But there’s a reason he was the one rewarded with a new three-year deal. Cobb could be a nice sleeper pick here, as could the always popular “Other,” which could be a AAA guy or a free agent the Giants haven’t acquired yet. But I think Wood has the most upside of any of these guys, so he gets my vote. Fingers crossed on him staying healthy enough to make a full complement of starts in 2022.

The #Giants also are reportedly nearing a deal with Alex Wood. Wood posted a 3.83 ERA with 152 Ks over 138.2 innings. San Francisco is doing everything they can to build of last season’s impressive run. #MLB pic.twitter.com/g2xIPAvXzB

I excluded Tyler Rogers, Jake McGee, and Camilo Doval because they are definitely not “under-the-radar.” After a disastrous first six weeks of the 2021 season, the Giants did a brilliant job of rebuilding their bullpen, and there were a lot of solid contributors (including Tony Watson, Jose Alvarez, and Zack Littell, among others). I’m picking Santos because he was dazzling people at the Arizona Fall League, and he may have just as much upside as Doval. Santos has had trouble staying healthy throughout his minor league career, but maybe 2022 is his year.

It’s hard to bet against Crawford after the year he had. If he plays Gold Glove caliber shortstop again, he’s going to rack up the WAR.

BRANDON CRAWFORD GOT UP!! pic.twitter.com/KsZvQDo8uV

This one is hard because the Giants really did have a great year, and the true disappointments are gone already (Alex Dickerson, Johnny Cueto, Aaron Sanchez, Matt Wisler, etc.). Dubon is probably the biggest bust on the list when you consider he was the Opening Day centerfielder, was demoted to the minors by the end of June, and only played a handful of major league games in the second half of the season. As for Yaz, it’s hard really to call a guy who hit 25 homers with solid defense a “bust,” but he definitely regressed in 2021 after his sparkling 2020 season. Why do I think he’ll bounce back? Just because I want him to. It’s OK to vote with your heart in January.

Prediction: High-Profile AAA Guy Who Helps the Giants the Most in 2022

Guys like Dubon and Beede should take heart from the late-blooming 2021 success story of Steven Duggar, a guy from the former regime whom a lot of us had written off. It sure would be great if this was the year Beede FINALLY arrived. The Giants need another homegrown starter, and until the Giants drafted Will Bednar in 2021, Beede was the highest draft pick of any starter still in the organization. But I’m picking Bart for this category for the simple reason that he’s the one sure to get the opportunity. Beede will, too, at least in spring training, because he’s out of minor league options. Ramos and Hjelle are now on the 40-man roster but more likely to debut later in 2022 (if at all). Here’s a new article by Alex Pavlovic on what to expect from Bart this year.

This is a tricky category. I excluded anyone already on the 40-man roster (so no Dubon, Beede, Bart, Estrada, Ramos, Hjelle, or Randy Rodriguez). I focused here on players who could move quickly (college pitchers like Dabovich and Murphy), or are high enough in the system to get all the way to San Francisco this year (Villar just finished a year in Richmond, and Johnson in Sacramento) and/or play positions of need (Johnson plays CF and Villar plays 3B). I picked Johnson because the Giants’ CF situation is still unsettled, and it doesn’t appear that they’re going to sign a free-agent CF. He’s a switch-hitter who’s a speed/defense guy like Duggar and is a couple years younger. I could see both Duggar and Johnson making contributions this year.

The only players eligible for this category have expiring contracts at the end of 2022. In the case of Longoria and McGee, there are team options for 2023, so I’m counting that (i.e., if the Giants pick up their option, they’ve been “extended”). Of these four guys, Belt has the highest upside, but I think McGee is the most likely because of his reasonable 2023 option ($4.5 mil). Longoria’s option ($13 mil) is not going to be attractive for a guy who will be going into his age-37 season in 2023.

Camilo Doval named the NL Reliever of the Month in September. It was Jake McGee in July. Formidable bullpen for postseason.

Wait…I thought we were talking about 2022? Well, we are, but I took a walk today and listened to Roger Munter’s discussion with Melissa Lockard about Giants’ prospects, and this got me dreaming about the future. And since it’s MY column, I can deviate from my own plan if I want to! The rules for this thought experiment are (a) they must currently be in the Giants organization and (b) they will definitely (as to contract status) still be on the team in 2024. For the current players, that includes Anthony DeSclafani (the only player signed to a free agent deal that includes 2024) and younger players who will not have reached free agent status yet (so Duggar, Yaz, Bart, etc.). So here goes: my 2024 vision.

Rotation: Webb, DeSclafani, Murphy, Nick Swiney, and Kyle Harrison (I don’t think Bednar will be in the majors yet, but–who knows?)

OK, that’s it for predictions about the future. At least for today. What do you think? Do you have different picks than I had or “Other” names to throw out there? Let’s discuss. Lefty out.