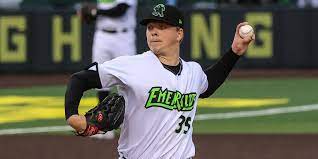 OK, enough recriminations. It’s the third week of January, Fan Fest is exactly two weeks from today, and pitchers and catchers report to Scottsdale in…less than a month (I’ll leave the specific math to Crawnik, who’s better at it). In January, anything is possible for your team, so let’s dream a little bit.

There was good news and bad news in prospect rankings this week. The good news was that Kyle Harrison (pictured above) was named the top left-handed pitching prospect in all of minor league baseball by MLB Pipeline.

The bad news is that Baseball America posted their top-100 list, and the Giants had only two names on it, Harrison (#38) and Marco Luciano (#37, but he was in the teens this time last year). Joey Bart has “graduated” from last year’s list, and Luis Matos dropped off of it after a disappointing season in A ball. Other rising prospects, like Casey Schmitt and Grant McCray, who are both top-five prospects in the Giants’ system, did not crack the list. Schmitt did, however, make the Baseball Prospectus Top 100 list.

OK, enough negativity. The good news is that going into 2023, the Giants actually have homegrown players who are ready or nearly so to make an impact on the major league season. Let’s remind ourselves of the possibilities:

So those are five homegrown players who seem highly likely to make an impact on the 2023 Giants. Further down the list are Luciano and Matos, who were added to the 40-man to protect them from Rule 5 consideration. They both seem too young and too far down the system to be realistic possibilities for this season, but who knows? If one of them puts it together in 2023, they could move quickly because tick tock, the options clock is already running. You could also add R.J. Dabovich, another 2020 draftee, a hard-throwing reliever who spent 2022 in AAA. Finally, Heliot Ramos is still around, still young (23), and this could be the year he figures things out. If he does, there will certainly be room for him in the Giants’ outfield. Lesser names who have been added to the 40-man the last couple of years include pitcher Randy Rodriguez, Keaton Winn, Jose Cruz, and Sean Hjelle. Also on the 40, but not homegrown, are outside acquisitions Isan Diaz, Thomas Szapucki, Tristan Beck, Brett Wisely, and Blake Sabol. From that list, the names to keep an eye on are Szapucki, who is out of options and pitched well for the Giants in a small sample last year, and Diaz, who has major league experience and could provide critical left-handed middle infield depth. Sabol, a Rule 5 pick whom the Giants obtained in a trade, will obviously get a long look in camp because he can’t be optioned.

OK, so we’ve talked about prospects who are close to the majors and could make an impact this season. Now let’s talk more about the major league roster. I was pleased to see that Mike Yastrzemski cracked the Shredder’s Top Ten list for centerfielders on MLBN’s Top Ten Right Now–the Shredder was apparently impressed with Yaz’s defense and power (17 homers even in a down year at the plate) and the possibility that the change in shift rules will help his overall hitting performance. Thairo Estrada played his first full big league season and trailed only Yaz in position player WAR last year. Estrada will be 27 next month, and it’s not ridiculous at all to imagine him continuing to improve.

So if we put all this together with the new acquisitions (Mitch Haniger, Michael Conforto, and the return of Joc Pederson), it is not a stretch at all to say that the following players could hit 20 or more home runs:

It is also not absurd to imagine Crawford, Estrada, and LaMonte Wade Jr. hitting 15 or more. Crawford has hit more than that several times in his career, Estrada hit 14 last year, and Wade Jr. hit 18 in 2021. Oh, and J.D. (Just Dingers) Davis, depending on how many plate appearances he actually gets. I could see him on the over-20 list, too.

The 2021 Giants set a franchise record for home runs, which is something when you consider that guys named Willie Mays, Willie McCovey, and Barry Bonds have played for them. It’s not at all a stretch to believe that they could pass that mark again in 2023. I will also go on record as saying that the long drought of having a 30-homer player (since Bonds in 2004; Brandon Belt came the closest with 29 in 2021) is going to end in 2023…and that at least two Giants will cross that threshold. The fun part is that I can’t predict which two it might be–could be any of Haniger, Conforto, Pederson, or Villar.

Homers are fun. It would be nice to see some big power numbers from the 2023 Giants. They could outslug their scary holes on defense, and the just-OK pitching staff on paper could look a lot better with robust run support.

For your tracking pleasure, bookmark this Opening Day Roster Resource page (hat-tip to channelclemente for sharing this the other day).