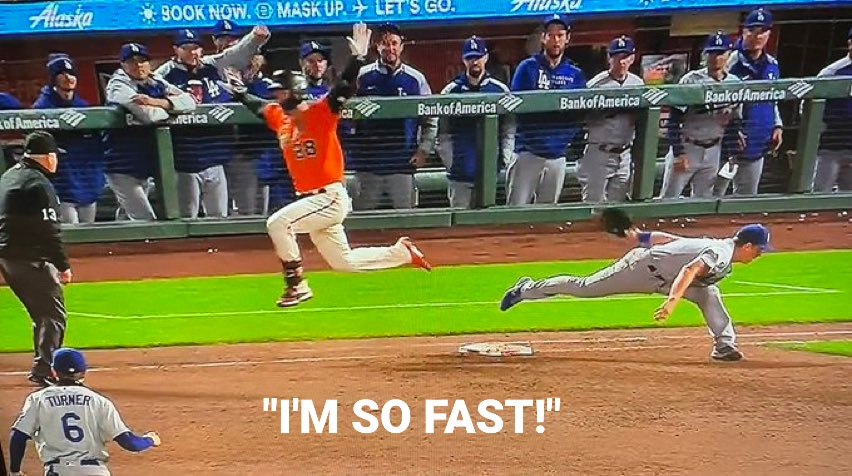 Aloha from the beautiful island of Maui, where we’ve been for nearly a week now. I have a big day of lounging around planned (and OK, watching some college football and the Giants game), so let’s focus just on reveling in last night’s unlikely win rather than recapping the whole week, which mostly, let’s face it, sucked.

There was NO WAY the Giants could win this game. Barry Zito was the weak link in the rotation and had pitched so poorly in his previous start that he hadn’t made it out of the third inning.

The Giants HAD to win this game. If they didn’t, their season was over.

Ooops. That was the 2012 NLCS, also known as the #RallyZito game. Giants fans were swinging from despair to desperate hope. There was no way…or was there?

Let’s try this again, shall we?

There was NO WAY the Giants could win this game. Anthony DeSclafani (let’s call him Tony) has been a good starter for the Giants this season–but more in the first half, and never against the Dodgers. Before last night’s game, in five previous starts against the hated rivals to the south, he’d given up 22 runs in 20.2 innings. You don’t have to be good at math to know that’s really bad. To make matters worse, Tony had left his second-to-last start with an ankle injury from which he is still not fully recovered, spent 10 days on the injured list, and lasted only 3 innings in his first start off the IL. Things didn’t look good with ol’ Tony D on the mound last night.

The Giants HAD to win this game. No, their season wouldn’t have ended on September 3 if they had lost, as in the #RallyZito game. But the game went from a sorta bullpen game to a fully bullpen game for the Dodgers when David Price was a late scratch. In the next two games of this series, the Giants have TBD and TBD starting (rumored to be Sammy Long and Jose Quintana), and the Dodgers have Julio Urias and Walker Buehler, who (checks notes) are both really good. If the Giants couldn’t somehow win this first game when they had an actual starting pitcher and the Dodgers didn’t, there would be a very good chance they’d be swept, three games out of first, never to be heard from again until the wild card game.

And you know what? Tony (let’s call him T-Bone) was great, throwing six scoreless innings, giving up three hits, and striking out five. That was his best start in…well, quite a while. To further cement the legend of #RallyTony, the next man up was, of course, Tony Watson, and while he looked a bit shaky, he ultimately got it done. Then there was Tyler Rogers (I wonder if he’d mind changing his name to “Tony” to fit my narrative), the only guy whose numbers against the Dodgers are even uglier than T-Bone’s. But THIS happened.

[An aside here. MrLefty and BrotherLefty (who is vacationing with us this week) do not care for Max Muncy. Indeed, they have a vulgar little nickname they call him during our family text threads. When Rogers struck out Muncy to end that inning, they were both chanting “Vulgar Name! Vulgar Name! Vulgar Name!” at the top of their lungs. Thankfully the walls here don’t seem to be that thin, but I’m sorry I didn’t get video of this special moment to share with y’all.]

So anyway, this tense, tight game went on and on. Both teams put runners on and couldn’t bring them in. Both teams blew saves, though in Jake McGee’s defense, if Buster Posey had tagged out both runners in a strange play in the top of the ninth, the game would have been over with a 1-0 Giants win. We came to the 11th inning, when Jarlin “Tony” Garcia did a masterful job of pitching around the automatic runner on second and a single, with help from a great play at the plate by Brandon Crawford and Posey. So the Giants had a chance–the Dodgers hadn’t cashed in their automatic runner, the Giants would now get their own and had another chance to walk it off. They loaded the bases with one out, Alex Dickerson grounded out, forcing Mike Yastrzemski at home, and then Posey, who’d looked awful at the plate all night, sent a routine grounder to 2B Trea Turner to end the inn—wait, what?!

BUSTER BEATS THE THROW AND THE GIANTS WIN pic.twitter.com/LK3uD7GJqf

It was close, and there was a replay review, but it was clear that Will Smith, who is, it should be noted, not a first baseman, pulled his foot off the bag right before Buster crossed it. New York concurred, and it was a walk-off win! Well, sort of “walk off.”

The Giants dugout all jumped on Buster when the umpires ruled him safe after review 😂 pic.twitter.com/fr1Z3z7nTW

Buster Posey on the walk-off celebration with his teammates in the dugout: "34-year-old catcher, they knew they needed to be careful with me."

Everybody was really happy.

Just an incredible collection of dorks. Yes, we love them. pic.twitter.com/f78aWzFQAU

And after all that, on #RallyTony day, they won a game they had to win–a game it looked like they had no chance to win.

This Dodgers-Giants series this year…man. We have the Tauchman Robbery Game, the Darin Ruf “Check Swing” Game, and now the Trea “Steve Sax” Turner Game. But at the end of it all, the Giants have a 9-8 lead in the season series after starting it 3-6, with two left to play. Epic stuff.

After the Dodgers took over first place on Wednesday (for about 17 hours, it turned out), MLB had a graphic that they’d clearly been sitting on for months, just waiting for the right moment.

For the first time since April 25, the @Dodgers own the NL West. pic.twitter.com/p2y9bqGvKu

There were a lot of comments in the moment about how perhaps it was a bit much to say the Dodgers “own” the NL West when they had a half-game lead after being out of first place since April. But some alert Giant fans were ready with an “improved” version of the photo last night.

For the first time since September 1st, the @SFGiants own the NL West pic.twitter.com/wNNxJ4PVQC