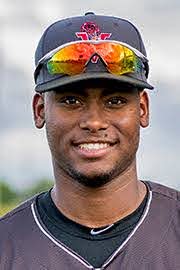 Alexander Canario: most likely to be added to the Giants’ 40-man roster this week

In this strange odyssey known as the Year of Our Lord 2020, the Masters golf tournament is happening this weekend. The NBA draft, usually in June, is taking place next week. Meanwhile, families all over are trying to decide whether or not to have Thanksgiving, and let’s not even go there about Christmas.

With this backdrop, it’s oddly comforting to realize that the baseball offseason rituals are happening more or less on schedule. The qualifying offer deadlines came and went (welcome back, Kevin Gausman!), and the awards have been distributed. This week marks another deadline: November 20 (next Friday) is the date by which teams must add eligible minor leaguers to their 40-man roster to protect them from the Rule 5 Draft that will happen at the (virtual) Winter Meetings in December.

Last year, this milestone came and went and the Giants did nothing. They didn’t add a single minor leaguer to their 40-man roster. As I pointed out in my column around this time last year:

The fact that a player’s (a) available and (b) talented doesn’t mean (c) that he’ll necessarily get picked in the Rule 5 Draft. Since the claiming team must keep him on the 25-man roster the whole season or offer to give him back, you would think they’d focus on grabbing players who are at least somewhat close to being major-league ready.

I also noted that the biggest risk the Giants took then was not protecting Caleb Baragar, who was not a top prospect but was close enough to the majors (having been the starting pitcher in the AAA championship game for Sacramento) to possibly appeal to another team. We all know what happened: The Giants did not lose Baragar in the Rule 5 Draft and he became the surprise rookie of the 2020 summer camp (to which he was not even initially invited) and one of the few real success stories in the Giants’ bullpen. I remember reading, after Baragar had cracked the major league roster and was doing well, that the Giants had agonized over whether or not to protect him and were greatly relieved not to lose him via Rule 5.

I’ve thought this over and read a bunch of articles about this, and I’m persuaded that the Giants will, indeed, protect someone(s) on their 40-man roster this week. Let’s get the easy one out of the way–there is no chance the Giants will risk losing Alex Canario, their #7 prospect per mlb.com. Canario is a 20-year-old outfielder whom the Giants signed out of the Dominican Republic in 2016 for a mere $60,000. He had a fantastic 2019, split between two short-season leagues, and spent the summer of 2020 at the Giants’ summer camp/alternate site. Though he’s not close to the majors yet, he is too talented (future value scouting grade is 50) to risk losing for nothing.

After Canario, the picture gets murkier. There are two other top-30 prospects who are Rule 5 eligible, pitchers Gregory Santos and Camilo Doval. Santos, who came to the Giants several years ago from the Red Sox organization in a trade for Eduardo Nunez, may have more upside and is the Giants’ #17 prospect. On the other hand, he has never pitched above Low-A Augusta, and even then, he made just eight starts in 2019 before injuries shut him down. I don’t think a team is going to pick him because he has no chance of sticking on a 25-man roster for all of 2021. So I’ll say the Giants will not add him to their 40-man roster to protect him, at least not this year.

Doval, the Giants’ #25 prospect, is a right-handed reliever who shot up in the system in 2020. He finished 2019 in high-A San Jose and spent 2020 at the Giants’ Alternate Site, even making a taxi squad appearance on one of the Giants’ road trips. He seems like exactly the kind of guy another team might pick in the Rule 5 Draft. The question is whether the Giants value him more than a roster spot at this point. Given how bad the Giants’ bullpen was from the right side in 2020, I’d lean towards predicting that the Giants won’t risk losing him.

The Giants have a lot of other players who are Rule 5 eligible this year, but since none of those are top-30 prospects, they may not worry as much about losing them. These include long-time system names like infielders Ryan Howard and Jalen Miller and outfielders Heath Quinn and Jacob Heyward. They also include a couple of relievers who were on my MyGuy™ lists in the past, Ryan Halstead and Patrick Ruotolo. Here’s the complete list from a comprehensive article from a few weeks ago by Roger Munter.

As you can see, most of these names register about a 10 on the “meh” scale, although one, it should be noted, was the Opening Day right fielder for the 2020 Giants (SMH). Besides the three we’ve already talked about, the main names of note are Tyler Cyr and Ricardo Genoves. Cyr, like Doval, is a right-handed reliever near the majors. He was Rule 5 eligible last year and no one took him, so the Giants may not worry about losing him that much (he seems to be in the Baragar slot this year–they’ll be happy if they don’t lose him but won’t put much effort into making sure they don’t). Genoves is a young catcher whom the Giants invited to spring training and to the fall instructional league and seem to think highly of, but he hasn’t played above Low-A Augusta, so he’d be an unlikely Rule 5 pick for another team.

So my take is that the Giants will protect three players at most–Canario, Doval, and Cyr–and that it’s even a bit unlikely that they’d add both relievers to the 40-man roster this week. The rest of the list–they’ll take their chances on losing them.  If I’m going out on a limb, I’ll say just Canario and Doval get added.

The Giants, after re-adding Kevin Gausman and signing infielder Jason Vosler this week, now have just one 40-man spot open to add one or more of the above players. So this is likely to be a sad week for someone(s). It could be a rough week for 40-man guys who didn’t crack the major league roster this year (Melvin Adon and Chris Shaw). Or they could cut ties with arbitration-eligible players whom they don’t want to pay that much (e.g., Trevor Gott). There are also a couple of names that may not continue to be a fit, such as Daniel Robertson or Steven Duggar. I’m curious to know what they’re thinking these days about Jaylin Davis, who’s still listed as a top prospect and on the 40-man roster but who reportedly had a very disappointing 2020 season both at the major league level and the Alternate Site. The acquisition of Luis Alexander Basabe may make Duggar or Davis expendable.

We’ll know more by the end of Friday. In the meantime, enjoy the Masters(?) and the NBA Draft(???). Lefty out.