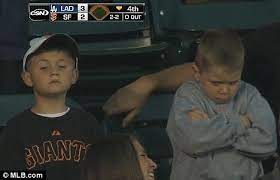 [Editorial note: This is going to be an extremely negative column. If you are easily distressed by negativity and/or are still a Farhan Zaidi true believer, I won’t be offended if you skip this one. I also promise that if things change and he proves all of his detractors wrong–and I hope he does!–I’ll be the first to give him full credit.]

In last week’s column, I said this: “These next seven days have the potential to be insanely exciting for Giants fans or brutally disappointing.” Well, I think we know how that turned out.

The really devastating news is that the Winter Meetings came and went without the Giants making any major free agent signings. (No, Mitch Haniger is not “major.”) Now, some of you less knee-jerk types will remind us that there’s still “a lot of time” and “so many free agents still available,” and you’re kind of right, but kind of not. The “not” part is that, post-lockout and with a new CBA guaranteeing some stability, teams are spending early, often, and a lot–and the biggest names are signing in December, not January or February. Of Jim Bowden’s top 25 free agents, 16 have already agreed to new contracts. There are only nine of the top names left.

Here’s who’s still left as of the time I’m writing this:

You might say, “Well, what about trades?” to which I say, “What about them?” Zaidi has yet, in his 4+ years as head of baseball operations, to make a significant trade, though he’s made plenty of insignificant ones. On what basis would we think we’re extracting Sean Murphy or Ramon Laureano from the A’s, Bryan Reynolds from the Pirates, etc., etc.? We know from the Soto fiasco last July that the Giants are not perceived to have enough talent in their farm system to compete for desirable trade targets (though oddly, that “lack of talent” didn’t seem to be an issue when other teams were raiding our AA team during Wednesday’s Rule 5 draft). And they arguably have even less talent at the major league level.

Before I answer that, we should probably give a nod to what’s gone right. The Giants retained Joc Pederson and signed Mitch Haniger at price tags that look like bargains in today’s overheated terms. The 2023 Giants will be better with Pederson and Haniger than they would be without them. Also, the Giants did not lose Will Wilson in the Rule 5 Draft, and that could turn out to be important if they come up short in the chase for Correa (or Swanson, if they’re even pursuing him, which I haven’t heard).

But that’s the end of the good news. Here are some of the possible missteps and problems the Giants are facing as they try to get someone, anyone to take their money.

As Grant Brisbee put it in his article on Friday:

…time is running out to hit the offseason jackpot, and it’s starting to look like the Giants might have missed their chance. The word “might” is working hard in that sentence, though, because there’s a lot of offseason left. There are chances to get creative.

…With all of the other strong free agents going quickly, the Giants will have to scramble and pivot like few teams before them. There’s still a path to an offseason win, but it’s growing increasingly narrow.

So what is going on–or not going on? I’m obviously not in those meetings or conversations, and neither are you. And every free agent has their own priorities, whether it be going back to the team that drafted them (Judge and Nimmo) or getting away from that team (DeGrom, Xander Bogaerts) when some other team offers them way more money. Some players have wives or parents they’d like to please as to location. We don’t know what’s going on behind the scenes.

But I’ll speculate a little bit. If this offseason doesn’t get salvaged in some way, it’s a combination of:

Four years later, it appears that nothing has changed. Zaidi hasn’t learned or grown with the job.

As Brisbee said, there is still time and there are several scenarios by which the Giants could still salvage a decent-to-good offseason. I hope that in the next week or two I get to write about those, instead. But right now I feel existential dread. Until I see something different, I fear that our beloved Giants are doomed to irrelevance and futility for many years to come. Until I see something different, I believe that Farhan Zaidi is the barrier to a Giants turnaround, not the instrument of it. I don’t want to think that, and as I said at the top, I’ll be thrilled to be proven wrong. Lefty out.