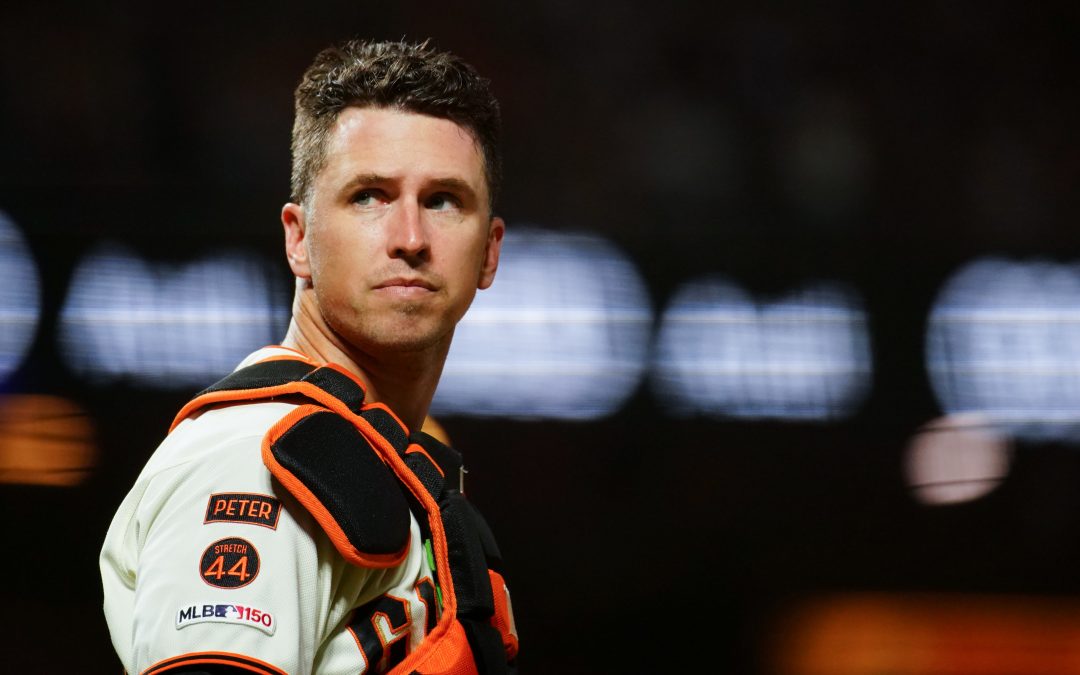 “From an early age, he saw the benefits in working hard on the basics. He’s done that with baseball, with academics, and with his personal life. We’re proud of who he is today.”–Demp Posey, talking about his eldest son, in Andrew Baggarly’s A Band of Misfits

I miss him so much already.

I was in my campus office last fall when the texts started coming: Buster Posey had announced his retirement at the age of 34. I cried. I wasn’t ready. I thought we had a couple more years with him, especially after his triumphant All-Star/Comeback Player of the Year/Silver Slugger 2021 season.

The first thing I said, in a text to my siblings: “We didn’t get to say goodbye.” Well, today we do. Buster and his whole family–his wife and their two sets of twins, his parents, his siblings–will be there. Various former teammates, their identities a secret and a surprise even for Buster, will be there. Fans have been told to be in their seats by 3:15 so as not to miss the festivities, and NBCS-BA will televise it all. It will be a great day. It will be a sad one for us fans, too.

There have been stories and interviews with Buster all week, in preparation for his big day.

Posey’s interview on the Murph and Mac show (KNBR)

Duane Kuiper’s memories of Buster, who became a friend, on the Giants Talk podcast

Kerry Crowley’s story on Buster Posey, Little League coach (how cool is that for those kids?!)

Amy G’s interview with Buster this week (this is a terrific 12 minutes, BTW)

The first time I saw Buster play was in Sacramento in August 2009, when the Fresno Grizzlies came to play the River Cats (then the A’s affiliate). He batted third, caught, and went 1 for 3. Just a few days later, he was called up to the majors for the first time. The second time was May 30, 2010, Buster’s second game after being called up to stay. He had three hits (two doubles) and an RBI.

My two favorite in-person memories are bookends. One was during spring training in 2012. I was so happy to see him back at all after the awful injury he’d sustained in 2011. At our first game, which was at Salt River Fields at Talking Stick in Scottsdale, he hit a mammoth homer to dead center. It just felt like all was right with the world again. The other one was on October 3, 2021, in what turned out be his last regular season game. The Giants won 8-0 to wrap up the NL West title, and Buster got his 1500th–and final–career hit in that game.

As for games I just watched on TV, here are a few favorites. Brian Wilson struck out Nelson Cruz to clinch the 2010 World Series championship, and 23-year-old rookie Buster was just losing his mind, waving his arms and jumping up and down. A few minutes later, he calmly did an interview with Ken Rosenthal, talking about Tim Lincecum’s epic performance in that game. After he finished, Joe Buck said to Tim McCarver, “That is a very impressive young man.” “He certainly is,” McCarver agreed.

I’ve said here a number of times that the 2012 team was my favorite of the three championship squads. I’m a writer, and I love a good story. There was so many great ones on that 2012 team–the redemptions of Barry Zito and Pablo Sandoval, the triumph of Ryan Vogelsong, the out-of-nowhere heroics of Marco Scutaro, the orations of Hunter Pence–but the best one of all was Posey, not only returning from a career-threatening injury to win a batting title, the NL MVP award, the Comeback Player of the Year award, and another World Series, but also taking the team on his back after the demoralizing loss of batting leader Melky Cabrera to a PEDs suspension. While Posey had many heroics in that postseason, a couple of which I’ll get to in a minute, my favorite memory is of him quietly handing Bruce Bochy the ball in the scrum after the Giants won the World Series.

Three more and then I’ll stop because I could go on for days. I still remember the throat-clutching terror I felt when Prince Fielder was barreling toward home in Game 2 of the 2012 World Series. We had gotten Posey back after a terrible injury on a very similar play, and…Prince was a BIG guy who would not hesitate to blow a catcher up.

No problem, as it turned out. Look at this great tag.

Then there was the 2014 World Series. This was not Posey’s best at the plate. He hit no homers in that postseason and only .154 in the World Series. Unlike 2010 and 2012, he had to handle a pitching staff that was not especially deep. Only Madison Bumgarner among the starters had much success, and the Giants rode Yusmeiro Petit and Jeremy Affeldt to fill in gaps that aging starters Ryan Vogelsong, Tim Hudson, Jake Peavy, and Tim Lincecum couldn’t handle. Nonetheless, it was Posey who guided Bumgarner through his historic World Series performances, especially the transcendent five-inning save in Game 7. I will never forget Buster nearly collapsing from exhaustion after it was over.

Okay, you knew I had to end with this one–probably Buster’s most memorable home run in his career. A winner-take-all Game 5 in Cincinnati in 2012. Matt Cain facing Giants nemesis Mat Latos and them both grinding out four stressful scoreless innings. Then came the fifth inning and the Buster homer we’ll never forget. With no disrespect to TBS’s Brian Anderson, who also called it well on TV, take it away, Jon Miller.

For a quiet, low-key guy, Buster was a pretty good performer in the various commercials he did. It was hard to pick just two, but here are my favorites.

“Honey, you’re embarrassing me in front of Buster Posey.”

This Week in Giants Baseball

I think they miss Buster, too. Seriously. The pitching staff started off well and looked like they’d be so good this year, but they’ve unraveled this week. Injuries, COVID, Dodgers–sure. But you can’t lose the gravitas and preparation of a Buster Posey and not feel it. It was good to see such a strong bounce-back start from Alex Cobb last night; I thought he looked terrific despite that Harrison Bader two-run homer (and what was UP with Bader pimping it like that on a Friday night in early May? SMH). Congrats to Sean Hjelle for making a successful major league debut. He and Joey Bart were 1-2 in the same 2018 draft class, and I’m guessing they’re friends and that it made Hjelle feel good to get to throw to him last night. Hjelle, as they reported on TV, has either tied or broken the record for being the tallest guy to ever play in MLB. Also, John Brebbia is quietly having a really good season so far, and with Jake McGee being practically unusable and Camilo Doval not being entirely trustworthy, we may see Brebbia climbing that bullpen depth chart.

The Giants have gone 1-5 since the last OOLF posted, and they are 0-for-Mustache-May. This has been the worst week of Giants baseball since the early part of the shortened 2020 season. That felt worse because the Giants were actually 8-16 at their lowest point, and this year, the bad week comes after a very good April. Should we panic? No. They really have been shorthanded, there is still lots of talent on the roster, and there is plenty of season left. Should we worry? Maybe. Among other things, the NL West looks like it’s going to be tough from top to bottom. The Diamondbacks and Rockies aren’t going to roll over and die for the Dodgers and Giants like they did last year, and the Padres are doing well, especially considering they don’t have their superstar shortstop for awhile. There may not be much margin for error, not just for winning the division but for getting a playoff spot in the expanded wild card round.

Enough of that, though. It’s Buster’s Day. Thank you, Buster, for so many great memories. You made multiple generations of Giants fans happier than they’d ever been. And as the quote from Buster’s father at the top highlights, you were and are an even better person than player. It’s been a privilege to watch your whole career, and it will be a long time before we all stop missing you.

We all need a Buster Hug. Lefty out.