The All-Star Break: Where the Present Meets the Future 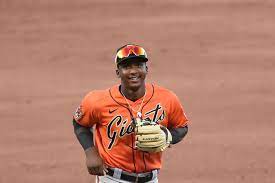 One could quibble over whether the “halfway point” of the baseball season is when a team hits the 81-game mark (as the Giants did a week ago) or the All-Star break (this weekend). As this year’s schedule falls, the two dates are close enough in time that it’s not really worth arguing about, but I already did a “midterm grades” post on the 2021 Giants last week. So for this column, I decided instead to focus primarily on what this All-Star weekend portends for the immediate and distant future of the San Francisco Giants.

The Giants had three players named to the NL All-Star team, but two of them will not play–Buster Posey is injured and Kevin Gausman is scheduled to start tomorrow for the Giants. So it looks like we’re all going to be rooting for Brandon Crawford, who reminded us last night why he’s an All-Star again at 34.

Posey has been named to seven All-Star teams, and this is Crawford’s third, but it’s a first time for Kevin Gausman, and that just reminds us what a great job the Giants did with finding, signing, retaining, and polishing Gausman to the point that if it weren’t for the existence of Jacob DeGrom, he’d be a leading candidate for the NL Cy Young Award at this point. In any event, Gausman is the undisputed ace of the Giants, and no one, including probably Gausman himself, saw that coming back in 2019.

This is a game held during All-Star weekend in which teams’ top prospects are showcased. The Giants’ participants are Marco Luciano (their #1 prospect, per MLB.com) and Heliot Ramos (#3). I have two comments about this.

First, Ramos has represented the Giants in two previous Futures Games (2018-2019). I think it would have been nice to showcase Luis Matos or Kyle Harrison (for example), instead. In fact, while those two names were the first to come to mind, you could make arguments for others, as well. The Giants’ farm system is deep and interesting. We knew that going into the season, but it’s turned out to be even deeper and more interesting than we thought. Who saw the stellar season by Caleb Kilian coming? Or Ryan Murphy? Or RJ Dabovich? Or Brett Auerbach and  Wil Jensen, both signed as undrafted free agents last year? Or Armani Smith? I could go on. I was surprised to see that Luciano actually hadn’t played in a Futures Game before, but I guess that’s a fallout of 2020. After a slow start, Luciano has been as sensational as advertised, leading all of low-A with 14 HRs. It’s worth remembering that he’ll still be a teenager until September 10.

Second, Ramos isn’t having a very good year so far. Remember when we were quietly grumbling because not only did Ramos not make the major league roster after a sizzling Cactus League performance, he wasn’t even assigned to AAA Sacramento where we could keep an eye on him? Well, it seems that the decision-makers knew more than we did because Ramos hasn’t set the world on fire in AA Richmond. His .731 OPS with 8 homers is not a disaster, but it doesn’t quite scream “top prospect on the rise,” either. Ramos is showing some signs of life in July so far (.281/OPS .906, 3 HRs) after a .155 June, so we certainly shouldn’t write him off at age 21. But maybe someone else deserved a slot at the Futures Game this time.

We all know about the “Rule 5 Draft” that happens during the winter meetings every year, but did you know that the draft of U.S.-based first-year players, usually in June, is the “Rule 4 Draft”? I didn’t. Anyway, the draft was postponed to this weekend, I presume to give scouting departments more time to gather information as the baseball world emerges from its COVID fog. The first round begins tomorrow (Sunday, July 11) at 4 p.m. Pacific time and the draft goes through Tuesday.

The Giants’ first-round pick is at #14, a result of having a good-enough record to make the playoffs last year (same record as the Brewers and the Astros, who did make the playoffs) but still missing the playoffs. Just ONE more win…grrrrrrr. But I digress.

Anyway, whom might the Giants select at #14, and what might their overall draft strategy look like? I perused a few mock draft articles and found a few predictions.

You get the idea. Cowser and Frelick are ranked 10-11 respectively on MLB.com’s draft board, so they might not get to the Giants at #14. Chandler is ranked #21. While I’m intrigued by the idea of the Giants trying to find their own version of Shohei Ohtani (i.e., Chandler), I’m also not going to be surprised if it’s not any of the guys in these mock drafts. The various experts predict that the Giants will continue to privilege position players at the top pick (current Dodgers reliever Phil Bickford was their most recent first-round pitcher selection, and that was back in 2015), but the ESPN Insider (Kiley McDaniel) mocks a college pitcher from Alabama named Dylan Smith to the Giants in the second round.

Honestly, at #14 I’m having a hard time paying much attention. Draft picks are interesting, but with the Giants in first place right now and the trade deadline just 20 days off (it’s July 30 this year), I’m more focused on the present than on the distant future.

The buyers/sellers lists are becoming remarkably clear given that it’s only July 10. At this point, it looks like three of the five NL playoff teams will come from the NL West, the Brewers have opened a gap in the NL Central, and the Mets look like the favorite to win the NL East (though I’m not yet writing off the Braves, who at 43-44 are only 4.5 games out of first). As for the AL, it looks like Red Sox-Rays-White Sox-Astros-A’s in some configuration, with possibly the Blue Jays, Yankees, or Mariners making a second-half run but probably not.

Some of the more prominent sellers appear to include the Cubs (big change from two weeks ago, before they went on an 11-game skid at the exact same moment the Brewers got hot), the Twins (who were expected to be good, are not in fact good, but have some attractive trade chips), and the always-open-for-business Pittsburgh Pirates.

The Giants’ needs–if they actually have any, which is arguable when they still have the best record in MLB–are relief pitching (a legit back-end closer), starting pitching, and a right-handed power bat, not necessarily in that order. The most recent Baggs and Brisbee podcast focused on the trade deadline, and they both felt that starting pitching should be the highest priority, noting that adding a starter via trade could also strengthen the bullpen by pushing someone (Long? Beede? Sanchez? Webb?) into relief work. They presume that the front office will mainly focus on players controllable beyond this season (not rentals). They also speculated that the Giants would prefer to trade off their 40-man roster, so someone like Tyler Beede or Alexander Canario could headline a package. Brisbee had an interesting piece a few days ago about the Giants’ 40-man roster and how it is rapidly about to become a (good) problem: Injured players like Brandon Belt, Evan Longoria, and Tommy La Stella are expected to return before the end of the month–even Reyes Moronta may re-emerge–and the Giants may have to contemplate losing players they don’t want to lose.

A big part of the Zaidi regime’s DNA is finding undervalued pieces from other systems (Mike Yastrzemski, LaMonte Wade Jr., etc.) or on the waiver wire–but jumping on those opportunities requires some 40-man roster flexibility, and the Giants really don’t have much of that right now–victims of their own success, you could say. So, as Brisbee put it, do you pass on the next Donovan Solano or Alex Dickerson out there out of loyalty to the current Solano/Dickerson…neither of whom is having a good year at all? It’s a fascinating point of this front office’s tenure. A lot of their reputation comes from the success of guys like Solano and Dickerson, so you’d think there might be some sentimental attachment and some patience. But is sentiment going to drive this bus? We don’t know, but we’ll find out pretty soon. (On a side note, one trade rumor ties the Giants to Pirates’ All-Star 2B Adam Frazier. Even if that doesn’t come to anything, it suggests what a disappointment the combo of Solano/La Stella/Mauricio Dubon have been this year.)

OK, Back to the Present

The Giants have two more games before the All-Star break, both at home vs. the Nationals and both starting at 1:05 p.m. The Giants will have their two best starters, DeSclafani and Gausman, facing the venerable Jon Lester and Erik Fedde, the latter of whom gave the Giants fits in D.C. a few weeks ago (5 scoreless innings, 7 Ks). The good news is that, thanks to last night’s win and the Dodgers’ loss, the Giants will go into the All-Star break no worse than tied for first place in the NL West. If things go really well, they could continue to hold the best record in baseball.

Today’s Facebook memories reminded me that it was five years ago today that Madison Bumgarner pitched a gem on ESPN Sunday Night baseball, taking a no-hitter into the eighth inning, and the Giants went into the All-Star break with the best record in MLB. Though the Giants did end that year with a winning record, beat the Mets in the wild card game and made the playoffs, the team went into an awful second-half tailspin that was downright disorienting and somewhat traumatizing–especially given that they haven’t had a winning season since. This, I believe, is why many Giants fans, five years later, are waiting for the other shoe to drop on the 2021 Giants.

But maybe it won’t. This is a good team, a balanced team, a deep team, doing most things well. It doesn’t feel like a fluke, but whether it’s sustainable may depend on health and continued success of the next-man-up depth that’s been carrying them all season. It’s also a team that, unlike the 2016 version, is led by people who aren’t hesitant to make changes if something is not working. Cases in point: Mauricio Dubon, the Opening Day CF, is in AAA, and half the bullpen is different (two guys traded, one guy injured, one guy in AAA). So I’m hopeful, ready to enjoy watching the draft and the Home Run Derby, and eager to see how the next few weeks play out, as we move from the present to the future. Lefty out.