The Future is Bright–But the Present is Awesome 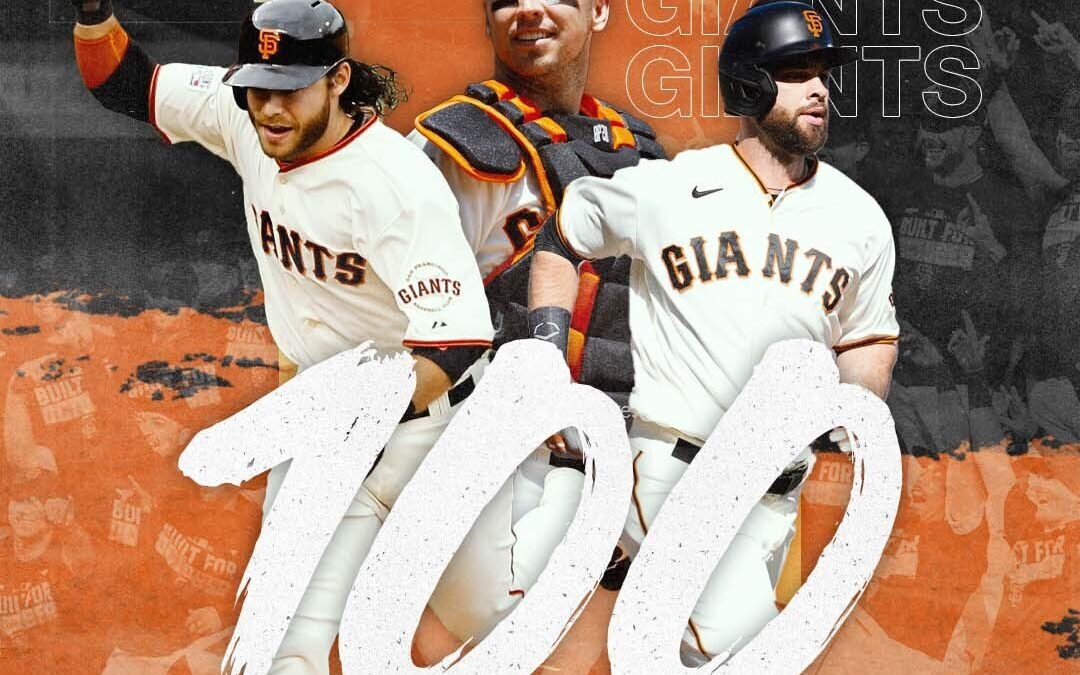 I hopped around Twitter last night, saving various versions of a “100 Wins” graphic. I saw at least 4-5 different ones. One of them had Kris Bryant as the center photo, and I mean–we all love KB so far, but–c’mon, the one I put up top is the one it had to be. Buster and the Brandons.

To say that September 24, 2021 was an epic day for the Giants organization is an understatement.

The Giants won Game 100 as they won so many of the previous 99–with the long ball. Here’s a fun clip of all four homers they hit last night (all by lefty hitters, as it happened).

It’s worth taking a minute to look at the four guys who hit homers last night.

These are the 2 best power hitting teams in Giants history. pic.twitter.com/GNiFSvuLvO

Castro & Doval: Where the Present Meets the Future

It’s fitting that the winning pitcher in the 2021 Giants’ 100th victory was a 22-year-old rookie getting his first major league win. Kervin Castro has been in the pipeline since he was signed as a teenager out of Venezuela in 2015. Due to injuries and COVID, he actually hasn’t amassed that many professional innings until this year, and before 2021, he hadn’t even pitched for a full season team (short season Salem-Keizer A ball in 2019 was his highest level). Baggs and Brisbee talked about him in their latest podcast, and they noted that unlike some Venezuelan players, who were stuck in a Courtyard by Marriott in Scottsdale when the pandemic hit, Castro had family in Orlando, Florida, and he was able to travel there. There was a critical mass of Venezuelan minor leaguers in the Orlando area during that period, and they played in pickup games to stay in shape. When Castro arrived at the Arizona instructional league last fall, observers noted that it seemed like he hadn’t missed any development. He was added to the 40-man roster in the offseason to keep him out of the Rule 5 Draft, began the season with AAA Sacramento, and now here he is, pitching multi-inning stints to spare a gassed bullpen. In 6 games (9.1 innings), he’s given up 9 hits, 0 runs, struck out 8, and ZERO walks. If the Giants are compiling a Division Series roster, is he on it? Ask me in a week. Is he a big part of their plans for 2022 and beyond? Oh, yes.

Camilo Doval is a tiny bit more polished than Castro. He was also signed as an international free agent in 2015, but he’s two years older than Castro is (a venerable 24 years old). Like Castro and Gregory Santos (obtained from the Red Sox in the 2017 trade for Eduardo Nunez), Doval was added to the 40-man roster last winter despite never having pitched above high-A ball (though he did pitch at the 2020 Alternate Site). Doval had a rough introduction to the major leagues in May when the Giants were scrambling for answers to what used to be a really bad bullpen. But since his most recent return from AAA on Sept. 5, he’s appeared in 10 games (9.1 IP), given up 0 runs, 4 hits, 3 walks, and struck out 10. Most notably, he pitched out of game-on-the-line bases-loaded situations against the Dodgers and the Padres. He’s rapidly moved up the depth chart for a bullpen that is suddenly leaking oil, and who would you rather have right now–Doval or Zack Littell? Will he be on a postseason roster? Seems like a no-brainer unless he has a major meltdown(s) over the next week. But he doesn’t really seem like a “major meltdown” kind of guy, does he? Health permitting, Doval may be the Giants’ closer as soon as 2022. Maybe 2021(!).

Assistant pitching coach J.P. Martinez had to check and make sure Camilo Doval has a pulse 😂 pic.twitter.com/k4nBL5V5AF

A-Ball Champions: We Own the West!

It was already ridiculously awesome that the Giants won their 100th game last night. The high-A and low-A championships of the Eugene Emeralds and San Jose Giants just added to the sense that Sept. 24, 2021 may be looked back upon as the turning point day for the Giants of the ’20s. The Little Giants’ triumph–a three-game sweep over the Fresno Grizzlies–was arguably even more impressive in that their best players were promoted to Eugene midseason. Indeed, the Emeralds’ championship clincher was won by starter Ryan Murphy, and the big hit was a homer by Marco Luciano, both of whom began the year with San Jose (and presumably will get TWO rings, right?). Other notable Emeralds were Ismael Munguia (HaakAway’s ExclusiveGuy™), who won the batting title in the High-A West league and went 12 for 19 (!!!) with two homers in the four-game playoff series, and Brett Auerbach, who also started the season with San Jose, homered last night, and finished the year with a .907 OPS across two levels. Auerbach was an undrafted free agent in 2020 out of Alabama. This year he played every position except SS and 1B. Remember that name. Oh, and Ryan Murphy? Between two levels, he had 164 strikeouts in 107.1 innings (!!!) and he had a WHIP of under 1.

As for San Jose, the last time they won a league title was 2010.  Their starting pitcher was another 2020 draftee, Nick Swiney, throwing to his North Carolina State batterymate Patrick Bailey (2020 first-round pick). We know about Swiney, Bailey, and Luis Matos (who drove in two runs last night and hit a homer), but here’s a name you may not know as well: San Jose closer Cole Waites. Waites, an 18th round draft pick in 2019 out of West Alabama, had 31 strikeouts in 13.1 innings across two levels (rookie and low A) against just four (4) walks, ERA of 0.68, WHIP of 0.53. Remember THAT name, too. In the Baggs/Brisbee podcast (which was recorded yesterday morning), Baggs was musing “What if the Giants surprised everyone by bringing up someone from the minors for the postseason?” I was listening and thinking, “Say Cole Waites. Say Cole Waites.” Baggs: “For example, Cole Waites.”

Now, I don’t really think the Giants are going to bring up Cole Waites from low A to pitch in the playoffs. It’s a stretch to even think that Doval or Castro could be on a postseason roster. But Waites seems like a talent who could move fast, and he’s older than Castro already (23).

See what I mean? The future is so bright you need sunglasses to even contemplate it.

Here’s Waites, getting the last out for the championship.

Tonight’s final out. A fitting end for this pitching staff to clinch a championship with a strikeout. https://t.co/9oD3njrWsE

Today I’m taking a break from worrying about if the Giants win the NL West. I hope they do. I think they can, but if they don’t, there’s no shame in winning 100+ games when you were picked to finish fourth and making one of the best collections of talent ever assembled on a baseball team sweat it out until the very end. I’m a happy and proud Giants fan today, and I’m looking forward to a bright and entertaining future. Well done, all!  Lefty out.

Oh. Today’s game begins at 5:10 p.m. and features Anthony DeSclafani vs. Jon Gray. We need this one. We need ALL of them.