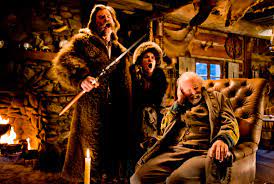 I was so sure that the Giants would be on an eight-game losing streak when I drafted this column that I fell asleep last night thinking about movie and TV titles that involved the number eight: “Eight Men Out,” “Eight is Enough,” “Eight Heads in a Duffel Bag,” and, the most recent, “The Hateful Eight,” which I saw and then announced to MrLefty that there would be no more Quentin Tarantino movies in my future. Too much violence. Too many exploding body parts. Too much blood.

Kind of like how things went for the Giants in August (10-17, with one ugly loss after another trying to out-do the previous ones). But September is off to a better start!

As most of you know, I’m about halfway through a trip to Europe. This part of the trip is a nine-day Viking Ocean Cruise that started in Venice and will end in Athens. On a cruise like this, you start chatting with people, and yesterday we met a friendly couple from Auburn, Alabama. As one does, we started talking sports and baseball (they’re Cardinals fans, having grown up in that region), and the guy said, “It seems like the Giants are very good except for the years that they’re not.” That’s good knowledge.

Yeah. Very good except when they’re not. Three World Series years followed by three non-playoff years. And in this 2021-2022 odyssey (important to give a nod to Homer when one is in Greece), the Giants have gone from very good to…not.

Despite winning their first September game, the 2022 Giants will not meet Farhan Zaidi’s stated goal of “playing meaningful baseball in September,” unless you count their possible opportunities to play spoiler against the Phillies, Padres, and Brewers. I don’t think that’s what Zaidi meant when he said that. It’s time to move on from 2022. No need for ideas about how to “fix” the 2022 Giants, too early for real post-mortems. What do the Giants need to do, especially now, to prepare for better things in 2023? I have a few ideas.

The most important names on this list are Logan Webb and Camilo Doval. Those are young arms that you hope to ride for years to come. Webb should get extra days of rest when available, and he doesn’t need to pitch the seventh inning or beyond any more this year. Doval should be used prudently and sparingly.

Another name that belongs on this list is Joey Bart, who does not need to rush back from the concussion protocol. Beyond that…eh. I’m sure they plan on having Thairo Estrada, Austin Slater, and Mike Yastrzemski next year, and there’s no need to push any of them in September, but as “younger” (or less experienced) major leaguers, I’m not sure they need rest more than reps.

Give players who might help you next year plenty of opportunities

Names that come to mind in this category include J.D. Davis, David Villar, and New Guy Louis Brinson. Maybe Bryce Johnson, maybe a couple of AAA relievers. The list isn’t long or especially impressive, but one of the most important possibilities to consider is Heliot Ramos. How much could it hurt to bring him up and let him play everyday for a few weeks? There are professional coaches whose job it is to answer that question, but the point is that it seems important to amass at least some preliminary data about these players that could help you to approach the offseason.

For example, if Davis and/or Villar look like they could keep 3B warm for top prospect Casey Schmitt next year, maybe that helps them decide about picking up Evan Longoria’s option. If a reliever or two shows you something, then maybe that’s one fewer guy you have to go out and find during an offseason that should/must involve a massive overhaul of the bullpen.

There are two subcategories under this heading. One is players who almost certainly will not be back next year. Brandon Belt is at the top of this list, but it could also include Longoria, Wilmer Flores, Dominic Leone, Joc Pederson, and Carlos Rodón. Now, I’m not saying that none of those guys should play or pitch in September (Belt’s season is over), especially when they’re auditioning for new contracts next year. But Rodón can go five or even skip a start so that someone like Sean Hjelle or Tristan Beck can come up from AAA and make a start. Longoria can just DH so that Davis and/or Villar can get reps at 3B. And so forth. This list also includes newer additions such as Scott Alexander and Alex Young.

The second subcategory is players who may or may not be on the team next year and you already know what you need to know about them. Tommy La Stella is a good example of this. My guess is that they will not DFA him, might try to trade him, but if he’s still on the team, they’ll certainly let him come to camp and see how healthy he looks before just eating the $11.5 million he’s scheduled to make next year. Alex Wood is another example. He’s under contract for next year, he is what he is, and you don’t need any more information about him. Tyler Rogers, too.

I’m not talking about the list of minor league free agents that they might want to fish out of the dumpster this winter. They’ll do that anyway. I’m not even especially talking about specific free agents or trade targets. There will be time for that.

I’m talking about identifying and prioritizing the team’s biggest needs for next year. Last year, it was obvious: the rotation. They only had one starting pitcher returning (Webb), and most of the rest of the roster was already set, given their stated desire to “run it back” with the guys who won 107 games and the NL West last year.

Next year…well, they need a lot. Grant Brisbee just published an article arguing “not so fast” on assuming that the Giants don’t need to shop for starting pitchers next year, considering they have five under contract already, and that assumes (a) that Rodón is leaving and (b) that Kyle Harrison will not be ready to start in the majors at the beginning of 2023.

Brisbee makes some good points, but I’d say that spending money on free agent starters is not a high priority given the rest of the shopping list, which should include:

They also need to make decisions about players such as La Stella, Rogers, LaMonte Wade Jr., Luis Gonzalez, Zack Littell, and Jarlin Garcia, all of whom are under contract for next year, but none of whom are certain to be on next year’s team.

More generally, the Giants also need to prioritize adding pieces that are younger, more athletic, and can play better defense.

[Brisbee also just published an article predicting that the 2023 Giants could look awfully similar to the 2022 Giants, and no one wants to hear that right now.]

Assess when and how the minor leagues might produce a pipeline

This is an important exercise that also currently pretty depressing. Unless you’re really excited about Hjelle, Beck, Isan Diaz, Johnson, or Ramos, there’s not much help coming right away. (There are also a couple of relievers in Sacramento, namely RJ Dabovich and Cole Waites, who are only a short distance from the majors.) However, there are players such as Schmitt, Harrison, Vaun Brown, and Will Wilson who are currently in AA. It’s not a stretch to say that they could start next year in AAA and make a big league debut at some point next season. Right behind them are guys in high A, especially Marco Luciano, Grant McCray, and Luis Matos, who could be knocking on the door from AA or AAA by the end of 2023. No, probably none of those guys will contribute much to the fortunes of the 2023 team, but they and others (Carson Whisenhunt!) will inch closer. It makes a difference in terms of the kinds of players the Giants might acquire in the offseason.

It’s important to offer the caveat under this point that it’s very hard to guess at minor leaguers’ developmental time lines, and it’s even harder considering the COVID interruptions to college and pro careers. However, the Giants do need to consider things such as “Will we have a mostly homegrown rotation in 2024?” before signing free agent starters to deals of any length.

It’s been a disappointing and sad year for the Giants and their fans. When Curt Casali, who always seemed like a great guy and was an important part of the magical 2021 run, is politely dissing the Giants from Seattle, you see how much of a bummer the whole situation has been for the players. Even Pederson and Webb, who are still here, have been candid about the bad “vibe” around the club during its free fall.

Honestly, it’s hard to have much optimism about next season for a number of reasons we’ve all discussed at length. At the same time, I felt that way after the 2020 season…and then I was more surprised than I’ve ever been in my many decades as a Giants fan. So keep hope alive because it’s all we’ve got.

Going back to Monday when we left Italy, we’ve been in five countries in six days (the others are Slovenia, Croatia, Montenegro, and now Greece, where we’ll be for the rest of our trip). It’s fun but a little disorienting.  For you fans of the series “The Durrells in Corfu,” we took a Corfu walking tour this morning and found a garden dedicated to Laurence and Gerald Durrell, the two most famous members of the Durrell family.  Lefty out. The Leftys in Corfu