The Most Exciting Play in Baseball 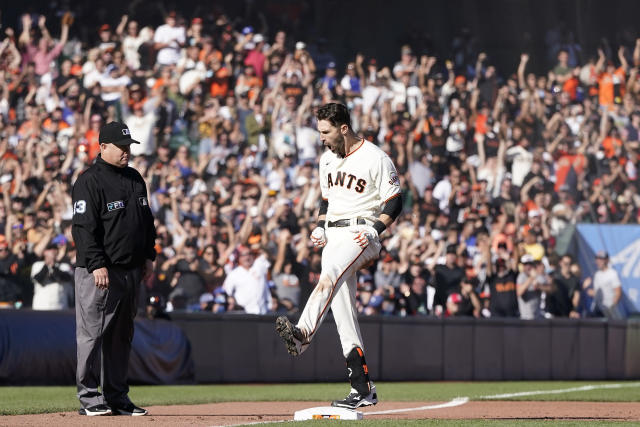 It’s the Saturday before Christmas, major league baseball has been shut down for weeks due to the owners’ lockout of the players, and– I got nothing. But the biggest sports news of the week–yes, bigger than COVID cancellations in the NFL–was Stephen Curry’s record-breaking three-pointer at Madison Square Garden on Tuesday.

It took Brian Anderson (who was calling the game for TNT) a minute to work in the phrase “stands alone,” which of course reminds me of Duane Kuiper’s iconic “Bonds stands alone” call after home run #756 in 2007. Beyond the obvious and deserved accolades for Steph, it was immediately noted that the Bay Area has been witness/home to some of the most impressive individual records in sports, such as Jerry Rice’s receptions and Rickey Henderson’s stolen bases. OK, Steph is an awesome athlete and person, and the record is amazing, but…it’s not baseball. So, with a hat-tip to MrLefty for the concept and some of the tidbits I’m about to share, let’s riff on Steph’s record and talk about the most exciting play in baseball: the triple.

Did you know there’s a glossary on MLB.com? Well, now you do, and here’s what it says about the triple:

Often called “the most exciting play in baseball,” a triple occurs when a batter hits the ball into play and reaches third base without the help of an intervening error or attempt to put out another baserunner.

Triples are almost exclusively hit by faster players because Major League defenses are usually able to get the ball back to the infield before a slower runner can attempt to take third base. Also, triples are more likely to occur on balls hit to the right side of the field, because the throw from right field to third base is tougher than the throw coming from left field to third.

Because of the nature of a triple — with the batter covering three bases, or 270 feet — there is almost always a close play at third base. Stand-up triples are very rare.

As the Wikipedia entry about triples explains, they are rare in baseball for both practical and strategic reasons. Practically speaking, the ball has to be hit to the right spot (almost always to the right/right-center side of the outfield) and the runner has to be fast enough to get to third. Strategically, third base coaches and base runners will frequently settle for doubles, which put the runner into scoring position already, rather than risk being thrown out at third (you’re never supposed to make either the first out or the third out at third base). Most of the single-season and career triples records were set in the dead ball era (around 1900-1919) or started even earlier (late 1800s). Ballparks tended to be huge back then, so homers were rare and triples were more common than they are now. The two most famous players on the all-time triples list are Ty Cobb and Honus Wagner, who are second and third, respectively. There is no active player who has even 100 career triples.

Triples are fun because they are exciting to watch (usually involving a well-hit ball and a really fast runner) and because they can be strategically important in a game, especially if there are fewer than two outs. But they really get entertaining when someone you wouldn’t expect to hit one does so. Here’s one of my favorites, non-Giants category. This was in July 2010 after #ForeverGiant Bengie Molina was traded to Texas to make room for some rookie catcher. He shocked and delighted everyone by hitting for the cycle. Molina was never a fast guy, and this was the final year of his career, but he got it done.

I mean…”Pigs have flown in Boston, Massachusetts?” That’s a little cold, but–LOLOLOL.

When MrLefty suggested this topic, the only stat I could come up with from memory was that Angel Pagan holds the single-season record for triples (15 in 2012, breaking a Willie Mays record) by a San Francisco Giant.  The all-time single season record for triples by any Giant is held by Hall of Famer George Davis (27 in 1893). As for career records, most individual batting records are held by either Bonds or Mays, except for two held by “Silent Mike” Tiernan, who played for the New York Giants from 1887-1899 and holds the franchise record for both triples (162) and stolen bases (428). I think it’s fair to guess that ol’ Mike was a fast guy because that’s a lot of productivity in just 12 years. (Tiernan actually was a very good baseball player for his era. He originally was signed as a pitcher, and he led the NL in home runs in 1890 and 1891. He also is one of the few players in history to score six runs in a single game, which he did in his rookie year.)

October 3, 2010 (hat-tip to South City Jim for reminding me about this one): Just as on October 3 of this year, the Giants needed to beat the Padres at home in Game 162 to win the NL West and avoid a tiebreaker game the next day. Matt Cain couldn’t get it done that Friday, and neither could Barry Zito on Saturday. That left it up to Jonathan Sanchez, having his best year and a great September, who had famously predicted midseason that the Giants would win the West. Sanchez not only pitched six scoreless innings that day, but he also started the scoring in the bottom of the third by hitting a triple and then scoring the first/winning run.  Listen to this hyped-up crowd and hyped-up announcers.

September 15, 2011: Since we already picked on Bengie Molina, let’s also highlight a triple hit to complete the cycle by another very slow Giant, Pablo Sandoval. This, by the way, was ten years ago now, and no Giants player has since hit for the cycle. And to be fair, it was (a) in Coors Field (big outfield) and (b) required a couple of misplays (first by Carlos Gonzalez in right field and then an offline relay to third–I think a good throw gets him).

April 25, 2021: Another surprising and very recent triple was by Logan Webb in 2021. This is a particular treasure because it was energetically called by Kuiper, who missed a lot of games this year due to cancer treatments.

“C’mon, Webb! You got three in ya! Let’s go! And down the stretch he comes!”–Krukow: “That may be my favorite triple call–ever.”

September 5, 2021: Also in 2021, Steven Duggar hit a triple off Walker Buehler in a huge early-September game that literally won the NL West for the Giants (they won the NL West by one game and won the head-to-head season series with the Dodgers in this final game between them).

October 11, 2012: I’ll finish this triples retrospective with one of the most important ones in the championship era. This was in the pivotal Game 5 of the 2012 NLDS in Cincinnati, earlier in the same inning where Buster Posey hit the grand slam off Mat Latos. Matt Cain and Latos had each gritted out four scoreless innings in this winner-take-all game, and the stress level was rising. The Giants broke through in the top of the fifth on a triple by another noted speedster…Brandon Crawford, which scored Gregor Blanco from first. Grant Brisbee wrote an article early this year about “the most important at-bats in Giants postseason history,” citing an obscure stat called cWPA (championship win probability added). The top NLDS at-bat from the 2010-2014 run? Crawford’s triple off Latos. (Posey’s grand slam was #4. #2-3 involved Brooks Conrad in 2010, and #5 was Brandon Belt’s home run in the 18th inning of Game 2 in 2014.)

Crawford’s triple is at 7:10 in this video, and in perfect symmetry, there’s Brian Anderson–caller of Steph’s record-breaker!–again, reminding viewers that “Blanco can fly!”

So that’s all I’ve got for you, but I hope you enjoyed today’s meditation on the most exciting play in baseball and especially the trip(le) down Giants memory lane. Hang in there, folks, and stay safe. Lefty out.