The State of Baseball on January 24 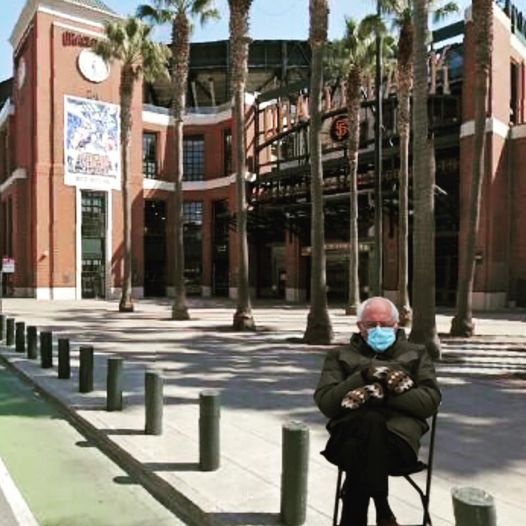 We miss baseball and Oracle Park too, Bernie. (h/t to ClutchUp)

So it’s over. The Trump administration is over, and our new President and Vice President have been inaugurated. It was also a (sadly) notable week for MLB, which lost two more Hall of Famers, first Don Sutton and then Hank Aaron. Aaron in particular was a special player and even more remarkable person, and his loss is huge. It also should make us cherish whatever time we still have left with the SayHey Kid. RIP, Hammerin’ Hank, and you too, Don (even if you were a Fodger).

With the NFL winding down, it’s time to really start anticipating the baseball season…or is it? I listened to a couple of podcasts in the “Locked on Giants” series, and the host, Ben Kaspick, noted that MLB is still telling teams to expect camps to open on schedule and to plan for a 162-game season. He also said, basically, “Yeah, we’ll see. 120 games sounds more feasible.”

I’m not really sure why he’s saying that. I understand that the pandemic is still a big problem, arguably even worse than it was when camps closed last March and when the abbreviated 2020 season happened late last summer. At the same time, they did figure out how to get the season in, the players want a full season for obvious reasons, and if the owners do, too–then I don’t see why we should expect anything different from what we’re being told. Furthermore, Commissioner Rob Manfred and the league can’t decide unilaterally to shorten the season; it would have to be agreed upon by the union, and it’s hard to see that happening at this point.

I actually would be fine with major league teams and those around them (coaches, clubhouse personnel, etc.) getting to cut in line for the vaccine. I figure I’m going to have to wait awhile regardless, so I might as well have all the baseball to watch while I’m continuing to hunker down here in COVID-ravaged California.

Greek Giant did a post several weeks ago about what he thinks about the various rule changes that were adopted to get the season in during the pandemic. I’m not going to revisit the debate but rather speculate about what might actually happen here, whether we like it or not. It sounds like it’s possible and even likely that all of the modifications that were made for 2020 will continue through 2021, at least in some form:

The Giants and Free Agency

Zzzzzzzzzzz. Literally nothing happened this week except that players who would have looked nice in orange and black signed with other teams. The most notable was George Springer, who signed with Toronto, but a number of pitchers signed on one-year deals for modest amounts of money ($8-11 mil or so). This made me query Andrew Baggarly about why the Giants weren’t in the mix for these pitchers (I get why they weren’t in on Springer), when it’s so painfully obvious that they still need help in the rotation. Here’s Baggarly’s comment on this from his article in The Athletic.

I totally agree that the Giants could use at least one more starter. Probably two to three more arms at least capable of pitching “bulk innings.” Part of the reason they aren’t snatching up multiple arms right now is that their 40-man roster is full and if history is any guide, they prefer to overstuff themselves with candidates on minor-league contracts that they can evaluate in spring training. I’d anticipate several more signings along those lines. The other assumption I’d make is that this front office likes to put the same or similar offer out there to multiple players and then see who nibbles. I wouldn’t be surprised if they made an offer similar to Wood’s to several of those other starters.

But to your greater point, I totally agree that this roster and upper levels of the organization do not have enough innings to cover a 162-game season.

Well, it’s nice to know that Baggs agrees with what I’ve been yammering about all winter. More, more, MORE starters for the rotation. And no, don’t say “Anthony Banda” or “Conner Menez.” They should be like the 10th or 11th options. And don’t say “Sean Hjelle” or “Tristan Beck,” either. I mean, Hjelle spent about five minutes in AA two years ago, and Beck never even got that far. You can say “Tyler Beede,” but he shouldn’t be counted on for “bulk innings.”

There has been almost no buzz about the Giants’ purported interest in signing a lefty bat, though I did see a vague tweet this morning suggesting they might be in the mix for Jackie Bradley Jr. In the post-Sabean era, dealing with Boras clients is no longer off the table.

Marcell Ozuna continues to be an intriguing possibility (though not a lefty bat), but I don’t think he’ll sign anywhere until this universal DH thing is resolved. Why would he? His market instantly doubles once that decision is made.

In sum, not much going on, and honestly, I’m getting annoyed and impatient with this cautious and cheap approach. At some point you have to actually make some moves, and no, I don’t see signing Alex Wood for $3 mil and one year as much of a “move,” though I guess it’s better than nothing.  Our own Crawnik asked Grant Brisbee about this in a Q & A this week, and Brisbee said:

I agree that this is something of a turning-point season for the front office, as at some point, they’ll have to go from the Padres of a couple years ago to the Padres of now. There are so, so many needs the Giants will have to address this offseason, the lack of long-term deals makes sense, even if it might be a little too cautious. Really, they aren’t going to have to sign a young player to a long-term deal for *years*, so the flexibility is all about what they can do next offseason.

I’m still wondering how all of this “financial flexibility” next year is going to mean much if they don’t have a credible team to attract free agents to. I mean no disrespect to Zaidi here. Some of his additions, like Yaz and Dickerson and Solano, have been brilliant, and I believe he can pull more of those out of a hat. I can look down the road and see something pretty exciting around 2024 or so. But how do we get from here to there?

In the last couple of weeks, the major prospect-ranking sites like Baseball America and Baseball Prospectus have dropped their new top-100 lists. The Giants did better with the BP list, placing four prospects (Luciano, Bart, Ramos, and Bishop) on the list, with Luciano in the top 10 (#8) and Bart and Ramos both in the top 35. One could also argue that Luis Matos should be on the list, and Seth Corry was on a MLB.com list at one point in 2019. BA has Kyle Harrison as the Giants’ top pitching prospect (and their #5 prospect). I’m not sure why Matos got the snub given how much buzz there was about him at the Alternate Site and especially the Arizona Instructional League in the fall. Yes, he hasn’t played above rookie ball yet, but there are players on the top-100 list who were just drafted last June and haven’t played an inning of pro ball yet.  Here’s a podcast where Josh Norris of BA discusses the Giants’ prospects with Roger Munter.

The fact is that it’s always hard to parse out these lists, and right now, with an entire minor league season lost to the pandemic, a truncated draft last June, and international signings only happening last week, it’s practically impossible. One good sign as to the Giants’ system is that when they added Carson Ragsdale, a recently drafted prospect from the Phillies obtained for Sam Coonrod, he didn’t crack their top 30 list on MLB.com, even though he’d been on the Phillies’ top 30. (Note that the MLB.com list has not been updated for 2021 yet.)

OK, that’s probably enough for now. I was thinking about a position-by-position comparison of the Dodgers and Padres, but I think this post has already gotten too long. (Hahahaha, not really. Nobody wants that comparison in TWG. It would just gross us out and make us sad, and there’s enough of that in the real world right now.)

Instead, I’ll leave you with a “howdy” from Johnny Cueto, who’s looking fit and happy here. Lefty out.