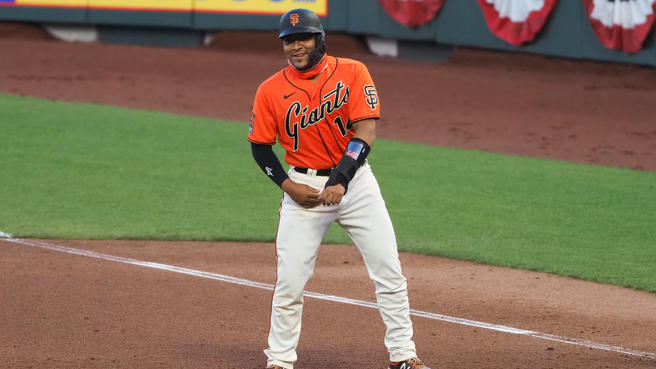 It was the first Orange Friday of the 2020 season at Oracle Park in San Francisco, and it arrived on what, in an alternate universe, would have been the trade deadline. Instead of a packed house of fans decked out in their most festive orange finery, there were cardboard cutouts and a handful of press and broadcast personnel.

But there was still baseball, and it was awesome.

Despite a very rocky outing by starter Logan Webb, who pitched in more traffic than I used to see when commuting through Los Angeles in the 80s, the Giants overcame early 1-0 and 2-1 deficits and ended up stomping on–or, as the headline to Henry Schulman’s gamer put it, “tromping on”–the Texas Rangers. The big hit was this three-run homer to left by Wilmer Flores, reminding us that this kind of moment–against a quality lefty starter–was exactly why Farhan Zaidi made Flores the first multi-year contract recipient of Zaidi’s tenure with the Giants.

Wilmer Flores hits a three-run home run in the 5th https://t.co/eAWJ4huCZ7 via @MLB

Turns out July 31 is a meaningful date for Flores. In 2015, he became famous for his tears on the field when he thought he’d been traded away from the Mets. Two days later, July 31, 2015, the not-traded Flores hit his first career walk-off homer to lift the Mets over the Nationals. As it turned out, the Mets won the NL pennant that year, so Flores–who stayed with the Mets after the trade fell through–got to play in the World Series.

So Flores’s three-run homer put the Giants ahead to stay, and they went on to finish off a highly uncharacteristic easy win. (If the 2010s were the “decade of torture” for Giants fans, I nominate the “decade of sluggers” for the 2020s. Who’s with me?) But the coolest moment of the night was seeing Chadwick Tromp get his first major league hit and RBI. And if this Zoom room moment doesn’t make you root for him, I don’t know what would.

"It's probably going to be in the middle of my house to be honest."

The First Week of Giants Baseball

OK, I’m much happier than I was a week ago today when I wrote this disgusted post. The Giants have since gone 4-2, and each of those wins was awesome in its own way–the two nail-biters at Dodger Stadium, the thrilling comeback/walk-off on Wednesday, and the gleeful butt-kicking last night. These Giants have been fun to watch, and I’m savoring it all that much more because I know it could all be taken away from us in a matter of days.

On paper, though, it shouldn’t be that fun to watch.

So how is it that they’re at .500 and tied for the second wild card spot? Well, I’ll tell you. They hit lefties. They’re in the top five in almost every offensive category when they face a lefty pitcher. They are now 3-0 against lefty starters. And as Alex Pavlovic points out, this is a good skill to have when they’re scheduled to play two-thirds of their games against the NL West. This is even without Hunter Pence, who was specifically signed for his strong track record against lefties in 2019, even having a hit so far this season (but they’re not giving up on him, according to manager Gabe Kapler). It’s also with Evan Longoria only playing in two games so far. It doesn’t hurt that breakout hitting star Mike Yastrzemski, the only lefty hitter in last night’s lineup, has very good reverse splits. (Indeed, his two career walk-off homers have both come against lefty relievers who are still wondering how that happened to them. Grandpa Carl had four career walk-off homers. Young Yaz is catching up quickly.)

Speaking of Yastrzemski, he’s currently third in the NL in hitting, third in runs scored, and third in OPS. An even more unlikely star has been 32-year-old Donovan Solano (a/k/a “Donnie Barrels”), who is second in the NL in hitting and second in RBIs. The two of them, with timely contributions from a few others (Flores, Ruf, Slater, Heineman, Tromp) are carrying the team right now.

Yesterday, MLB Commissioner Rob Manfred warned the players’ union that if they didn’t follow health and safety protocols and tamp down COVID-19 outbreaks (like the Marlins and now the Cardinals are having), he might halt the 2020 season as soon as Monday. Demonstrating that this wasn’t just bluster, the league has apparently warned regional broadcast affiliates to have alternate programming available from Monday onward.

While most of us could roll our eyes and say we saw this coming, it would still be sad if it happened. So far, it appears most teams have done a pretty good job of following the protocols. The Marlins, it appears, brought this on themselves through unsafe behavior while playing pre-season exhibition games in Atlanta–where, thanks to NBA player Lou Williams, we now are all aware that there’s a famous strip club that makes “excellent chicken wings.” The only good news is that so far they don’t seem to have passed the virus onto the Phillies, who played them last weekend. In contrast, the Giants haven’t had a positive COVID test since beginning summer camp. It would be a shame, and arguably quite unfair to teams that have tried hard to do everything right, if a couple of bad apples spoiled things for everyone.

So…enjoy the games this weekend, whatever happens. They could be the last ones we see for awhile.

Thanks to those of you on the previous thread who passed on birthday wishes and even excused me from doing a post today. Given how long I’ve waited to actually have baseball games to write about, I certainly wasn’t going to miss what very well could be my last opportunity (I hope not, but…).

Ten years ago today, I was at AT & T Park with family and friends, watching the Giants complete a three-game sweep against the Dodgers. Kershaw vs. Cain, and Edgar Renteria hit a two-run triple to lead the Giants to a 2-0 win. That game was famous for Renteria’s quote, “you never wake up the baby,” after Kershaw walked Aaron Rowand to get to him in the seventh inning of a scoreless tie. Kershaw would not be the last lefty ace in 2010 to regret messing with Renteria.

Since we both turned 60 this year, we did something fun for ourselves last month. We always name our cars, so meet “Gamer,” the new member of our family. Note the color scheme.

Have a great Saturday. Lefty out.