The World According to Farhan Zaidi 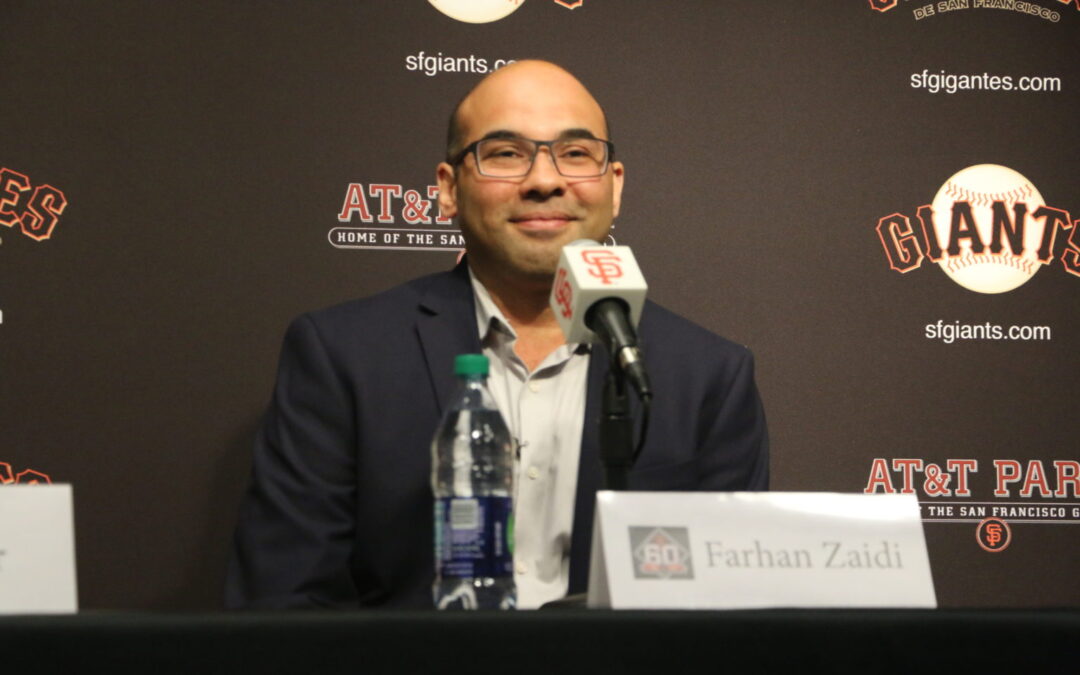 In this first post-Giants week (sob–I really miss them), there have been several opportunities for fans to get a sense of what the Big Boss, President of Baseball Operations Farhan Zaidi, is thinking about the near future, namely next year’s team. There was a post-mortem presser at the ballpark on Monday that also included manager Gabe Kapler, a podcast interview with NBCS-BA’s Alex Pavlovic, and an interview with The Athletic’s Tim Kawakami. While Zaidi was of course not showing all of his cards, there were several interesting things to glean from these various discussions. In this column, I’ll break it down for you a bit.

When asked about Belt, Zaidi said “he feels really appreciated and we appreciate him.” The Giants and Belt spoke about an extension during the season but talks didn’t go anywhere. Both sides want a reunion, though, and it shouldn’t be too difficult to find common ground.

What you should notice here is the turnover and the annual retooling. Even though it looks like there was continuity between 2020 and 2021 with three starters returning, in reality, Cueto was always a question mark (he hasn’t had a solid, healthy year since 2016), and Webb had spent 2020 looking like he should have a NOT READY, SEND ME BACK TO AAA sign pinned to his chest. Really, Gausman was the only sure bet. It was widely assumed that the purpose of the 2021 rotation was to pitch well enough to be traded en masse for prospects in July. Obviously that did not happen (yay!), but the upshot is the same: The Giants go into 2022 with only one starting pitcher (Webb) definitely under contract.

Here’s what Zaidi had to say about the challenge that faces him and GM Scott Harris, mostly seen in his interview with Kawakami: (1) He doesn’t expect to build the rotation entirely from one-year churn guys (as he has for the previous three years with Pomeranz, Smyly, Gausman, and so forth), but that strategy will still be part of the mix. (2) He does expect to sign at least one starter to a multi-year deal (and that could include one or more of Gausman, DeSclafani, or Wood). (3) He does not see the AAA trio of Beede, Long, or Sean Hjelle as part of the Opening Day mix. In his interview with Pavlovic, he specifically said he sees all three of them starting in AAA next year and hopefully as part of the “#7-10 depth”–meaning that a major league team needs to be 7-10 deep in starting pitchers to get through a long season, and maybe one or more of those younger pitchers could be ready to help the big club later in the year. Beede, of course, is the most interesting of the three because he is both out of minor league options and eligible for salary arbitration.

So taking all of this together, the best guesses as of right now are:

There are a bunch of other factors that will come into play that are very hard to unravel at this early stage, such as what the markets are like for Belt, Bryant, and Gausman, the huge number of prospects they’ll have to consider protecting from the Rule 5 Draft (I’ll probably do a whole column on this later), and who’s out of options for next year. To the latter point, here are some notable out-of-options guys.

Some notable #SFGiants who are now out of minor league options:

This will be a significant factor heading into 2022, and it will likely drive some offseason activity.

Anyway, this has the potential to be one of the most interesting off-seasons for the Giants in many, many years. The combination of raised expectations, needs, and expanded resources ($$$, a strong farm system) should make this intriguing (and maybe nerve-wracking) to follow.

I’m only briefly and sullenly commenting on the ongoing postseason because I’m still salty that the Giants made an early exit. But congratulations to Dusty Baker, returning to the World Series for the first time since 2002. I know some Giants fans still hold a grudge against him, but I’m not one of them. I loved Dusty as the Giants manager, and that was a fun 10-year run, beginning with the epic but heartbreaking 1993 season and ending with the even more devastating World Series loss. Bay Area sportswriters were all over Twitter last night gushing about how happy they are for Dusty and what a great person he is. It was fun to see his son Darren in photos with him last night. We all remember how Darren was a three-year-old being rescued by J.T. Snow in Game 5 of the 2002 World Series (that photo is up in the Hall of Fame, by the way), and now he’s a minor leaguer.

The Dodgers and Braves play Game 6 of the NLCS tonight, and last night came the stunning news that Max Scherzer had been scratched as the Dodgers’ starter. Walker Buehler is now going to start on short rest. Beyond the obvious immediate implications of this development for the NLCS, there may be longer-term ones for Scherzer’s impending free agency. Is Scherzer injured? Will he have a harder time convincing prospective employers that he’s not damaged goods? And if he’s injured or at least has a bit of dead-arm stink on him, will that sour his relationship with the Dodgers as a prospective suitor? Is he mad at them, or are they mad at him? Can they commit to a risky new contract with Clayton Kershaw–a #ForeverDodger who might be a ticking Tommy John time bomb–and a contract with a worn-out 37-year-old Scherzer?

All that said, the Dodgers could still win two in a row in Atlanta and go to the World Series. After last year, we’re all going to doubt the Braves until they give us a reason to stop.

But enough about them. Giants fans should start dreaming on the bright future we’re going to watch unfold. Should be fun. Lefty out.